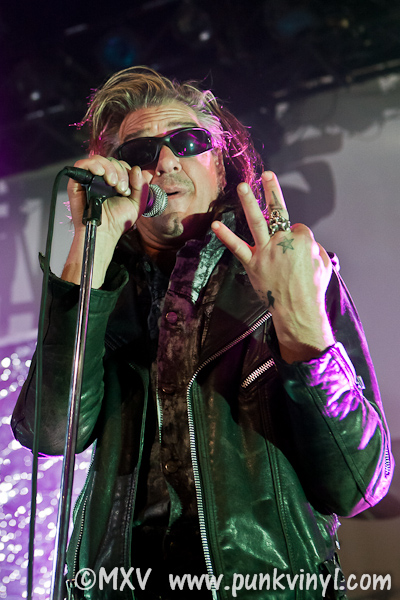 Saturday night was the second night of the Wax Trax Retrospectacle. With the first night being so good, expectations were high for the second night. The same people flooded into the Metro and parked themselves in almost the same spots as the first night. It was as if no one ever left from the night before. The people in the crowd all seemed very happy, a feeling that stuck with them from the previous night and you could once again feel the excitement in the air.

The first band that played was Blue Ribbon Glee Club. They had about 20 people on stage singing a capella and one stand-up drummer. They did covers of old punk rock and new wave songs. They did “California Uber Alles” (Dead Kennedys), “Uncontrollable Urge” (Devo), and “Ever Fallen in Love” (Buzzcocks). Eric Spicer (of Naked Raygun fame) came out to join them on drums and they did “I Will Refuse” (Pailhead) and Paul Barker (Ministry/Revco) also joined them and they did “Every Day is Halloween” (Ministry). If you are going to do old punk/new wave cover songs, this was certainly the most fun way to do it. It was immensely original and entertaining and was a cute and light-hearted way to kick-start the show.

The crowd at this point was once again packed to the rafters and anticipation was very high for Revolting Cocks. This version of Revolting Cocks featured Chris Connelly, Paul Barker, Luc Van Acker, Jamie Duffy and two other fellows. It was far more authentic than the band that was touring with that name two years ago that featured not a single original member, and only one that played on any of the good records. The band members walked out on stage to a gigantic applause and they immediately started playing one of the band’s crown jewels, “Beers, Steers, and Queers”. Chris Connelly handled the vocals for this song and did an amazing job. Chris is one hell of a front man and has been for years so it was no surprise that despite his not having sung the original song he did just as good of a job and didn’t even need a megaphone to pull it off.  The drums sounded great and during the chorus the guitar/bass sound was really powerful. During the song the band tossed cowboy hats into the audience who promptly put them on and danced around wearing them. From there it was a set of Revco’s greatest hits. They played “Something Wonderful”, “Stainless Steel Providers” (which sounded as good as ever), “Physical” (in the officially released version, not the original that had more faithful lyrics), “No Devotion” and “Do You Think I’m Sexy”. Chris and Luc Van Acker shared the vocal duties depending on which songs they were performing. The whole set was as close to a perfect Revolting Cocks set as you would want and the only thing that kept it from total perfection was their not playing “Cattle Grind”.  They more than lived up to people’s expectations and they showed the world (or at least the city of Chicago) how a Revolting Cocks performance without Al is supposed to be done.

My Life With the Thrill Kill Kult, easily one of the best bands Wax Trax Records had (at least for the band’s first two albums and first three singles), would close the show this evening. When the lights dimmed the familiar atmospheric droning intro to “Shock of Point 6” started as the band took their spots on stage. This was as perfect of an opening for a Thrill Kill Kult show as you could hope for with them opening up with the best song from their first EP! Much like Front 242 there existed two eras of Thrill Kill Kult: the good, harder edged version and the bad disco version. We got the good one! The band played the most perfect TKK set list possible. They played only the songs from the great records with the newest one, which was also their last great Wax Trax record, being, “Cuz It’s Hot”! The band sounded in fine form. Frankie’s voice was a lot more horse and raspy than when they were at their heyday but it still fit perfectly with the music. The band which featured Marston Daley playing all keyboards/samples/electronics, a female bass player, a live guitar player and drummer, played wonderfully energetic and faithful renditions of all the band’s greatest songs. Their campy devil imagery and hard-edged industrial dance songs sounded as good this night as they did twenty years ago.

The many highlights of their set included “And This is What the Devil Does”, “Nervous Xians”, “X Communication”, “Do You Fear For  Your Child”, “Burning Dirt”, “A Daisy Chain 4 Satan” and of course “Kooler than Jesus”. The only two big omissions were “Ride the Mindway” and “These Remains”. In the later half of their performance the Bomb Gang Girlz joined them on stage to dance and sing backups too giving another nod to the band’s early days and making their performance of only older material feel even more like it did back in the old days. The band really delivered the goods this evening and kudos for them for keeping it authentic for the time period being honored and celebrated this evening.

The Wax Trax Retrospectacle ended up being even better than anyone could have anticipated. Every single band these two nights played amazing and authentic sets and the crowd was completely respectful and happy. The show was a very fitting tribute to Jim and Dannie and the two evenings were filled with fun and nostalgia for a very special time that sadly is long gone and cant’ be repeated but will never ever be forgotten.