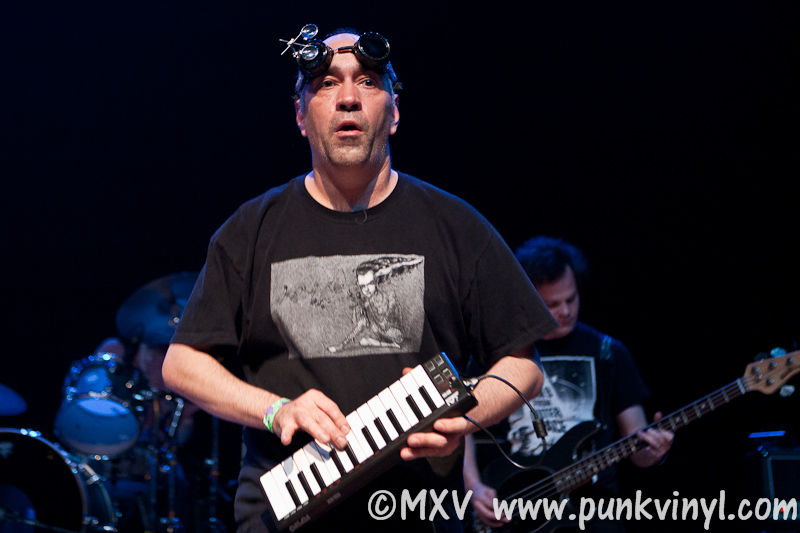 The Dead Milkmen 4/30 at Congress Theater

Saturday night the Congress Theater was the host of the long-awaited return of the Dead Milkmen. This historical band ended their retirement recently and started playing and recording again after more than a decade of dormancy. They had a fan favorite playing right before them in the form of the Lawrence Arms.

First up was The Holy Mess. They were a hardcore band with a melodic edge to them. They sounded a bit like early NOFX and while they weren’t overly original they were fairly harmless and put on a decent set. In what was clearly poor judgement, they had a jar of pickles on stage with them and felt it necessary to throw pickles into the audience which they just used to throw around the club and make a mess.

The Reaganomics quickly followed. They seemed a little green and that they really liked Dillinger Four. They probably should have switched spots with The Holy Mess as they were upstaged by their predecessors. To their credit their set was fairly short so they didn’t wear out their welcome on the stage as the crowd was getting really excited and packing in front for Lawrence Arms.

The crowd magically grew to a very large size just in time to see The Lawrence Arms put on what could have been one of their best performances ever. They came out on stage and the crowd went nuts. The band played the entire Greatest Story Ever Told album from start to finish to the delight of the entire audience. There was a non-stop sea of crowd surfers being passed over the barricade which kept the security guards busy and must have taken its toll on a few of their backs. People were singing along to the choruses to every song. The band played flawlessly and with a ton of energy. They set the bar so high that the Dead Milkmen really had their work cut out for them and don’t be surprised with more shows like these the Lawrence Arms may be headlining this venue someday.

The crowd had shifted and more of the older folks made their way to the front of the room for The Dead Milkmen. The band came out blazing full of energy. The lead singer was running all over the stage and often times hopped off into the barricade to get closer to the fans. For an older fellow, he had the energy of a teenager and never showed any signs of being winded. He also had a smile on his face the entire show. Between songs he would talk a lot to the audience and had a really friendly vibe. The band pretty much put on a greatest hits show and included a few new songs.

When the band was ready to play some new songs, Rodney (lead vocals) gave the crowd some really humorous instructions on how they can sing along to the songs they haven’t heard yet and how someday these could be the songs they love the most. It was really entertaining and the crowd seemed to enjoy it as well as the new songs.  The new material fits in perfectly with their older stuff too so it was nice to see they haven’t lost their songwriting magic. Rodney brought up a young member from the audience who he gave a crash course in how to play the keyboard part to “Bitchin’ Camaro” before he proceeded to have said audience member follow him around the stage and sing along. They also threw in their immensely “Punk Rock Girl” in the middle of their set which saw most of the audience singing along to.

The band played nearly 90 minutes and it was non-stop energy from start until finish. They even did an amazingly good cover of Ministry’s, “Stigmata” which was completely shocking as well as an Orbital cover. They put on a really strong show that was great, light-hearted fun that more than warranted the price of admission for the audience.