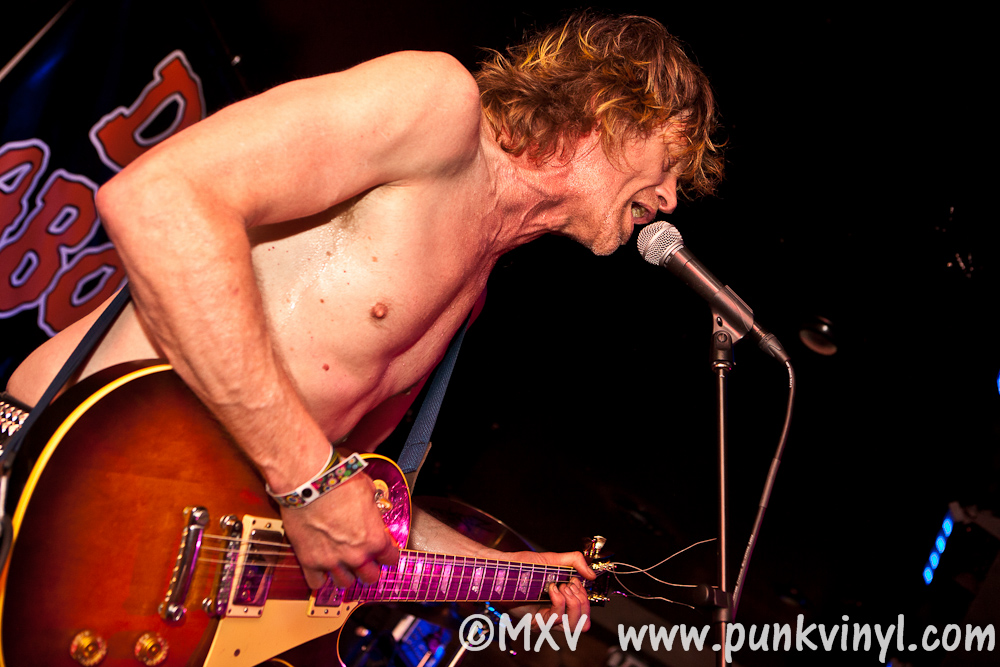 Last night two legendary hardcore bands from the 1980s joined forces to play together at the Cobra Lounge. One of the bands hadn’t been here in well over two decades, if not longer despite the fact that they never stopped playing. Those bands were the Dayglo Abortions and Verbal Abuse.

Chicago natives, Eske, took the stage first. They were a band of heavyweights and one super heavyweight who played speedy hardcore songs. Their songs were fairly short old school bursts of energy. They had one tempo: fast, and it was a good one. They played about a half hour and the singer talked a lot between songs. They were quite entertaining in a retro-hardcore type way which was perfect for this bill.

Pilsen’s finest, I Attack quickly followed. Singer, Rob V was fresh out of the hospital after having his head split open but he didn’t let that slow him down much and the band put on another in a long line of solid performances. They played some older and newer songs and were very tight and energetic. Rob wasnt’ as animated as he normally is during a performance due to the head trauma but having his bell rung didn’t affect his vocals one bit. They are among the finest active hardcore bands in Chicago and always worth a listen or three and it’s great to see them still plugging away.


I Attack (click any thumbnail to see full images/slideshow)

Verbal Abuse celebrated 30 years as a band by taking the stage third. They played a blistering sit of mostly older classics. It was amazing how tight and powerful the band sounded. They played like the seasoned veterans they are. Singer Nicki Sicki growled and grunted his raspy vocals with a lot of energy and sounded as powerful as the band. They played a new song or two which sounded just like the older songs and fit in nicely with their rock-solid set. The crowd went nuts during their set as most of them were quite tipsy by the time the band started and when Nicki decided to hop down off the stage and sing in the crowd, they went nuts crowding in front of him to sing backups or just show off their goofy slamming techniques. It was a fun set and these guys proved that they still have it in the live setting.

The Dayglo Abortions took the stage to a suddenly packed room full of drunken fans eager to see them play after so many years waiting. They are now a three-piece band which includes a blind drummer. Yes he is actually blind. Apparently he doesn’t need to see his drums in order to play them amazingly as he was one hell of a precision drumming machine when the band got started. The band played a lot of material off the Feed Us a Fetus LP which contains their absolute best material. Singer/guitarist Cretin talked a lot to the crowd between songs and he wailed away on his guitar pulling off lighting fast leads during their fast hardcore songs.

The crowd danced, drank, sang along and even got in fights during such classics as “Stupid Songs,” “Argh Fuck Kill”, “Bedtime Story” and countless others. They played some more recent material as well sprinkled in there with the hits. One of the absolute highlights was “Scared of People” which they played near the end of their set and it was perfect. The band played with such youthful vigor as if they had bellies full of fire and they sounded incredible. Their playing was extremely tight, fast, and powerful just like their old records were and their performance was a great way to finish off a very entertaining show and was well worth the two-plus decade wait for them to play a show here. Hopefully it won’t be two more before they come back again!