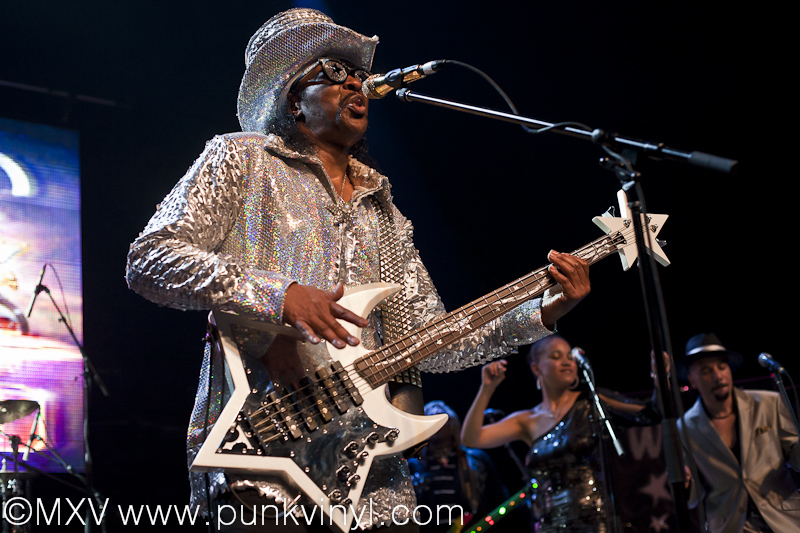 Friday night, Funk icon Bootsy Collins made his long, long-awaited return to the Windy City to play a show at the Congress Theater. Bootsy didn’t skimp on the production either as he brought a 13 piece band with him to bring the funk to the Congress.When the doors opened the line of eager fans was winding around the corner and down the block.

After some DJ played songs off of his laptop for an hour or so, the stage was cleared of his gear and Bootsy’s band took the stage and started playing. While they played, a man who turned out to be Booty’s son sang a song and introduced the band and when he finished with the introduction, Bootsy strutted out on stage complete with his Space Bass and was wearing a red glittery outfit and platform boots.

Bootsy’s bass, as you would expect, was prominent in the mix and it sounded great. The man is a skilled and unique bass player and his crafty bass lines laid the foundation for the extended funky jams he and the band performed. The band would seamlessly blend one song into the next at times and at other times they would stop between songs and Bootsy would talk to the crowd about the funk, some of his history, and would give verbal tribute to musicians and people who were an influence on him. He was very charismatic and was every bit as enjoyable to hear speak and he is a musical performer and singer.

At certain points during the set, Bootsy would leave the stage and the band would continue to perform a song or two which were usually long extended songs. When Bootsy would return to the stage, he’d be in a new costume and they’d bust out some more fan favorites. During one of these breaks, the band did a great rendition of “Purple Haze” which one of the other bass players performed vocal duties on.  The crowd was eating up every song like candy and dancing and singing along and the audience as a whole seemed to be really enjoying the show and never stopped smiling.

When it was all said and done, Bootsy Collins and his incredibly diverse and talented band of musicians played around three hours. Near the end, Bootsy had the crowd part in the middle like the Red Sea and came out into the audience to sing with them and wandered and danced all around the front half of the main floor. The crowd had an amazing time and he put on one of the most entertaining and downright fun shows ever to be held inside the Congress Theater.

Check out more photos from this show right here.