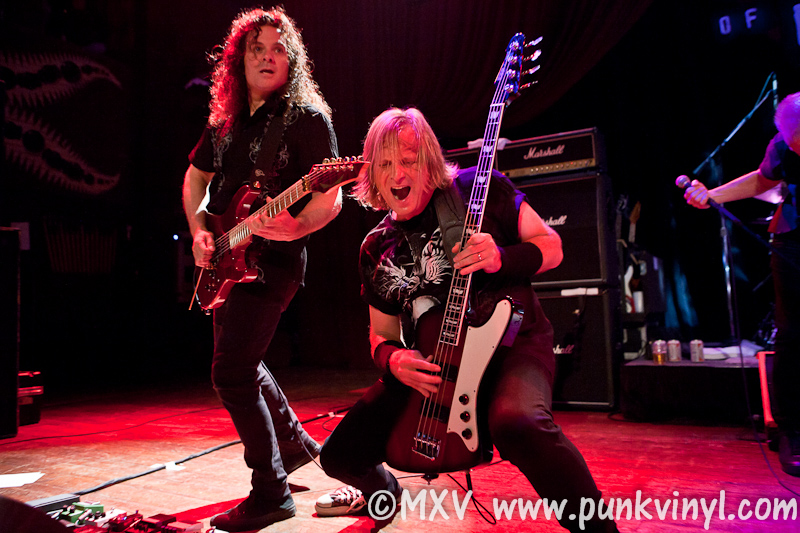 Friday Night the House of Blues in Chicago was packed full of old rock fans eager to see the return of legendary rock and roll band, UFO. The band has gone through a number of lineup changes over the years but has been coming and going since they formed around 1970.  It has been a long time since any version of the band toured and the crowd was buzzing all night long with excitement for the band’s return.

A band from Brazil, Mindflow, opened the show. They played a sort of progressive metal. At times they had a rather 80s retro sound and then at times they sounded a bit more modern. They played a 45 minute set and had a lot of energy while they played but their overall sound ended up being a little generic. They seemed like a really good bar rock band that was a little out-of-place in a big club like this opening up for a well-known act.

Byrd from WLUP (probably Chicago’s longest running hard rock station) came out and introduced UFO. The band came out and immediately started playing and the crowd of mostly older people who were probably in high school when the band was at their peak started clapping and cheering.  They opened with “The Wild, The Willing and The Innocent” and the band was all energy and smiles from the first chord. Their bass player, Pete Way, was especially animated. Vinnie Moore and Paul Raymond shared guitar duties with Vinnie playing lead and both of them were spot-on and didn’t miss a lick and played like master technicians. Paul also handled the keyboard duties too and would switch between those and the guitar based on what song was playing. While they played members of the audience sang along and even played air guitar and all these old rock fans were channeling their youth and having a good time.

Lead Singer, Phill Mogg, spoke a lot between the songs and was very personable. He also sang like a champ and age has been extremely kind to his voice as he sounded great. The band focused heavily on their classic older material and songs like “Too Hot to Handle”, “Doctor Doctor” and “Lights Out” sounded amazing and had the entire audience singing along to. The band played an amazingly long set and never showed signs of tiring nor did their energy level diminish at all during their set. When all was said and done including the encore they played for close to two full hours and proved that age has no bearing on a band’s ability to deliver the rock in a very entertaining way and give the crowd an amazing performance that was well worth the fans’ money.