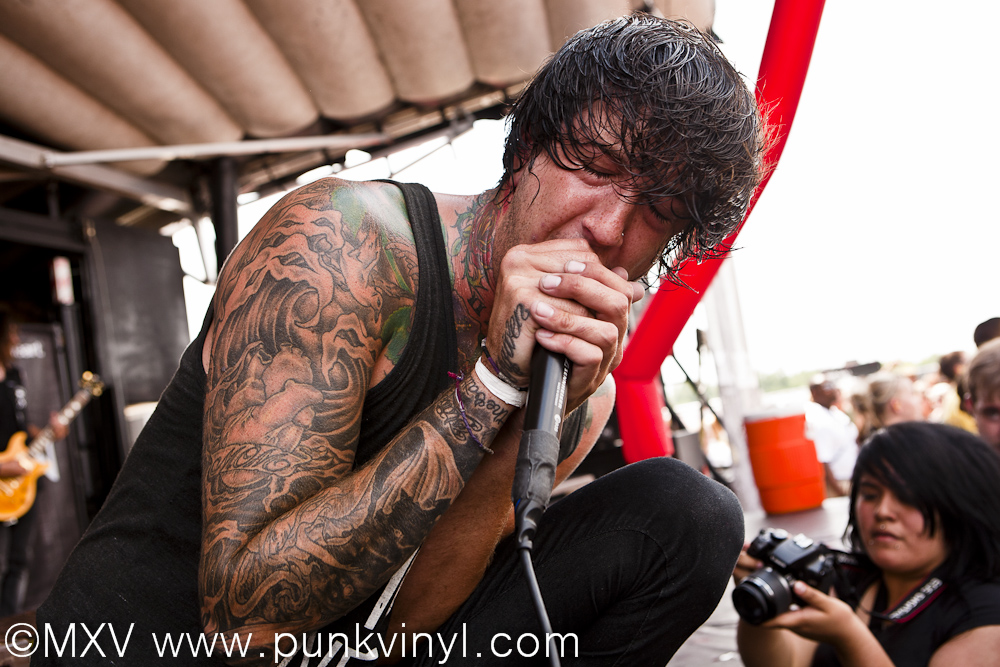 A hot Saturday in July could only mean one thing, time to get out in the sun and go to the annual Vans Warped Tour. Warped Tour easily has to be the longest running summer festival and it shows no signs of stopping anytime soon. The festival was held in its usual spot at the First Midwest Bank Amphitheater which is an outdoor venue in Tinley Park, IL. As usual there were more bands than you could count, let alone see all in one day thanks to there being at least five stages that had a non-stop group of bands performing all day long with only a few minutes between sets for rapid fire equipment changes. It is pretty amazing the speed and precision that they set up and tear down each bands equipment.  When you attend this fest, you have to map out what bands you want to see based on what times and what stages any particular bands that may interest you are playing. In between there is plenty to do in the way of shopping, video game demos, bands signing autographs and overpriced food to consume. The place is sensory overload and can easily drain your wallet in no time flat.

I Set My Friends on Fire made a return to the tour this year. Little has changed in their sound since their last outing and that is a good thing. They were easily one of the best bands of the day playing a chaotic whirlwind of sound that saw metallic screaming post-hardcore mixed with electronic elements. They’d be playing full blast near-grindcore bursts of powerful metalcore and then out of nowhere suddenly shift to playing some melodic passages with actual singing. They really keep the listener on their toes with all the random shifts in sound but the meat and potatoes of their sound was really heavy and fast with excellent screaming vocals. The lead singer’s giant head of hair was equally impressive.

I Set My Friends On Fire

Good Guys in Black seemed conflicted between sounding like a sing-along punk rock band not unlike later period Adolescents or Descendents, and a rock band with hip-hop influences. The stuff that was like the former should be the style they stick with. While they weren’t overly original sounding with it they played it well and had a few catchy tunes.

Less Than Jake once again took one of the main Warped Tour stages and put on a clinic of ska infused sing along punk. They were their usual fun and energetic selves and were nothing but smiles from start to finish. They attracted quite a large group of spectators for their set and all the motion in the crowd made the outside temperature rise another ten degrees. They were another highlight of the day’s performances.

Of Mice and Men played to a large rabid crowd on one of the bigger stages and turned the crowd into a not stop game of human bumper cars. They played a metalcore/emo hybrid that had they play very heavy verses with a lot of aggressive screamed vocals and then they’d switch to melodic emo choruses. The crowd went nuts for it the entire time and the band themselves rarely held still and played with a ton of energy and enthusiasm.

Of Mice and Men

The Ready Set were a straight up pop band complete with some electronic hooks and a radio-friendly sound. The singer looked like a cross between Justin Bieber and Damen from the Vampire Diaries and looked very young which fit with the young and giant crowd that they attracted. It was also clear this kid was the star of the show and the rest of the band was likely hired hands to provide the live sound. The songs were very accessible and melodic and the young ladies were swooning as the singer danced all over the stage.

Five bands down and there were still tons to go. Check back tomorrow for part two.