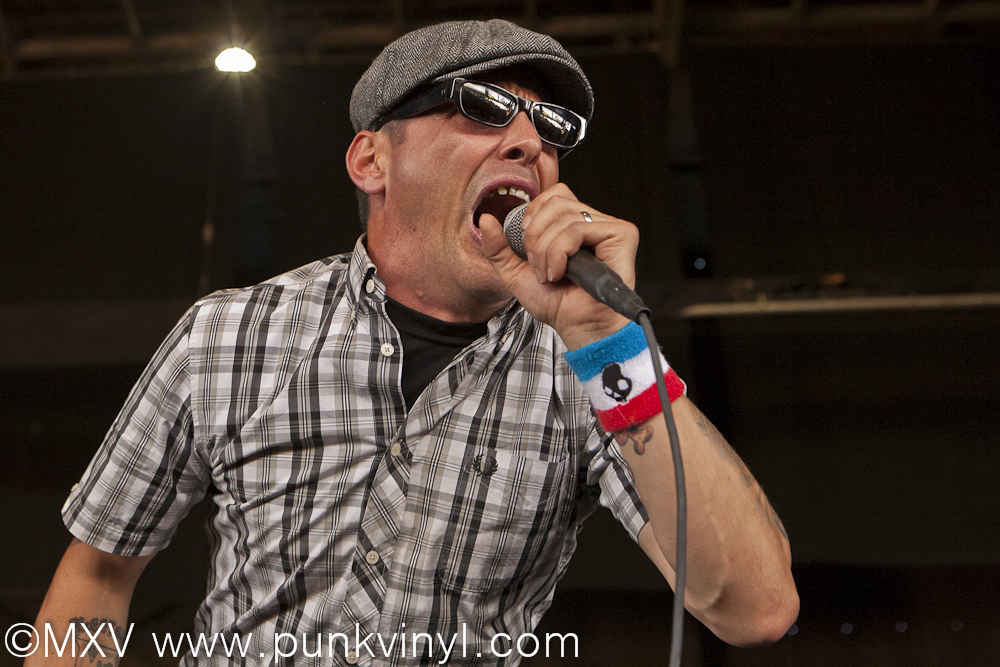 As the temperature continued to rise and the sun was burning the thousands in attendance at the Warped Tour, the bands kept on a playing. The heat didn’t do anything to prevent people from having a good time and everywhere you walked there was an endless stream of people moving about.

Hello Goodbye took the Nintendo 3DS stage inside the pavilion during the middle of the day which many people flocked to in order to catch some shade and cool off. They played slightly quirky pop songs that had a bit of a retro feel to them. Their singer/guitar player looked a bit like a young Buddy Holly. The fact that they named themselves after a Beatles song is very fitting to their short indie-pop style.

Boston’s Street Dogs took the stage as one of the only traditional punk bands on this year’s tour. They always put on an entertaining set and this was no exception. You can’t help but get sucked into their high-energy sing along street punk. The singer jumped off the stage onto the step inside the small distance in order to get near the crowd to sing with them. He did this a couple of times and the crowd went that much crazier each time he did it. It is highly unlikely that the Street Dogs are capable of putting on a bad show when they are playing their own songs. It’s when they play Black Flag covers that things go sour, but thankfully that didn’t happen this time and they were probably the best performance of the day.

Another band that is familiar to recent Warped Tours, A Skylit Drive, took one of the bigger stages in the sun to play to an eager group of young fans. They have the formula of post-hardcore mixed with emo down to a science. The screaming and aggressive parts were great but the melodic vocals were a bit too whiny and kind of detracted from the good parts. The kids sure didn’t seem detracted by it so perhaps you can chalk the opinion up to a generation gap because the crowd were climbing all over themselves and never held still which kept the security staff quite busy fishing bodies off the crowd or catching them as they were being passed over the barricade.

Every Avenue is another Warped Tour familiar. They play pop punk with a stronger emphasis on the pop. Their songs were super melodic with choruses the crowd seemed to be knowledgeable of as many were singing along to them. For being a modern pop band they were pretty good at what they did.


Every Avenue (click any thumbnail to see full size images)

Attack Attack! played an outside stage and were apparently quite popular with the masses as they too drew a huge crowd. They played that mix of metalcore with melodic pop choruses but the vocals in the choruses were a lot less whiny so it worked a lot better than some of the other bands of this style. They were non-stop energy and the band member never stood still for more than a half of a second at a time. One of the guitar players busted out a super soaker and doused the crowd during one song which was probably nice for those that got showered as it was well over 90 degrees out there and you can probably add another ten degrees to the heat in the crowd who like the band, never held still.

As the sun started shifting to the west, the heaviest band of the tour would take the stage next among others. The third and final part of Warped Tour 2011 will appear tomorrow.