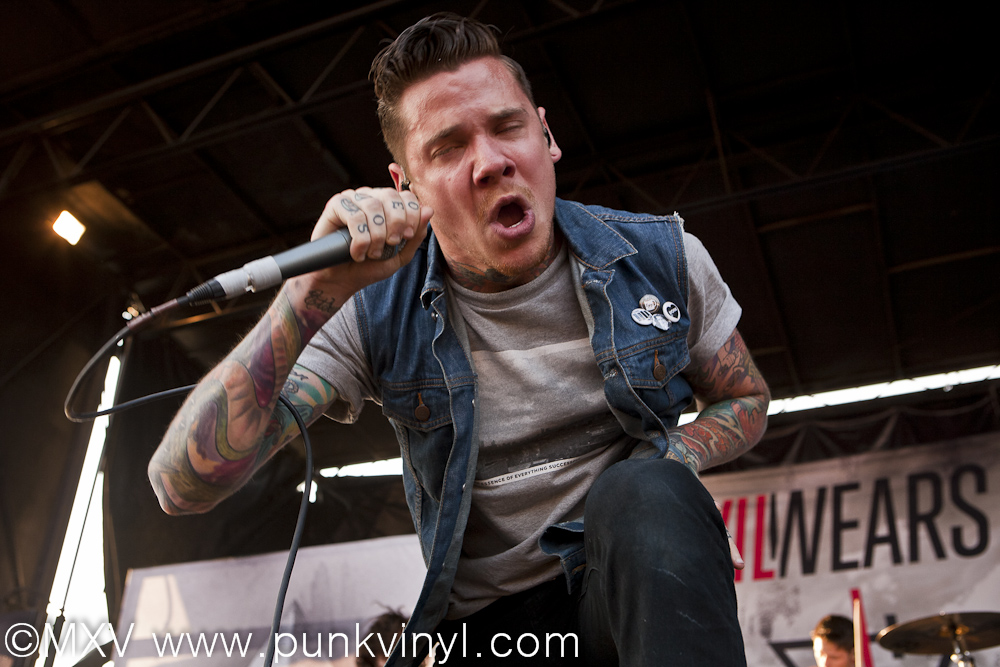 The sun shifted to the west as the day-long Warped Tour continued on and a nice breeze started moving through the area as the bands performing continued to turn on their own kind of heat. The heaviest band of the day was about to take the stage and they’d really stand out among the many bands playing that day.

The Acacia Strain looked pissed off when they took the stage which totally fits in with their style of super heavy and aggressive music. They instantly tore into the most brutal and punishing set of the entire Warped Tour. Crushing doom guitars with super chunky riffs and rapid fire drums set the foundation for the deep guttural vocals their singer spewed forth. The guy is as large and menacing looking physically as his voice is audibly. Those in the audience who were fans got a pit going and proceeded to bash the crap out each other in appreciation of the face-melting power being hurled in their direction from the band on stage. They easily stole the show and are a band well worth checking out as they are even more powerful live than is captured on their records.

A band that was a total opposite of The Acacia Strain took the stage nearby and that band was A Simple Plan. They had no meaty riffs, no evil sounding vocals and they couldn’t be any less pissed off. These guys were full on melodic pop with sing along melodies and positive vibes. They also smiled a lot. Their audience was also a lot younger and contained a lot more females than the former’s too. They were quite a hit with the crowd they attracted and it was a neat contrast to what had just taken place at the nearby stage which showed how diverse the Warped Tour can be at times. Now if only they’d sprinkle in a bit more of the heavier bands then they’d have a perfect balance.

Chicago’s own Medina Lake took the Ernie Ball stage. They played electronic laced melodic rock. They were a bit heavier than A Simple Plan but equally accessible. The electronic parts gave them some much appreciated depth to the songs and it’s something they shouldn’t abandon.

The Devil Wears Prada were another band returning to the Warped Tour after taking a year or so off. In their time away they seem to have gotten faster and more intense. They came running out on stage and playing full speed and the singer did his best to run a marathon around that stage as he was flailing about constantly. They were pretty crushing in their metalcore delivery and it seemed that they scaled back the melodic parts of the songs as they were kept to a minimum. Next to The Acacia Strain they were easily the second heaviest band on the bill and the crowd kept the security guards beyond busy as they were constantly crowd surfing and flying over the barricade. Where the crowd found the energy after a full day in the heat will go down as one of life’s great mysteries but it’s likely that The Devil Wears Prada infused them with a second wind.

Dance Gavin Dance were one of the last bands of the day. They mixed post-hardcore with melodic emo pop. They had two singers: the one that screams and the one that sings. The screaming parts were cool, the melodic parts were less cool. They had some interesting guitar noodling during some of their passages and that made the aggressive parts more enjoyable and sort of maintained a sense of melody underneath the aggression.

A Day to Remember were the last band of the day. They were a melodic rock band with sing along choruses that was the most dominant style of band on this year’s Warped Tour. They got the audience moving around quite a bit and drew a large crowd as well due in no small part to there only being one other performance going on at the same time on the other side of the grounds. They closed their set as the sun was vanishing and left the large crowd satisfied and exhausted. The book was closed on another Warped Tour which sadly meant summer is more than half over but it’s a safe bet that it will be back again next year.


A Day to Remember