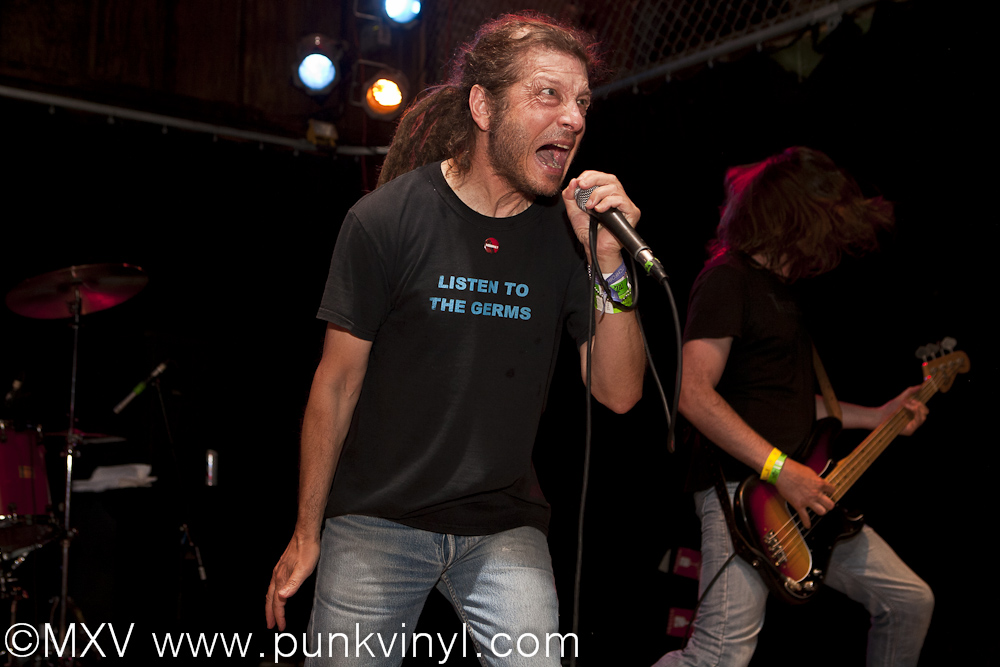 Pitchfork weekend in Chicago means there’s a lot going on in the world of the Chicago music scene but all the action isn’t limited to that hipster-friendly festival. Over at Reggies last night they were doing a sort of Pitchfork Fest “after-show” featuring OFF! and three local bands. OFF! played the day before at the Pitchfork Fest but for those who don’t like sitting out in the scorching heat with half a million people crowding their personal space, the opportunity to see them at one of the best venues in the city wasn’t one to miss.

The Vicelords played first. If their blasphemous act of covering the Minutemen’s “Bob Dylan Wrote Propaganda Songs” wasn’t enough of a turnoff, the fact that their singer had to read the lyrics off a piece of paper while they “performed” this travesty was the icing on the shit cake they baked.

All Eyes West featured the “man of a thousand bands” Jeff Dean on guitar. They had a 90’s post-hardcore sound that would fit in well on the Dischord label with really catchy yet loud guitars that drove the songs and some great bass lines. Their singer has this really great voice that was raspy yet melodic in the way that Jawbreaker was in the 1990s. If you mix the loud Chicago punk guitar sound with that early 1990’s DC sound you know what these guys were like. They were really, really good and should have played third. Hopefully these guys stick around and play more often as they are one of the best bands around the city today and a breath of fresh, yet familiar air compared to what’s popular these days.

Ratasucia played third. They played pretty catchy melodic punk rock with a nod to the late 1970’s in the guitar sound. Most of their songs were pretty catchy and they did a good job but All Eyes West set the bar so high that Ratasucia suffered for it and their set seemed to be a little on the long side. Still, sitting through their 40 minute set wasn’t a bad way to kill some time.

The crowd almost filled up the entire club as Dimitri and Steve from OFF! were setting up their gear and preparing to play. Everyone in the audience looked excited and the audience was a nice mix of younger fans who wouldn’t have been old enough to have seen any of the members of OFF!’s previous bands, and some old timers too as well as in-between. It took all of about 30 seconds for them to start moving around once the band started playing, which is about 1/3 of the length of most of the band’s songs.

The music of OFF! is somewhat similar to early Black Flag. This isn’t just because Keith Morris was the first singer of said band. The songs are very loud, short, and powerful blasts of urgent aggression. The vocals are delivered in the classic Keith Morris style that made the early Black Flag and Circle Jerks records so memorable. The band has the energy of a pack of pissed off teenagers which is beyond impressive for a band who have members that are now reaching middle-aged. They also manage to play a classic old school punk/hardcore sound without sounding dated or a cover band. OFF! are like a good pair of shoes that feel immediately comfortable when you wear them, even when you are breaking in a new pair.

The band played nearly their entire recorded works, which isn’t a hard feat considering they only have a handful of 7″ EP’s out and their songs are mostly very short. They never showed signs of getting tired and the band played every song with amazing energy and intensity. Keith Morris sounds as good now as he did back in the early days and proved that he is still one of the best front men in punk rock. He talked a lot in between songs about a variety of topics including what certain songs like “Jeffery Lee Pierce” were about and talked about the history each member of the band. When they played, the crowd went crazy for each song and it was impressive to see how many people in the audience seemed to know many of the words to the songs already considering the band is still in its infancy.

When the smoke cleared the band played about an hour which included a two song encore. They really delivered the goods and proved that they are certainly worthy of all the hype they’ve been getting over the past year. The sweat soaked crowd looked completely satisfied when the lights went on and the people were filing out of the club.