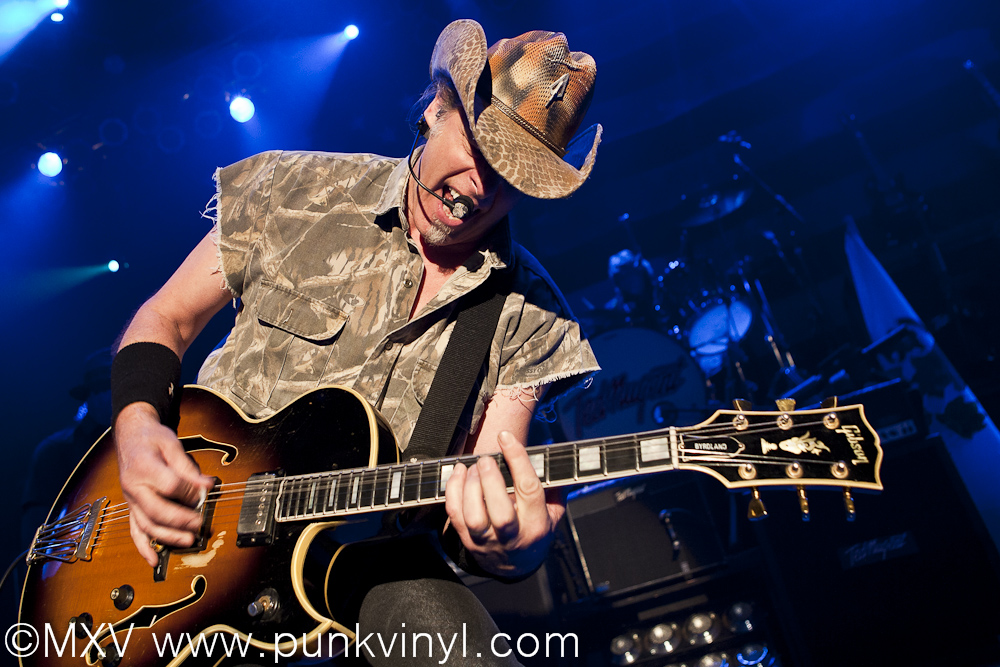 It’s the middle of summer which means electric bills are on the rise as people crank the air conditioning and it means that Ted Nugent puts down the rifles and bow and arrow and picks up a guitar instead and hits the road. The Nuge made his return to the House of Blues last night while on the “I Still Believe” tour. The doors opened nearly 90 minutes before the show started and an eager group of Ted Nugent fans already filled up the main floor long before the opening band took the stage. It was a mostly older audience in attendance last night but there were a few younger folks scattered around the crowd. One thing nearly the entire crowd had in common was they all sure seemed to like to drink. A lot!

Brent James and the ContraBand opened the show. They played a bluesy classic rock that was a little reminiscent of Aerosmith. In fact the lead singer seemed to have been inspired by Steven Tyler in his look (sans the scarves, and shoes too). They were a talented group of musicians and some of the crowd seemed to enjoy them but most of them seemed impatient wanting Ted Nugent to play and were counting the minutes until they were done. They played a half hour set and their last song was a rather lengthy jam that would have been a lot more appropriate had they been a headliner and not an opener.

After about a half hour of waiting for sound checks and stage preparation, the curtains opened to reveal a lot of smoke and Ted Nugent wailing away at his guitar and screaming. The crowd roared with approval and Ted’s noodling went on for a couple of minutes and then the band started playing, “Free For All”. One thing that immediately noticeable was the return of Derrick St. Holmes to the band! Derrick was the original vocalist on the early Ted Nugent albums including the one who sang the legendary, “Stranglehold”. This was a huge deal for any Ted Nugent fan as it meant the songs would be performed much like they were back in the old days.

The band sounded great (as always) from the get-go and they played another song before doing a slightly extended jam version of “Wango Tango” that featured a lot of soloing from “Uncle Ted”. The four members on stage ran like a well-oiled machine and delivered a rock solid set full of Ted Nugent classics. This time around Ted kept his political views mostly to himself and talked more about rock music and how great he and his band are playing their “soul music”. Occasionally he mentioned about how he likes to tour in the summer only and the rest of the year he gets to kill shit and mentioned his family was in attendance and that he was happy to have them there.  The band proceeded to really deliver the rock and roll goods with songs like “Wang Dang Sweet Poontang” and many others.

At one point Ted went on a lengthy tangent about how “freedom isn’t free” and talked about how he appreciated everyone who fought for our country and gave shout outs to every branch of the armed forces you can think of which segued into “Rawdogs Warhogs”. It wasn’t long after that when the big finale of the main set, “Cat Scratch Fever” followed by “Stranglehold” happened. The two never sounded so good and to have Derrick St. Holmes back and singing “Stranglehold” made the show even more entertaining that usual. After the band left the stage and the crowd asked for more, they came out with Ted donning Indian headgear and played “Great White Buffalo” after which the band put on army helmets and erected a giant American flag and saluted it before leaving the stage for the last time. When it was all said and done Ted Nugent played just shy of two hours and really gave the fans in attendance more than their money’s worth, making a summer tradition one to look forward to again next year.