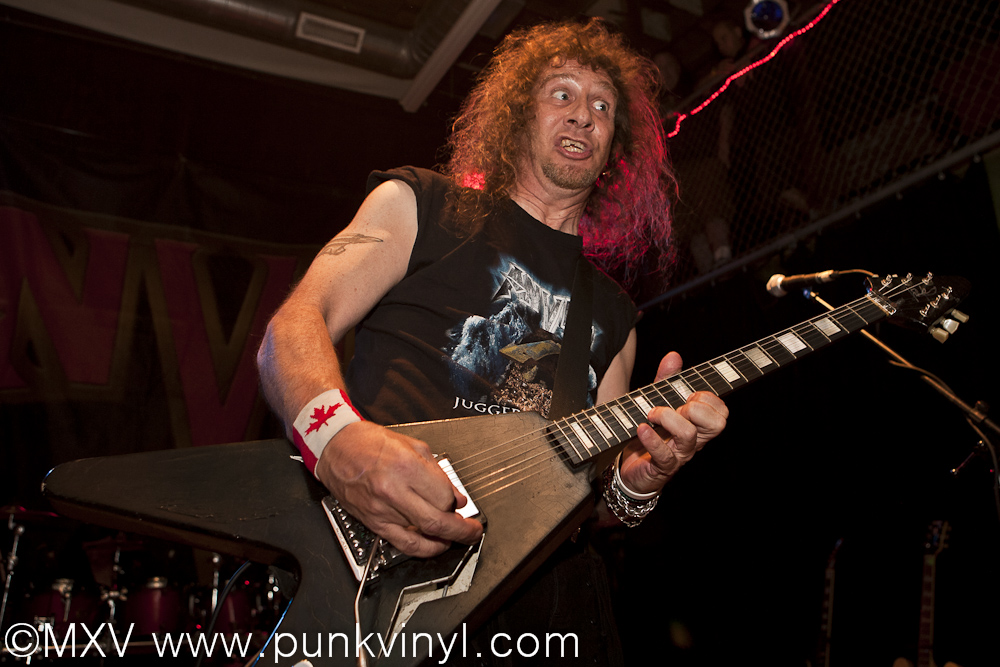 Tuesday night, veteran heavy metal underdogs Anvil made their return to the Windy City to headline a show at Reggies. After enjoying some long-overdue recognition with the release of their documentary a year or so ago, the trio from Canada are back with another new album and tour. The metal-friendly Reggies was a perfect place for them to do a show.

Local act, Wastegate, was the first of many bands this evening. They played standard fare thrash metal that would have been enjoyable had it not been for the singer constantly asking the crowd to either move, start a pit, or bang their heads. He literally did it at least once per song and it was so bush league that it ruined their set. If you are that insecure then you have no business playing on stage. Here’s a tip for that guy: if the people like you, they will react. Thankfully they only played a half an hour but every time that kid would say “let’s see you move, come on” it was like nails on chalkboard.  There should be a law against such things and the rest of the band should be embarrassed.

Crusader quickly followed. They were like a cross between Iron Maiden and viking metal with a hint of a Misfits influence in a couple of songs. It seemed that as the set progressed they got heavier and more viking like or medieval. They were pretty entertaining overall but their set felt just a little long. They were a huge step up from the band who preceded them and are a band worth coming early for if they are on a bill.

A band that has been around nearly as long as Anvil played third and that was Chicago’s own, Enforcer. These guys have been around since 1983 and were a staple of places like the Thirsty Whale. They had an old-school metal sound that was heavy but had melodic tuneful singing. Because there aren’t many bands around anymore with that early 80’s metal sound, they were actually refreshing and unfortunately they played a much shorter set than Crusader. Enforcer should have been given time for a couple more songs as they were really delivering an enjoyable set.

Bible of the Devil were next. These guys had a really great southern 70’s classic rock sound. They were very animated and very energetic in their presentation. Some of their songs were quite fast yet tuneful and they were incredibly entertaining. The crowd loved them too and quite a few in the audience seemed familiar with them. They are definitely a band that is well worth seeking out and hopefully they’ll play around more often.


Bible of the Devil (click any thumbnail to see full images)

Once the stage was cleared off it was time for Anvil. The band came out on stage to a full house of excited fans who started yelling and clapping as the band picked up their instruments. Right before they came out, a couple of ladies passed out wax lips to all the people near the stage to put on when the band came out and nearly all of them did. Lips got a big kick out of that when he looked out in the crowd and saw all these people with goofy red wax lips on. He started noodling around on the guitar and speaking through the pickups and then the band played their instrumental show opener, “March of the Crabs”. The crowd was banging their heads and putting up the devil horns throughout the whole song and the song really got them charged up.

The band continued with some older favorites like “666” and busted out a couple of new tracks as well. A few songs into the set they played another Anvil staple, “Mothra” and Lips pulled out his trusty vibrator to take to the guitar for an extended period of time. The entire time Anvil played he was smiling and so was the Robb the drummer (and the other founding member). The bassist, Glenn, had a serious look to his face the entire time while playing but that seems to be his gimmick as he always looks like that while showing the crowd that he is the master of his chosen instrument. The band sounded really tight and energetic and the crowd picked up on that and responded with tons of cheers and head banging. In between songs, Lips would tell humorous stories about things they’ve done and he was genuinely appreciative of the warm reception the band was receiving. Anvil never became the big successful band they hoped they would but they are a damn good metal band and they proved it on the Reggies stage. They put on an arena caliber metal show in the confines of an intimate club.

Anvil played well over an hour until closing their set with their most popular track, “Metal on Metal” which many in the crowd sang along with. When they left the stage the crowd demanded more and the band came back out and played a three song encore which left the audience completely satisfied when the evening came to a close. It may have been a long night for those that came early and sat through so many opening bands but Anvil made it well worth the wait.