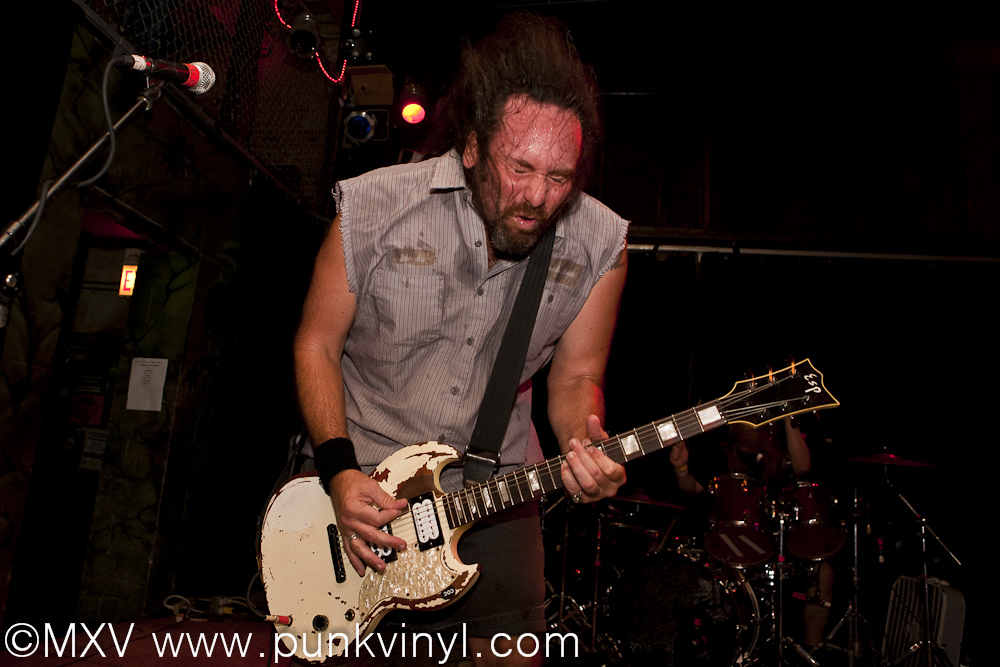 Saturday night over in the South Loop, Reggies had a four band show that featured one legendary punk/metal band from the old days who was touring with one of the finer bands of the modern-day. Those two bands are COC and Coliseum and you couldn’t ask for a more solid pair of bands playing a show together.

Austaras played first. They are a local band that have been around for a couple of years now. They played dark metal with some progressive and melodic parts. Their songs were long and had interesting tempo changes and heavy growling vocals. They seemed a little timid up there on the stage, but they performed admirably.

Hunters played second. Their songs were also a bit lengthier than normal but their songs were very heavy and mostly fast. Their singer screamed, yelled and growled like a mad man and would thrash all over the stage in the small area he had to work with. He faced every direction except for towards the crowd and often times faced the drummer. They were intense and entertaining but someone should have reminded that singer which way the audience was as his stage presence was more akin to band practice than a performance.

A band who has been getting a bit of a buzz surrounding them recently, Coliseum, played third as the room started to fill up with more people. The band has been active for about eight years but it seems that only recently people are starting to catch on. If you have read any praise of this band lately it is well deserved as this evening’s performance certainly proved. The band plays a sort of metallic hardcore (but not thrash) mixed with hard-edged indie rock. They played with such energy and passion that it was infectious. The bass player never stopped smiling their entire set. At one point, their singer/guitar player spoke to the crowd about how he doesn’t say much between songs and then went on to give a really heartfelt speech about how appreciative he and band are for everyone who showed up to the show and how there’s nothing in the world they want more than just to be able to play music. It was totally genuine and rather moving and likely earned the respect of every person in that club. Their performance was totally spot-on and hopefully they will make a lot of return visits to our city as they certainly deserve to be playing for as many people as possible. If you have a chance to see them sometime do not pass up the opportunity.

After Coliseum got their gear off the stage, COC came out to the applause of many eager fans. Their drummer, Reed looked awfully good and happy for someone who was just in the hospital a week ago and it was good to see he recovered and back in good form. The band got started with a slower, heavy dirge that featured low chugging riffs and thick bass line before opening up into something faster. Heads immediately started banging and a little pit formed  near the middle of the floor. The band played a handful of newer songs that were mid-tempo metallic numbers in the trademark COC style with some added sludge and played the song from their most recent single on Southern Lord which sounded even better live.

After playing a bunch of the new material, they busted out some old favorites from the Animosity album and even a couple from Technocracy. The pit once again formed and the crowd really got into it. The old classics sounded super tight and the band was clearly having fun playing them, especially Reed (who did vocal duties on a few of the songs) who only stopped smiling when he had to sing. COC was really ahead of their time over 25 years ago with the sound they had on Animosity and Technocracy and it seems now the rest of the music world has caught on to a sound they helped forge but there’s no denying the fact that COC were metal/punk pioneers and time has been more than kind to them and their material. They put on a clinic of what a good metal/punk performance is and proved that they have staying power. After playing about an hour the exited the stage for a few minutes and then came back out and played “Technocracy” which sounded great. It’s really a treat to have the “real” COC back and it looks like they plan on sticking around which is a good thing!

Check out the rest of the photos from this show here!