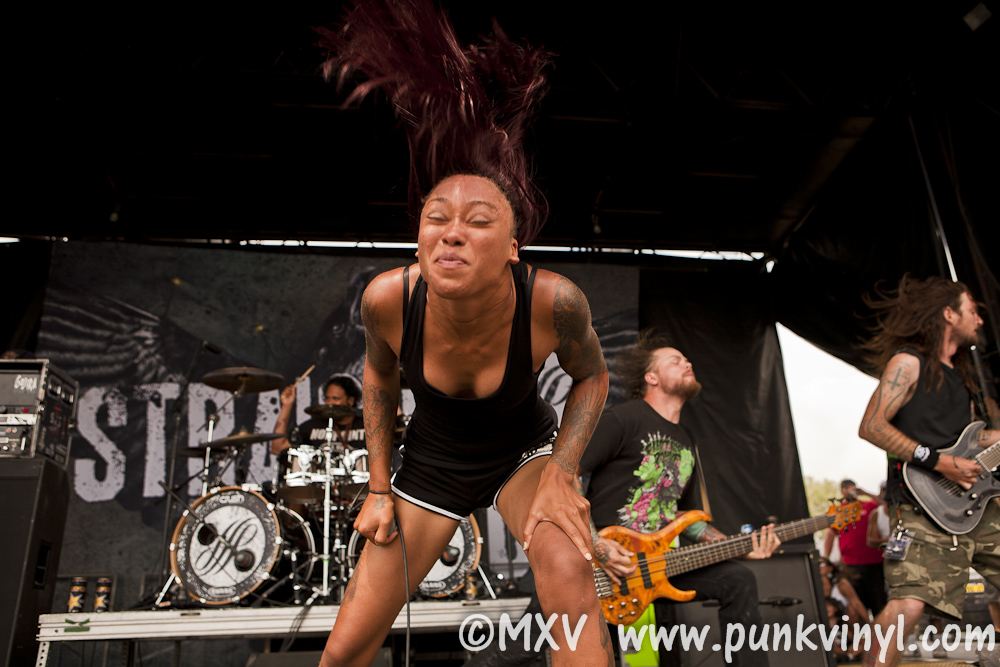 While half the city was packed into Grant Park for some other festival, the real action was taking place a half hour south at the First Midwest Bank Amphitheater in Tinley Park. The action being referred to is that of the annual Rockstar Mayhem Festival. The fest is sort of like a metal version of the Warped Tour but with only three stages and without overlapping performances so it is possible and quite easy to see everyone playing. Thankfully Mother Nature took pity on the area by lowering the temperature a good 15 or so degrees than the weather leading up to the show and you really couldn’t have asked for a better day for the fest. Those who took time off of work to get there right after lunch when the even started were in for a real treat.

Seven Year Existence had the honor of starting the festival off over on the Jagermeister stage. They played speedy death metal with crunchy riffs and fast drumming. The singer had one of those classic mid-range growls that sort of mixes hardcore thrash singing with death metal. While there was still people filing in the venue while the band played, the crowd that was gathering seemed to dig them. They played a pretty short set so those who hung out in the parking lot too long completely missed them.

Straight Line Stitch took the Revolver stage by storm by coming out and jumping right into a blistering set. They played speedy metal with some good tempo changes and some melodic parts. They are like a more metal version of modern metalcore/screamo. Their female lead singer can out growl most guys and was screaming her head off most of the time while flipping her hair all over the place. She was an impressive front-woman and the band were really tight.

One of the highlights of the day was Red Fang being a part of this tour and they were next over at the Jagermeister stage. Their modern-day stoner rock with some modern metal influence was a breath of fresh air on a tour featuring a lot of similar bands and they were hands-down the best band on the two daytime stages. They played a set that should have been twice as long with precision and sounded amazing. Red Fang is a must-see band and if you get a chance to catch them don’t make the mistake of passing it up!

All Shall Perish assaulted the audience with a cross of death metal and grindcore. They had really meaty riffs, lightning fast non-stop drumming, and breakneck speeds. While all this was going down the singer flailed about growling with guttural rumbling vocals that he vomited out of the lower regions of his bowels. It was as menacing as the chunky and heavy riffage being delivered from the band. They were pretty intense to say the least.


All Shall Perish (click any thumbnail for full images)

Kingdom of Sorrow made a repeat appearance this year and was once again a welcome addition. They put on a really energetic set of their brand of metalcore that features Kirk of Down/Crowbar’s trademark crunchy yet soulful guitar riffs with Jamey of Hatebreed’s trademark energetic hardcore vocals. They easily topped last year’s performance and Jamie must have been shotgunning the free Rockstar Energy drinks because that guy never holds still and never gets tired up on that stage. He also never stops smiling in between his bursts of vocals which was infectious as the crowd went nuts for them and was also smiling while doing it. Don’t be surprised if they get invited back to play this festival again next year as they were one of the highlights for sure.


Kingdom of Sorrow (click any thumbnail for full images)

Suicide Silence had some pretty big shoes to fill on the stage next door (the Jagermeister stage if you are keeping score at home). On top of it they were filming their set for a future DVD release. Everyone had these little cameras attached to their instruments as they came out on stage and the singer had one on his microphone. They band played extreme modern metal with blast beat drumming and rapid fire, almost mechanized sounding riffs. The guitarists also broke into really technical leads during the songs too. The singer had a rather high-pitched screeching vocal style that was so aggressive and abrasive that you could almost hear his vocal chords being shredded to pieces every time he shoved the mic into his mouth. They more than filled the big shoes left by Kingdom of Sorrow and delivered the goods to an insane and chaotic crowd of onlookers/moshers.

As the sun was moving well over to the west the festival was only half over. There was still six more bands yet to play which includes the four heavyweights that would take the main stage in the pavilion. Check back tomorrow for the details on the rest of the Rockstar Mayhem Festival.

In the meantime, check out the rest of the photos from the first half here.