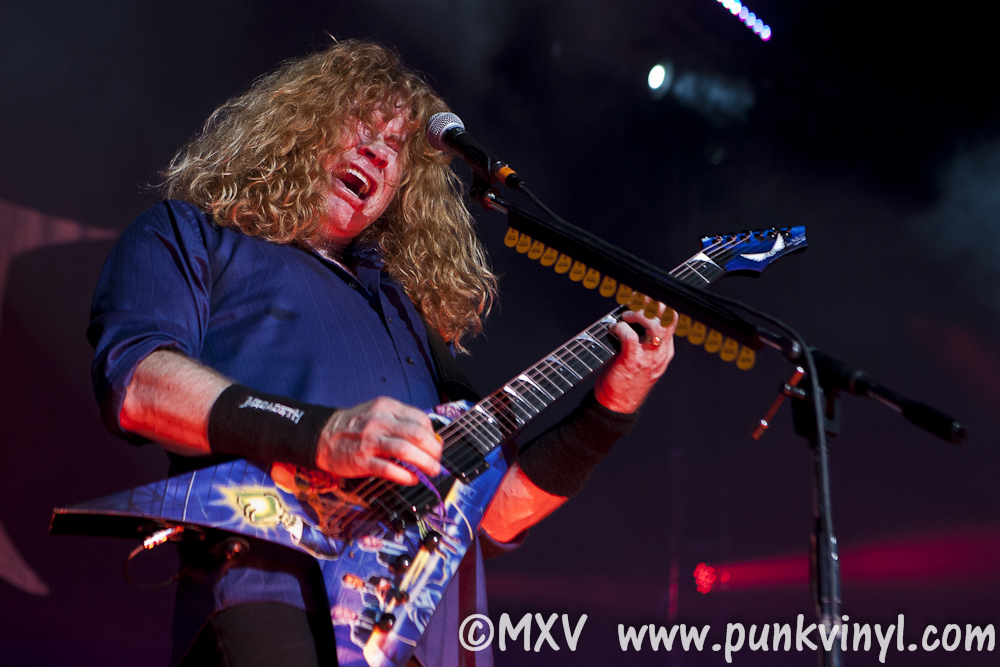 As the day progressed so did the non-stop lineup of bands playing the Rockstar Mayhem Festival and there was only a few more bands to go before the main pavilion opened up for the four main event, big-stage acts. People were sweaty and hot but they stayed hydrated by visiting the Rockstar tent which had a seemingly endless supply of free drinks for patrons which also doubled as a nice place to cool off in the shade. The liquid speed that is their energy drink gave the crowd the much-needed boost to keep them amped up for the entire show without getting tired.

Unearth took the Jagermeister stage to an even bigger crowd than previously seen so far at one stage. The crowd must have really loaded up on those free Rockstar Energy Drinks because they went completely nuts while the band played. The band played really brutal and heavy metalcore. They were fast, hard, and furious and the singer had quite the set of pipes on him and had a really powerful vocal delivery. Their blistering set flew by in seemingly no time at all and it was clear they were one of the crowd favorites for the day.

The Athiarchists stood out for too reasons: they have a name that is difficult to pronounce and they were only a two-piece band. For only two guys however they had a huge sound and they ended up standing out from a lot of the pack because of it. They played a metallic thrash/hardcore that was a bit more traditional and abrasive than some of the other acts they shared a stage with and had a really impressive sound for such a minimalist setup.

Hatebreed was the last band to play the outdoor early stages and you’d have been hard pressed to believe their singer already performed an energetic full set earlier with Kingdom of Sorrow. There was a humongous crowd of rabid fans packed in to see them and they damn near tore the barricade down with all their crazy antics. At one point Jamey hopped down and stood on the barricade steps to sing with the crowd and they were mauling each other trying to get near him to get their voices heard. The band was super tight and played with a lot of passion that the crowd leached off of to go even crazier. They probably could have held their own on the big main stage based on the fan reaction to their performance.

Once Hatebreed finished it was time for the main stage to open up and Machine Head were the first to go on over there. The band has been around nearly two decades now and have gathered quite a following over the years. Their influences ranged from thrash and nu metal to some more prog rock stuff like Rush and it made for an interesting set. Their set was a little on the short side but they made good use of the time they had by playing admirably and likely won over a new group of fans by the end of their set.

Megadeth quickly followed and the pavilion had filled up nicely by this point and people were chanting for them as their crew was finishing up the sound check. The band came out and played “Sweating Bullets” and their incredible, “Wake Up Dead” in the span of a couple of songs of each other and the crowd was eating up their set like candy. They played what for lack of a better description was “Megadeth’s greatest hits” which ended with “Peace Sells” before they ended up coming out for an unexpected two song encore. They were without a doubt the best band on the entire festival and it really was a crime that they were playing before both Godsmack and Disturbed but they set the bar so high they clinched the title of best band on this year’s Mayhem Fest.

Godsmack had the unfortunate task of trying to follow Megadeth’s metal clinic and while they put on a strong performance of their own, it just felt a little lack luster because of how great Megadeth were. If you were a Godsmack fan however their set was nothing to scoff at as they put on a good showing, it was just that they were totally eclipsed by what preceded them.

Home town heroes (to some), Disturbed, closed the evening with a big stage set that included a ton of flashing lights, some video backdrops and even pyro. They seemed a bit laid back while performing and it was often times slower and more melodic than most of the bands who played all day long. The singer’s voice sounded really good and the band’s playing was tight but again they had awfully big shoes to fill. Their opening segment with the video and cool lighting was pretty impressive and gave the show a really big feeling. They put on a lengthy set that covered pretty much anything a Disturbed fan would want to hear and then some and was a good ending to a really good Mayhem Festival that left the crowd hopeful for it to return again next year and anyone who chose this over Lollapalooza clearly made the right choice and really got their money’s worth.

For the rest of the pictures from this show click here.