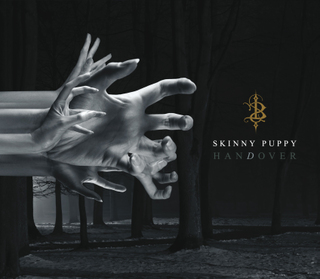 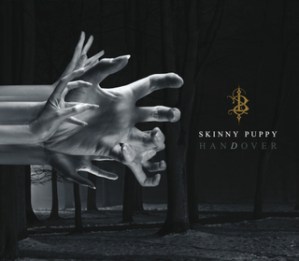 My favorite band in the entire world, Skinny Puppy, announced that their long-awaited new album will be released in October on SPV/Synthetic Symphony Records in North America. The album is titled hanDover and it is the band’s 14th studio album. The band is one of those rare acts that not only has never put out a bad record but also came back after being broken up for a decade (and having a key member pass away) and continued to cement their legacy of greatness.

In true Skinny Puppy fashion, this album didn’t come without its share of hurdles including their label nearly going out of business a couple of years ago. hanDover centers not only on the unbridled greed of the world’s financial organizations and the governments that enable them, but the climate of political impotence which makes people resign their fate, no matter how insidious the situation gets.

“It’s definitely the overarching feel of ‘bend over and take it,'” offers Ogre, only half-kidding about the album’s theme. “I recently listened to the record and it’s making even more sense to me. We’re certainly experiencing the rape of mankind as the world’s economies slide even further and the inability of people to look around them and see what’s going on. You’re starting to see a neo-feudalistic empire on the rise. People are getting so pissed off, they’re turning on each other.”

“I didn’t want to write the record the same way as the previous ones,” says Cevin Key about his m.o. on the first new Skinny Puppy music since 2008’s Mythmaker. “I wanted there to be fresh angles, both in the songwriting and the programming platforms. I was changing the whole element of myself just to see what would happen. In the end, I made something different, but it was still coming from me. I’m not interested in looking at my accomplishments and myself. Like any electronic music fan, I look at the big question: Where is it all going?”

Production duties are once again being handled by Ken “Hiwatt” Marshall and Mark Walk both of whom have been working with Skinny Puppy since the two founding members, Cevin Key and Nivek Ogre reformed the band in 2004. hanDover will be released on October 25th.