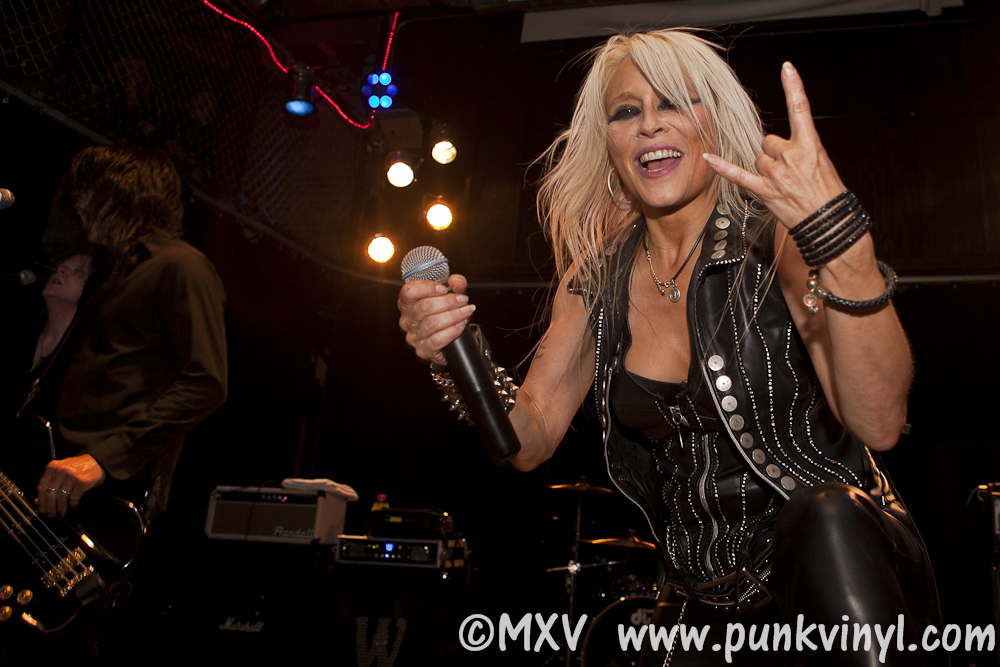 Sunday night not only marked the tenth anniversary of one of the most tragic days in American history but it also marked the return of a metal legend to Reggies. That legend is the “queen of metal”, Doro Pesch. Doro has enjoyed a long career in music spanning the better part of three decades now, first with Warlock and then as a solo artist after that band fell apart. Doro was only doing a couple of shows in the United States and Chicago was lucky enough to be one of the spots for her rare appearance. A bunch of long-time metal fans ventured over to the club and lined up early waiting for a chance to meet Doro and get some autographs before the show, after which the show got underway.

Earthen Grave took the stage first and got the crowd warmed up. They played a mostly melodic style of heavy metal but incorporated numerous tempo changes, fast parts and doom parts. Their singer had a good bellowing vocal style that when coupled with some reverb worked really well with their style of music. His wearing a Bears jersey on stage during their set wasn’t very metal however and points were lost for that infraction, but that aside they delivered 45 minutes of entertainment.

After the changing of the gear and some chanting from the crowd, Doro’s band of talented musicians flanked the stage and when the opening chords of “Earthshaker Rock” started she quickly followed. The first thing that was apparent that time has been extremely kind to Doro, she looked great. She was also full of energy and she stalked around the stage flipping her hair and delivering a flawless vocal delivery. She spent a great deal of the show standing as close to the front of the stage as she could singing right in people’s faces, being near the crowd and allowing them to sing along to the choruses with her, and sing along they did! While the club was only about half full or so, they all packed in as tight as they could near the front of the stage in an attempt to be as close to Doro as possible. Heads were banging and fists were pumping non-stop for the full duration of every song.

Doro talked to the crowd a lot between each songs in her thick German accent that at times made her sound like the female Terminator. She talked a lot about how happy she was to still be playing shows for her fans and told stories about touring with Dio (which segued into her playing a Dio cover) and playing big metal festivals overseas. She would also talk about what the next song was and which record it was from. The band played a ton of songs that spanned her entire career. total running time was easily 90 minutes with the main set ending with “All We Are” which had the entire audience singing along with to the chorus. They even threw in a drum solo during their set for good measure. When the smoke cleared and the band left the stage, all the fans were sweaty, tired, and extremely pleased with the flawless performance Doro put on which was a great retrospective to her entire career. Doro fans couldn’t have asked for a better show and Reggies once again knocked one out of the park with another special event.