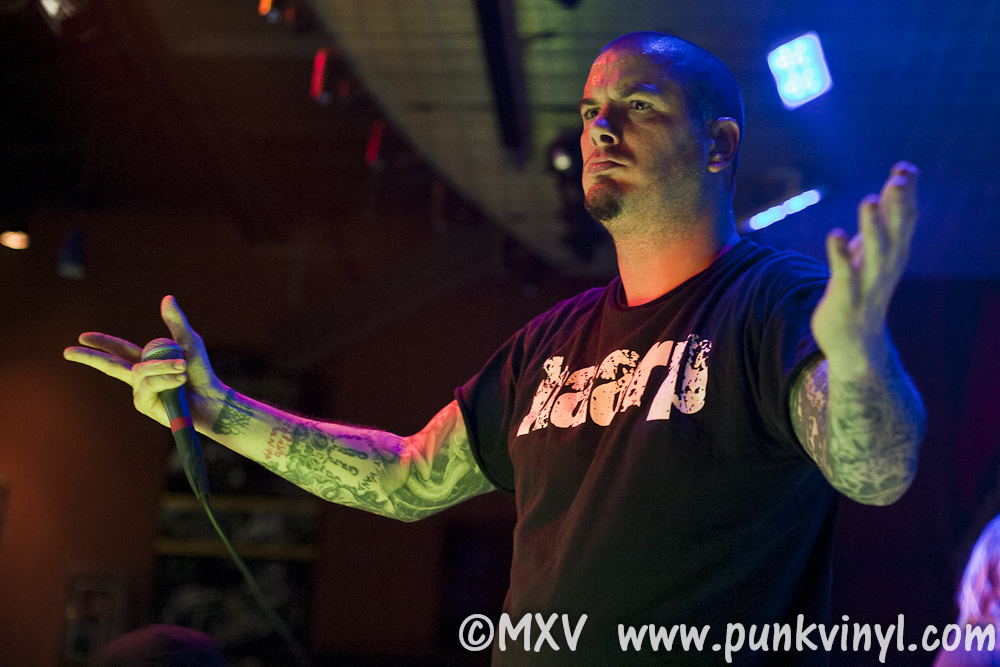 After a two-year wait since their last trip to the midwest, metal superstars Down returned to IL and instead of playing Chicago opted once again to play in Libertyville at Austin’s Fuel Room. Hundreds of fans packed the restaurant portion of the venue waiting the extra hour delay for the doors to open and in doing so got themselves good and wasted before the venue doors even opened.

Well over an hour later than the advertised start time, Pony Killer finally took the stage to begin the night’s entertainment. They announced they have a record coming out that will be produced by Phil Anselmo (singer of Down) which must have been an attempt to win over the crowd. They seemed like they were a band unable to decide what their influences or direction were. Sometimes they were heavy, often times they were psychedelic, sometimes they were experimental, and sometimes they were an indie rock band. All of this conflict occurred during every song. There would be small portions of songs that would sound really good and then suddenly they would go off in a completely different direction. The results were too haphazard most of the time. At times they showed real promise, but those times weren’t often enough unfortunately.

In Solitude soon followed. These guys hailed from Sweden and their singer came out wearing some sort of raccoon on his head like he was Davy Crockett. They played some really great and rockin’ metal and their songs were powerful yet catchy and the vocals just a hint on the melodic side. They packed quite a punch and their songs were a bit longer than average with cool changes and lots of crunchy riffs and cool guitar noodling. They really put on a great show and won over a good portion of the crowd by the half way point of their set.

After a huge delay while the crew and staff fumbled with monitors trying to get the stage ready for down, they took the stage after almost an hour wait. The crowd was totally wasted and impatient and they all started pushing forward and yelling for Down to start. It was clear the flimsy barricade would be about as effective as if they had just put up movie theater ropes and it was already bending and failing under the weight of the crowd. The security staff scrambled to try to move more equipment crates in between this flimsy rail and the stage but it was to no avail as the thing was already at a 45 degree angle and the entire staff sat against the stage with their legs out trying to keep the thing up the entire night. The crowd was close to rioting as well.

When Down finally walked out and picked up their instruments, the crowd surged forward again and it was pretty clear that it was going to be a crazy show and possibly a dangerous one. The band started off with “Eyes of the South” and the crowd went completely nuts. Everyone in the front was being smashed but that didn’t stop the fist pumping and head banging and singing along. The band sounded great and Pepper, Phil and Kirk spent a great deal of time playing right at the front edge of the stage which was now only a few inches from the crowd since the barricade wasn’t doing much good. There was no calming down the crowd and at one point an injured guy got pulled out of the crowd and helped outside. Part way through the second song, “N.O.D.” the band stopped playing in order for Phil to instruct the crowd to pick up the people who had fallen and to ask them all to take care of each other. Once it appeared everyone out there in the sea of chaos was alright the band resumed the song and the rest of the show went off without any major incident. The band played a set list almost identical to the one they played in the same venue two years ago and that was more than fine with everyone in the crowd who continued to go insane while still guzzling adult beverages.

The band fed off this chaotic energy and seemed to be enjoying the spectacle as they delivered a great selection of material spanning all three of their albums and all of them sounded great. The crowd sang along to every chorus too. In between songs Phil talked a lot about various things and took surveillance of the crowd to make sure no one was dying out there. It had to be one of the rowdiest shows the band ever played and the whole thing was more akin to an old hardcore punk show with how crazy it was than it was a big metal/rock show. When the band finished playing about an hour had passed and they ended the evening with their show closing trademark, “Bury Me in Smoke” where at the end it became an extended jam with guest musicians taking the place of the Down members as they stood and watched and shook hands with the crowd. One of the guests who just so happened to be in attendance was Charlie from Anthrax! The little jam went on for about five or ten extra minutes and then it was time to call it a night as the band thanked everyone and left the stage which finally gave the security staff a chance to breathe.’