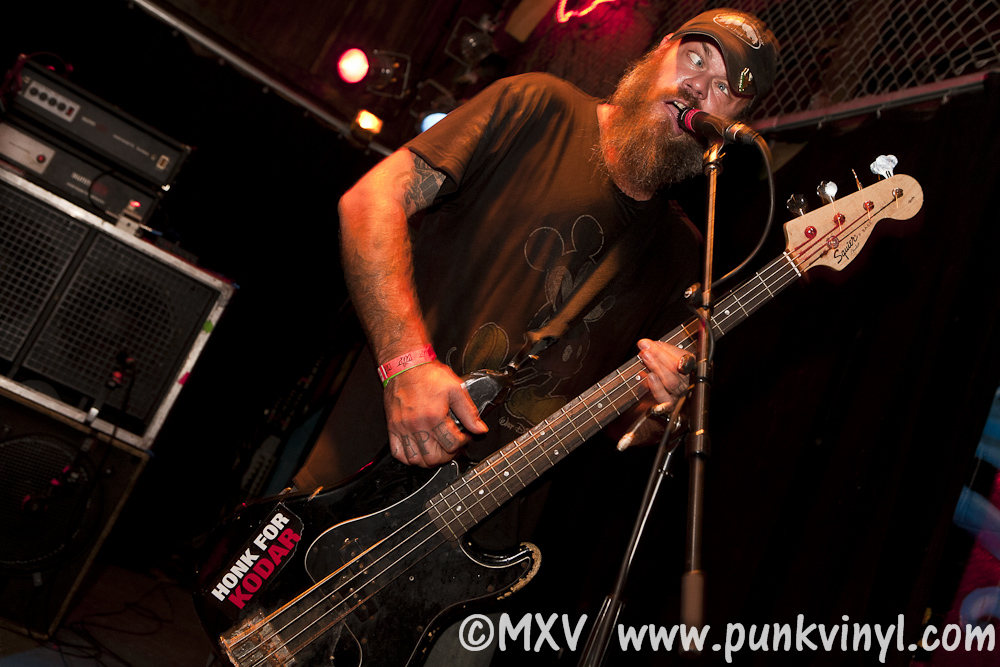 Saturday night a touring package of four excellent heavy bands made a stop at Reggies in Chicago for a night of metal in the South Loop. This package tour featured the mighty Weedeater as the headliner and that alone was reason enough to hit up one of Chicago’s finest clubs and the fact that three other good bands shared the bill was just icing on the cake.

First up was Fight Amp. These guys had really loud guitars that at times were reminiscent of Shorty with their oddball sound. They were really loud and noisy in a way that the earlier bands on Amphetamine Reptile were. They had a lot of power, aggressive vocals of the yelling variety and great riffs. In fact had this band been around 20 years ago they’d have likely been on the AmRep label and been one of the many highlights of shows at Lounge Ax. They were super impressive.

Bison B.C. (from Canada) were up next. They were way more on the metallic end of the spectrum and played longer and more complex songs. They had two singers, one who had a great sound and one that had almost comical cookie monster over the top growls. Their songs were super heavy and they were just this big behemoth of pummeling sound that was equally impressive in its own way.

Hailing from California, Saviours made their return to Reggies after not being back here for a couple of  years. They were a faster band than Bison B.C. and had a more retro stoner rock vibe to their songs. They played fast heavy riffs that were really catchy and had a more hard melodic delivery to their songs than any of the other bands sharing the stage with them that night. They have been around for quite a few years now and have only gotten better in that time and they played a handful of new songs that were among the best songs they’ve ever written (and they’ve written a lot of good songs)!  The crowd was really into these guys too and if you looked across the crowd you would have seen a lot of banging heads and excited patrons.

The club was already full before Weedeater took the stage and those that may have been hiding outside smoking or at the bar next door packed into the club just in time to see the band open with one of their best songs, “God Luck and Good Speed’. This came after the band walked onstage to the theme from Sanford and Sun and Dixie started twirling a bottle of Jim Bean before swigging it. The band’s sound was thicker than ever and their trademark sludge metal was in top form this evening. Luckily the band didn’t injure themselves before coming to town (something they’ve been known to do, thus having to cancel many shows) and they all seemed to be in fine form with all appendages intact. From there they played some songs from their latest album, Jason the Dragon as well as stuff from God Luck and Good Speed. Every song sounded so heavy and Dixie’s distinct raspy blown out vocals sounded strong. He was bouncing all over the place and spitting while playing and it is amazing he doesn’t ever miss a note while moving around so much.

Weedeater’s drummer is a massive powerhouse with his pummeling of the drums and they sounded great. His kit is set up in the front of the stage in between the other two members so everyone’s on an equal plane and close to each other. They play like they all share the same brain giving them commands which results in such a tight and flawless delivery. The crowd even formed a pit during one of their faster songs which was unusual but it was a result of Weedeater being so good that they just couldn’t help themselves. They played for an hour and it seemed to fly by in just minutes as the band was so good that there was no being distracted by things like talking or looking at a clock. They put on a sludge metal clinic and are one of the most unique metal bands around these days and was a perfect end to a stellar show from start to finish.