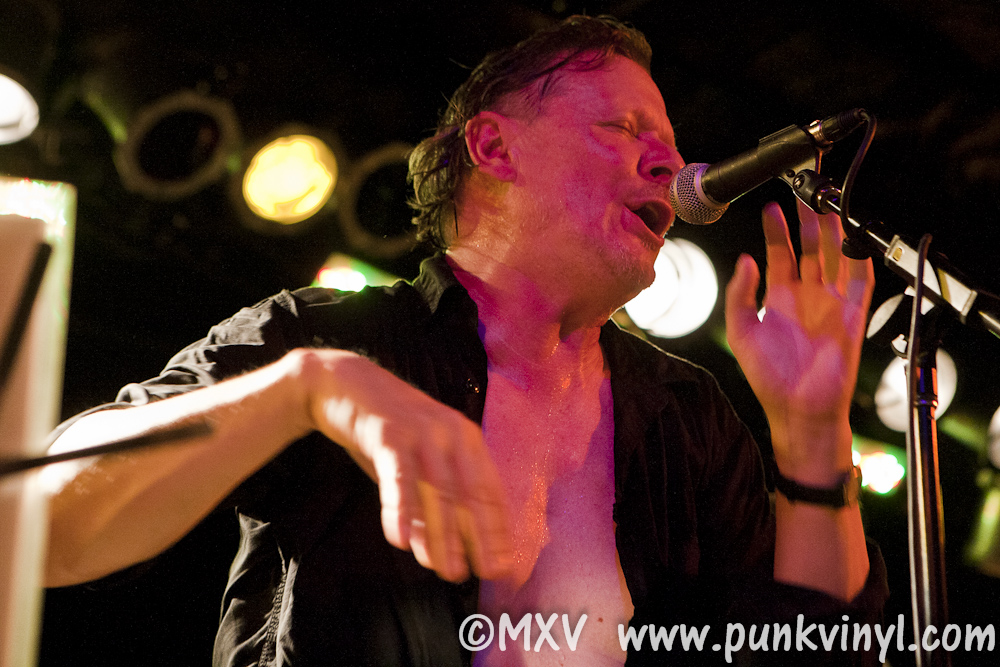 Thursday night the Swans once again returned to the Bottom Lounge in an effort to destroy the hearing of about 700 or so people with their insanely loud and intense performance. Until last year the band was mostly inactive and when they come to town it is a special event that should be treated like a holiday.

As people were still arriving, Daniel Knox and his band took the stage. He played some low-key and mellow songs that were easy on the ears and easy listening. He played a keyboard while one other guy played drums with those brush sticks and another played the musical saw. It was very out of the ordinary and a fun listen.

A few minutes later Sir Richard Bishop took the stage. He was a one man act with a guitar and played instrumental songs. He wailed away on that guitar in an almost acoustic fashion. It sounded a lot like music you’d hear in a Quentin Tarrintino movie or some sort of western with a lot of gun fighting. In the middle of his set he put the guitar down to do a spoken word skit type piece that was rather humorous and twisted then he sat back down and picked the guitar back up to continue the wailing. He got a big round of applause when he was finished by the now-full room.

It didn’t take long for the crew to clear the stage and then suddenly a droning noise started emanating from one of the amps that went on for about ten minutes before Phil Puelo and Thor Harris took the stage to play chimes and drums for about another ten minutes. This led to the rest of the band filling out  the stage to start “No Words/No Thoughts” and when the band kicked in it was one of the loudest things the Bottom Lounge has ever held, rivaling that of even last year’s Swans performance. They extended the song immensely compared to the album version and when the band played, it was one of the most intense spectacles ever. The way the band works extended drone passages into abusive and loud pummeling is something that no other band has ever come close to matching and the Swans live are a sonic powerhouse in a league of their own.

Band members mixed traditional bass and guitars with drums, chimes, steel guitar, cymbals, a gong and various other uncommon sound making devices that complimented the punishing and loud songs perfectly. It wasn’t all in your face though, they have plenty of softer passages as well and really are masters of mixing the beautiful with the ugly and the contrast makes the band that much more intense. Michael Gira is one of the strongest and most intimidating front men in all of music and his very essence commands attention on that stage as he directed his amazingly talented group of musicians to sonically destroy the entire audience.

The band played for close to two and a half hours that was divided into only eight songs, ending the night with “Eden Prison”. Each song was stretched out to close to 15 minutes in length each yet not a single one felt like it was artificially lengthened. They simply reworked all their songs into these longer and much more intense musical chapters of the show. They concentrated heavily on the newest material and even debuted two brand new songs that will presumably be on their next album and if these songs are any indication of the direction they are headed with it, it is going to be a good one! When the band was finished it was a safe bet to assume nearly everyone in the club suffered hearing damage, including those wearing earplugs as it was that loud and that intense and once again the Swans put on what was likely to be the best show of the year in Chicago.