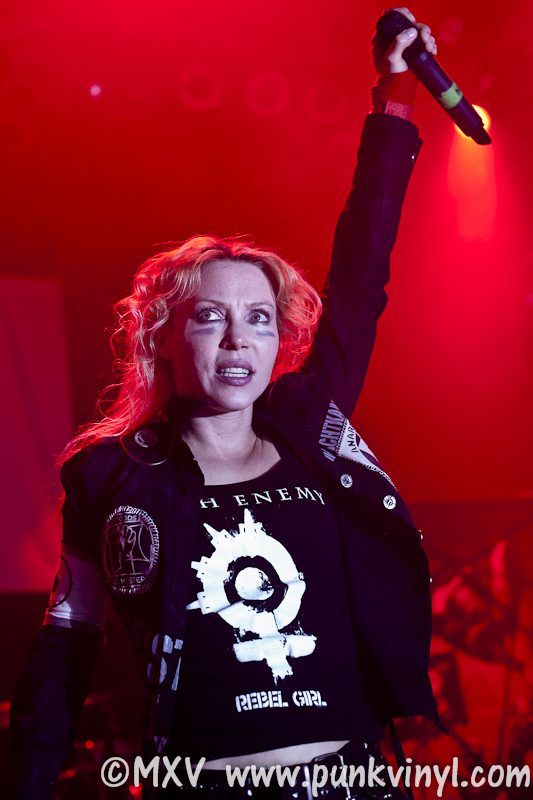 Last night the House of Blues hosted an early show featuring four metal bands that were touring together with the headliner being Arch Enemy. The band has a lot of fans in Chicago and they brought a pretty attractive package of opening acts with them. The show got off to a super early start at 5:30pm which meant most people were rushing to get there after being let out of work or school.

Hailing from Taiwan, Chthonic took the stage bright and early. These guys mixed black metal elements with traditional Asian music elements that made for a very cool blend of styles that still resulted in super powerful and heavy music. They were super tight and the singer talked a lot between songs. Their 30 minute set flew by and was over way too soon for many in attendance.

The mighty Skeletonwitch quickly followed. They never fail to melt the faces of the audience and this time was no exception. They played a mix of material from most of their albums including some from their forthcoming one which sounded great. The band is among the cream of the crop of modern extreme metal and are a must see act. They should have been playing third instead of second as they were the best of all the opening bands without question.

Devil Driver took a bit longer to set up their gear but they got going soon enough. Their playing was solid enough and the crowd contained a great deal of fans but the singer’s constant pleading with the crowd to form a pit or move around came off as amateurish and irritating, especially for a band playing right before the headlining act. They should have been the opening act and Skeletonwitch should have been in their place.

Arch Enemy came out on stage while images flashed on a movie screen above the rear of the stage. The stage filled up with smoke and flashing lights and the band thrashed away from the word “go”. The crowd went nuts and plenty of bodies were flying over the barricade into the busy hands of the security staff. The band’s technical savvy death metal sounded like it was being performed by a well oiled machine and all the touring has only made the band that much tighter. Angela’s vocals sounded as heavy and intense as ever and she stalked around the stage flipping her hair around as she growled like a banshee.

The band delivered song after song from most of their modern albums and the crowd couldn’t get enough of it. They never stopped going off during every song and the band fed off that energy and turned up the awesomeness an extra couple of notches. This was the last stop of their tour and there was no sign of fatigue at all, in fact all the time on the road just made them that much of a better live act. After over an hour the band left the stage and left a full house drained of sweat and content that their ticket money was well spent.