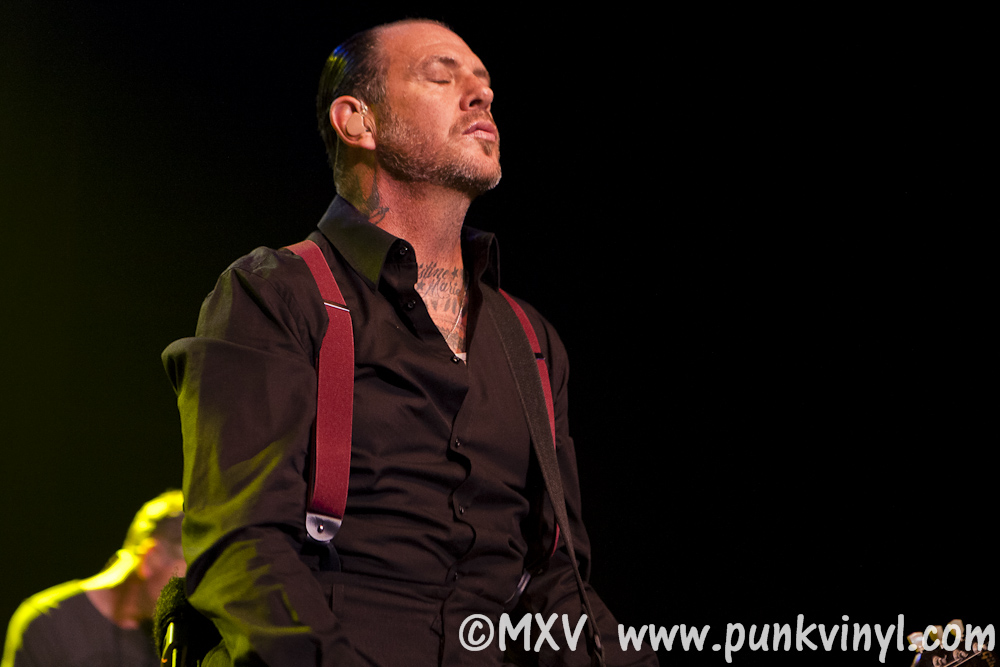 Riot Fest continued last night and kicked into high gear giving people a choice between going to Congress Theater and Bottom Lounge. They even had a shuttle bus going between the two venues at one point for people who wanted to head over to catch the other show. The show at the Congress Theater featured three bands with another band celebrating three decades together, Social Distortion.

First up was Reverend Peyton’s Big Damn Band. They were something straight out of Hee-Haw. There was a drummer, a guitarist/singer and a woman who played a washboard and symbol. The only thing they were missing was someone playing a jug! They had southern twanged back porch music that was upbeat and surprisingly entertaining. They played for about a half hour and at the end they set the washboard on fire for a few seconds. They would be a perfect band to listen to the next time you make a batch of moonshine in your bathtub.

The Tossers quickly followed and their large band are Congress Theater familiars. They played Irish drinking songs in the vein of The Pogues. The band played a variety of instruments including some sort of flute and a violin on top of their usual array of acoustic and electric guitars. The crowd showed their appreciation by drinking heavily and some of them even sang along to the songs they knew. They played for close to an hour.

The Congress was packed full to the rafters by the time Social Distortion walked out on stage to begin their set. The band started off with some instrumental intro and then played “Bad Luck” which was a strong start and got the crowd excited. A couple of songs later and they busted out another mega Social D hit, “Story of My Life” and the crowd surfing was at a frenzy by this point. It got even crazier when the band went old-school and played “Mommy’s Little Monster” and the legendary “1945” back to back! The latter sounded so good it justified every person’s price of admission alone. They played some songs from their newest album and threw in plenty of older favorites (though nothing else from Mommy’s Little Monster) including a slower rendition of “Prison Bound” which gave new life to a classic tune.

The band played like the well oiled machine that they are for close to 90 minutes and never held back during any song. They delivered the goods for the entire length of their set and the crowd delivered bodies over the barricade from all the ridiculous crowd surfing that was taking place. They totally outdid their last visit here a year ago despite the smaller amount of early tracks but the band has such a strong catalog of songs that the stuff that followed that first album was equally good and satisfying to hear live. It was a great second night of this year’s Riot Fest for sure.