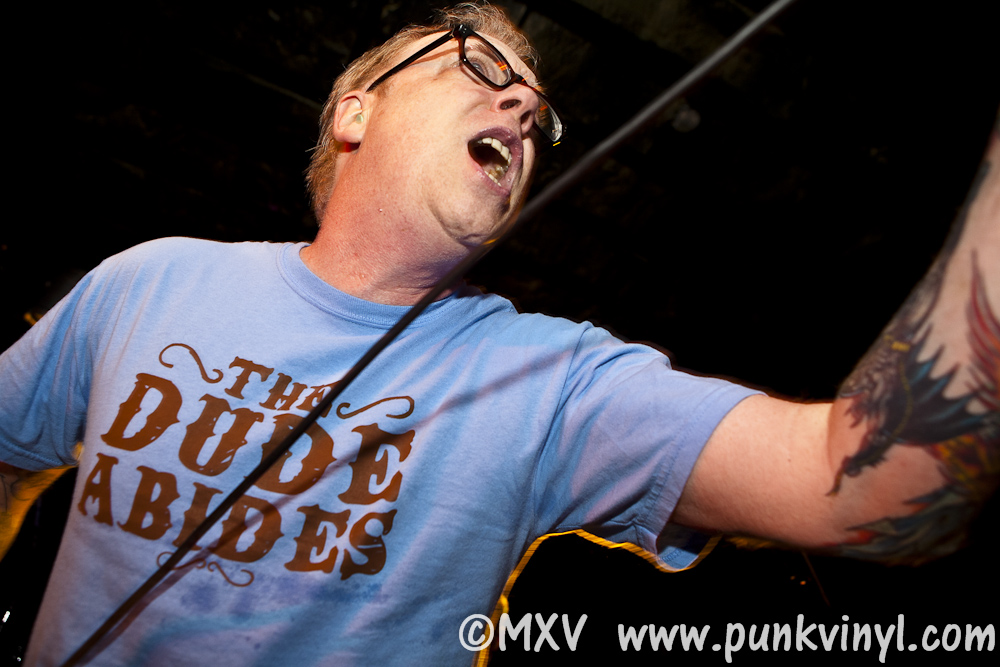 As Riot Fest continued during the week, the shows were starting to split up between venues which sometimes made fans have to choose which show to see but this year it was a little friendlier and due to some later start times it was possible to catch multiple/partial shows on the same evenings. On Thursday after Social Distortion finished over at the Congress Theater, there was still plenty of time to make it to the Bottom Lounge to catch the first night of two All performances.

Before All took the stage The Pavers put on a 45 minute set of hard-edged punk/indie rock type songs. This band featured Scott Reynolds of All fame on vocals and they had a bit of a similar sound. Their songs were very punchy yet had a melodic edge to them. They were a really tight and solid band and had a good light-hearted feel to them which made for good times.

For the first night of their two night stand, All had Chad Price performing the vocal duties. Chad was best known as the third singer of the band and played on all of their most recent records. While All may not have been very active in the past decade, you’d never know it by their performance Thursday night. The band played like they had never stopped performing together so either they practiced their asses off in preparation for these shows or they are just so good playing together that they naturally just play perfectly. Whichever it is the end result was a set that lasted well over and hour with hardly any stopping between songs and a virtual greatest hits of the band. The crowd packed the club full and sang and danced along to the half million songs the band played for them. It was really impressive how good these guys are as a live act and it was as if these guys were born to play music together and share the same musical brain that controls them all and keeps them always in sync with one another. Getting All to play at Riot Fest again was a great coup for Riot Fest, but getting them to do it with all three singers was the icing on the cake. Now they need to just do the same thing with Dag Nasty!

Riot Fest day two ended up a very high note and in less than 24 hours All would be taking the stage one more time.

On Friday night while some uptight prima-donna who won’t let anyone take his photo (or that of the opening bands) was playing at the Congress Theater, All was gearing up for their second night at the Bottom Lounge and this time they would feature their other two vocalists.

First up was The Holy Mess. These guys didn’t have a set list made up for the show and just winged it. They talked a lot between songs and were quite entertaining with their between-song banter. Musically they were punk/hardcore with a slight melodic edge. They had a few really catchy songs and their last couple of songs were especially great. What a nice way to kick off a Friday night! They played a 30 minute set.

Next up was Chinese Telephones. They played a harder-edged Screeching Weasel inspired melodic punk rock. They had a slight garage influence as well and they also had multiple singers who took turns depending on what song they were playing. Their songs were quite catchy and their 30 minute set went by really quickly and it’s a safe bet they won themselves a room full of fans after they were done playing.

Down By Law was the third band of the evening. It had been quite some time since they played around here and their activity in the past many years has been pretty much nonexistent so it was a real treat that they were brought together again for this show. They played a variety of songs from their entire career and it sounded way better than their actual records did (and those weren’t bad records by any stretch of the imagination). Their energetic mid-tempo punk songs sounded timeless and the crowd was full at this point and were way into them. People started bouncing about and dancing and singing along. Dave Smalley is still one of the best front-men in punk rock and he was in top form this evening (while also playing guitar). He spoke a lot between songs about a variety of topics but most of it was trying to inspire positive thought and spout the merits of the punk rock scene and unity. It was nice to see he has held true to his beliefs over the years and still comes across as one of the good guys. They really stole the show and put on a headliner caliber set that could have, and should have been longer.

Somehow more people squeezed in (and packed themselves in every square inch of the front part of the club) before All took the stage to a big round of applause. Before they went on many die-hard All fans in the crowd could be heard sharing stories of All shows past and debating favorite singers and All records. It was impressive how many hardcore All fans there were in the audience and the excitement level was high as Bill Stevenson sat down at his drum kit and started the first notes of the night.

The band All started with Dave Smalley as their vocalist and it only made sense that they started their set the same way. They played some early songs and the crowd went nuts for them. People were pushing forward and crushing those in front of them (a truly asinine practice) as they were pumping fists and singing along. It was a special treat to have the original All lineup play again if only for a few songs and they sounded great. The only downside was they only did four songs with Dave before he left the stage to tag in the next singer.

In the most hilarious event of the entire Riot Fest, Scott Reynolds came out on stage dressed like Danzig including a black wig and a similar outfit to what the princess wears on stage. He poked fun and sang a few bars of a Danzig song before being kicked off the stage by Bill Stevenson. The band played an instrumental number and then Scott came back on stage dressed in his normal clothes and the band played way over an hour more of additional All material that the crowd went equally nuts for. Just like the night before, the band played flawlessly and showed no sign of having aged or any fatigue. Every All fan in attendance got more than their money’s worth out of the tight and fun performance the band put on which ended their two night stint on the highest note possible (and quite late!). And the band wasn’t done with Riot Fest yet as the next day the three musicians would be joining up with Milo to headline a show as the Descendents!