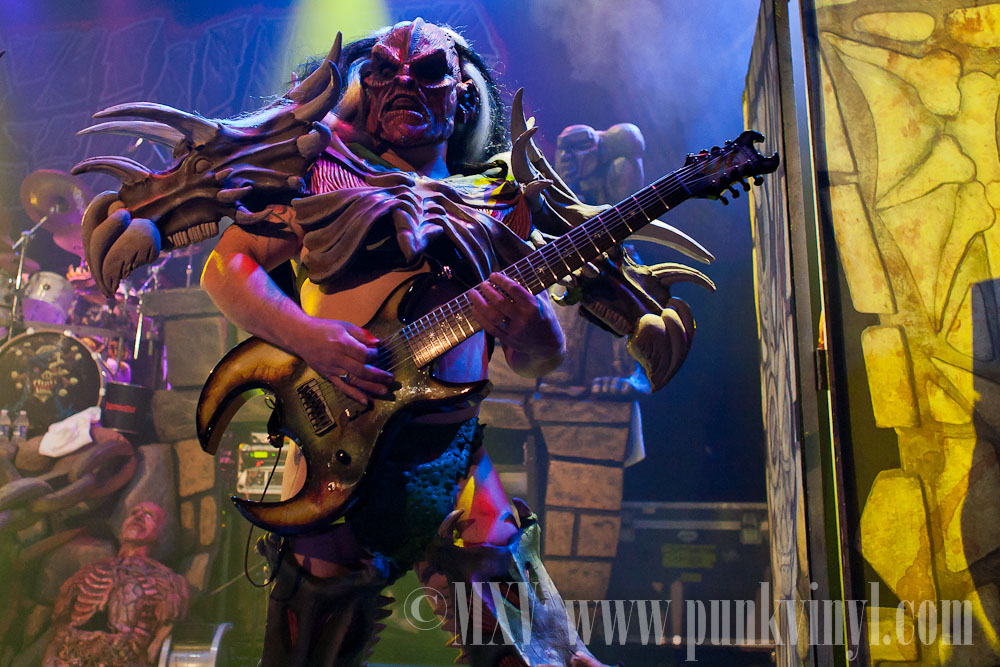 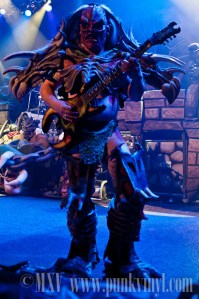 Gwar singer/leader Oderus Urungus (real name Dave Brockie) issued a statement about the tragic and sudden passing of his friend and band mate Cory Smoot. Cory was the man behind the mask of lead guitarist Flattus Maximus, a role he has played for the better part of the last decade. Sadly this story isn’t a story in the Gwar lore, it is unfortunately very real. Brockie’s statement is as follows:

After a restless night spent hurtling through the desolate Canadian wilderness, I crawled from my bunk on the tour bus to face reality, grudgingly aware that the dark dream that gripped us would not fade with the day. We have lost a brother, a husband, a son, and one of the most talented musicians that ever slung an ax. Cory Smoot, longtime lead guitar player for the band GWAR, has passed at the age of 34.

As the singer of GWAR and one of his best friends, I feel it is my duty to try to answer some of the questions that surround his tragic and untimely death. I know the sense of loss and pain is far greater in scope than in the insulated environment of a band on tour, and I will do my best to provide what clarity and comfort I can.

The most glaring question is how? And unfortunately that is the hardest question to answer. The truth will not be known until the medical officials have finished their work. All I can do is relate what we saw with our own eyes.

The last time I saw Cory was after our show in Minneapolis on Weds. night. It was a great show at First Avenue in Minneapolis, one of our favorite places to play. Cory was happy. He was excited about the band and especially the new studio he was building in the Slave Pit back in Richmond. He was deeply in love with his wife, Jamie, and was busily planning their family and future in the beautiful home they had. As usual, after some autographs and banter, I was probably the first person in their bunk as we got ready for a big drive into Canada, and Cory and the rest of the guys were not far behind. As I fell into the slumber that only playing GWAR shows can induce, everything seemed right in the world.

We found Cory the next morning as we collected passports for a border crossing. He was in his bunk, unresponsive, and it quickly was clear that he was dead. It was without a doubt the most horrible moment of my life. That’s all I can say about it.

Within moments everybody was off the bus, standing in a wind-swept parking lot in the middle of nowhere, trying to come to grips with the shock of it. First the ambulance arrived, and then the police, but there was nothing that could be done other than fully investigate the scene and remove Cory with care and respect.

We are completely devastated and shocked beyond belief. One night we had our friend and colleague, happy and healthy in the middle of our best tour in years and the next morning, so suddenly, he was gone. Never have I seen starker proof of the fragility of life.

Cory will be transported home to Richmond over the next few days, and an announcement regarding services will be made soon. We ask everyone to respect the families wish for privacy, and especially to keep his wife, Jamie, in your thoughts and prayers.

As we work our way through these difficult days the question is — what will GWAR do? After a lot of consideration, we have decided to carry on with the tour. Although the great temptation would be to return home, curl into a fetal position, and mourn, we can’t do that. First off, Cory wouldn’t want that. He would want us to go on and would be pissed if we didn’t. Plus we know the fans don’t want us to quit. They are going to want a chance to come to grips with their loss, and there is no better place to do that than at a GWAR show. Though it’s hard to believe, I think we all would feel a lot worse if we stopped. For better or worse we have to see this through.

That doesn’t mean that Cory will make his final journey without us. When the arrangements have been finalized, Cory’s best friend and GWAR’s music tech Dave “Gibby” Gibson, and myself will return home to attend the services and pay the proper respects to our comrade.

Out of respect to Cory, we have officially retired the character of Flattus Maximus. Flattus has decided to return to his beloved “Planet Home”, and will never return to this mudball planet again. And this is a sadder place for that.

Just the other day I heard Cory tell a story about how some 20 years ago he was fourteen years old, at his first GWAR show, grabbing at the rubber feet of our then- current Flattus, and how blown away he was at the fact that now HE was the one getting his feet pulled by the same kid that he used to be. Cory was always in awe of the patterns of life and went through it with a wide-eyed amazement that translated through his playing. I’ve never known anyone who could pick up literally any instrument and rock it the first time he touched it, and more than that make it look easy. Behind that rubber monster outfit, and sometimes even obscured by it, was one of the most talented and beautiful people I have ever known. I know everyone whose life was touched by Cory truly loved him, as do we, his band mates and brothers.

There should be some kind of announcement soon regarding services, etc. It would be great to have a memorial show at some point soon, where some of the bands that Cory worked with could come together and show their love for this truly amazing man who left us all too soon and will be sorely missed by many, many people.

Again condolences go out to Cory’s family, friends and band mates. Gwar won’t be the same without him and his character and he will be missed.