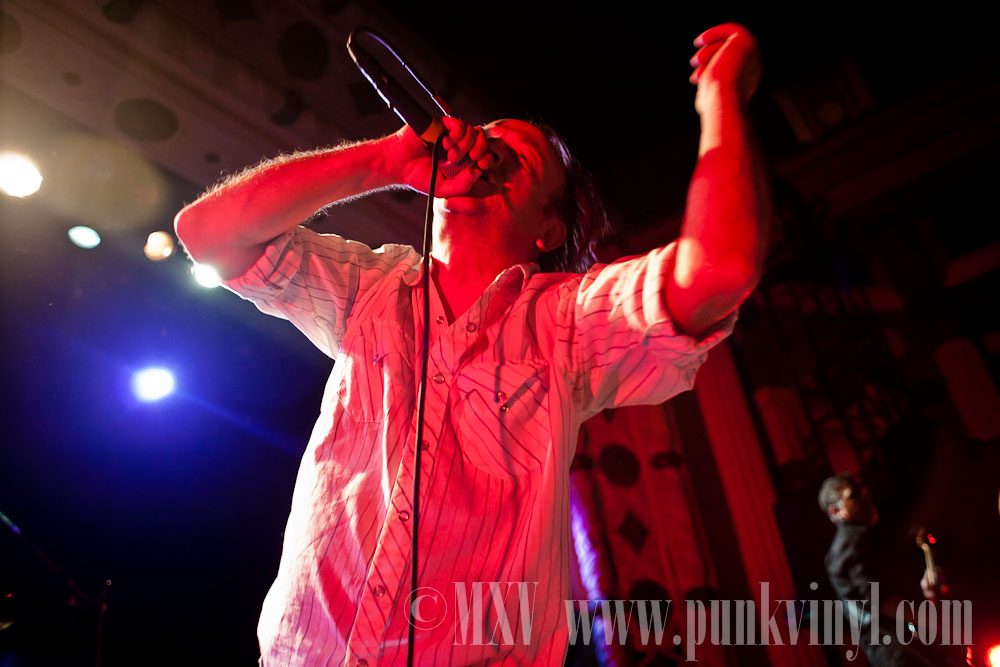 Last night the Metro played host to a very special reunion show from one of the best and most different bands of their time. That band was Scratch Acid and they reformed for a reunion tour which thankfully brought them to town. Aside from a three show reunion stint centered around the Touch and Go anniversary a few years ago the band hadn’t played together in over two decades which is also the last time they ever released a record.

Anatomy of Habit was the only opening band for this show. They had a regular drummer along with a second percussionist who had a rig cobbled together of a fountain drink canister, a big drum, some metal pipes and various cymbals and trinkets. They also had a guitarist, bass player and a singer that looked a lot like Lex Luthor from the Smallville TV series. Musically they had long plodding songs that were a very cool blending of influences like Swans and Neurosis along with doom metal. When they turned on the heavy they were ultra heavy and their songs had really interesting changes in them along with drawn-out heavy and repetitive parts. Their music was pretty intense and they were really entertaining and an unexpected.

The Metro was pretty full when the members of Scratch Acid walked out on stage. They took their places and opened with “Mary Had a Little Drug Problem” which was the best song on their third and final record, Berserker. It was a fast paced and energetic way to start of their set and the middle of the main floor immediately started bouncing up and down and into each other as everyone suddenly felt the need to try to get closer to David Yow as he flailed about as he sang and shouted and gurgled the lyrics to the song. The band sounded well-rehearsed and tight and Yow’s trademark vocals sounded as good as ever proving he still has the pipes. What else he also still has is energy as he rarely held still during the entire set. That song sounded so good that had they just played that and said “thank you, goodnight” it would have been worth whatever the price of admission was but thankfully the band had a fairly lengthy set list in store for the crowd that evening.

The band jumped backward two releases to their debut EP and played “Mess” and “El Espectro” back to back and they sounded just as good as the opener. Suddenly it didn’t feel like 2011 anymore, it felt like this was 1987 and everyone was witnessing Scratch Acid in their prime. After another Berserker track, “Crying Out Loud” they busted out “Crazy Dan” and gave the Just Keep Eating LP some attention. A few songs later they played one of the best songs from that album, “Big Bone Lick” which sounded better than you could have imagined and came across heavier live than on the album. That song especially showcased just what a great unit these four musicians are when they play together and it was simply magical.

Even more magical was when the band followed up with “Albino Slug”, the instrumental song from Just Keep Eating. This was so good it was spine tingling and David Yow played some extra cymbal during the song since he had no singing duties for that song.  They continued with some more songs from the LP before finishing up their main set with some more tracks from the two EPs which formed a hat trick of “This is Bliss”, “Greatest Gift” and “She Said”.

The band came out for a three song encore that finished with them playing their two greatest songs back to back: “Cannibal” and “Owners Lament” which got a huge roar of applause from the audience. When the show was over the band had played nearly their entire discography, the crowd and the stage was covered with sweat, spit, and beer, and Scratch Acid delivered one of the best reunion performances in history. If the band decides to hang it up for good and never reunite again after this tour, they can rest easy knowing they put on an amazing performance and went out on the highest possible note.