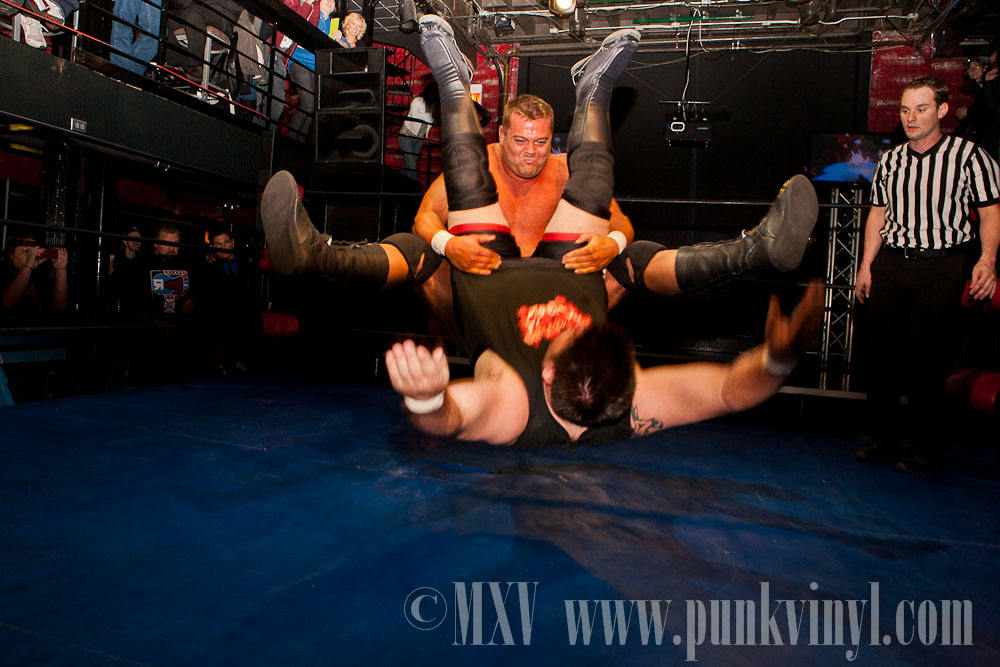 While most of the population was beating each other senseless and pepper spraying each other just to save a few bucks on household goods there was something a lot more entertaining happening downtown Chicago at the Excalibur. Resistance Pro Wrestling made its debut. What does pro wrestling have to do with music you ask? Well Resistance Pro Wrestling  is a new wrestling federation that was started by Billy Corgan of the Smashing Pumpkins. Billy serves as the Creative Director and promised the world that Resistance Pro would be a different kind of wrestling federation. Having your wrestling show in a nightclub certainly is different and gave the show a sort of rock club vibe.

They lined up a lot of good talent from the indie circuit as well as some bigger names who have done time in WWE among other companies. Unlike the two big wrestling federations, Resistance Pro actually means it when they call themselves a wrestling company. The show was heavy on quality in-ring action and had just the right amount of promos and storyline development to make a compelling and fast paced show which made the three-hour length pass by in the blink of an eye.

Joel Gertner of ECW fame got things started doing his trademark shtick where he puts himself over in a filthy way which got a pretty good pop from the crowd. This led to the introduction of the four challengers for the Resistance Pro world title. They were introduced one by one and they were The Sheik (along with his manager Rinaldo Piven), El Generico, Kevin Steen, and Harry Smith (son of the late WWF/WWE legend Davey Boy Smith). Rinaldo did a lot of talking and was really great in his role as a classic heel manager and did a great job getting heat with the crowd while putting over his client The Sheik. The Sheik is some sort of descendant of The Original Sheik either by adoption or breeding and he was every bit as crazy and violent as his predecessor. This led to a match with El Generico which featured some good back and forth action and some cool spots. Ultimately The Sheik prevailed thanks to some outside interference by Piven.

Team Ambition (joined at ringside by the Canadian Destroyer who was a masked wrestler) took on Hallowicked (a Luca styled wrestler with a great costume) and Matt Classic. Matt Classic was also a masked wrestler and when he came to the ring he did some bridging pose on his back that he held for the entirety of the ring introductions. Team Ambition were a well-oiled machine of a tag-team and got the upper hand on Hallowicked. Every time Hallowicked tried to tag his partner to get a break from the beatings, Matt Classic was too busy posing and yelling at the crowd to be there for his partner. After a noble effort of a comeback spot, Team Ambition used some dirty tactics to win by a double team. The match featured some solid action by the three of the four participants who actually wrestled the match and it is likely there will be a Hallowicked/Matt Classic feud in the near future as Hallowicked deserves some revenge for his partner selling him out like that.

In a very short match, Lonesome Jay Bradley defeated Icarus by folding him in half. Bradley gave a good effort but was quickly destroyed by the larger Bradley. Icarus was literally folded in half by Bradley’s finish and was knocked cold and still in that folded position until he was scooped up and dragged out a few minutes after Bradley’s hand was raised in victory.

In a match that pretty much stole the show, The Briscoe Brothers (with manager D’arcy Dickson) advanced in the Resistance Pro tag team tournament by pinning Teddy Hart and Gran Akuma. This match featured some really great high spots that included a superplex and a splash off the balcony! All four men busted their asses in the ring and put on a 5-star match that really got the crowd excited. The Briscoe’s are a great tag team with great chemistry and attitudes and they definitely have all the tools to become breakout stars. They already had quite a number of fans in the audience before their match and that amount likely doubled after the match (ditto for Hart/Akuma as well who more than held up their end of the match).

There was a ladies gauntlet match to crown the first Resistance Pro ladies champion. Cheerleader Melissa, Serenity, Miss December, Sassy Stephie, Simply Luscious and Taylor Made did battle as a new combatant entered the ring when a gong sounded which was about every two minutes. Pinfall or being thrown over the top rope onto the floor was how people were eliminated. No one was eliminated until most of the women were in the ring so the match turned into more of a battle royal than anything. When the herd started thinning a dude in drag came in and started cleaning house. This was Stephen Walters billing himself as Arika Cannons. It came down to him and Cheerleader Melissa and she totally held her own against the guy and it looked like she would be the new champ but after eliminating Walters/Cannons Melanie Cruise came in and made short work of the beaten down Melissa to be crowned the first Women’s champ. She cut a heel promo and then left the ring with her ten pounds of gold (which was a large belt and looked more like 14 pounds of gold).

Next was a three-way dance with The Canadian Destroyer (aka: Petey Williams), Colt Cabana and Necro Butcher. Colt Cabana was the breakout star of this match as he was hilariously entertaining as well as a solid ring worker. How this guy isn’t a giant star already is a mystery because the guy has a ton of charisma on top of being a solid worker. At the start of the match Cabana was stealing the spotlight by poking fun at both of his opponents and then trying to outshine each one of them and coming up short. Neco Butcher played up his big man role perfectly and displayed heavyweight power and got the upper hand at times due to simply being bigger and heavier than his two opponents. The Canadian Destroyer held is own with solid ring work and some flashy moves and after some good spots between the three different wrestlers, The Canadian Destroyer hit his finisher of the same name (one of the cooler finishers in the business today) and got the win. This was another standout match with solid work by all three men with Cabana and Destroyer really shining.

In the main event, Kevin Steen took on Harry Smith as part of the World Title semi-finals. At first glance Steen’s appearance comes off as “average looking big guy” but when the bell ran he played the entertaining heel role to perfection. It was impossible not to crack up at some of the things he was saying during the match while either trying to cheat or while getting the upper hand. Steen and Smith took a familiar spot of two big guys trying to take the other down with a shoulder block and failing and made it entertaining with Steen telling Smith that it is his turn to run the ropes and charge at him because he’s tired of doing the running.  Steen also shined going hold for hold with Smith in a classic style match that had a lot of old-school type of holds mixed in with bigger spots. There was a lot of back and forth and the pacing of their match was pretty well done. Steen’s taunting of Smith made the “rest-hold” spots like a headlock a lot more entertaining. As the match progressed it was clear that neither man had the upper hand and both had even escaped each other’s attempts at the sharpshooter by getting to the ropes to break the hold. Eventually they went to the time limit and the match was going to be called a draw but they were given another five minutes.

During the five minutes both men traded everything they had trying to get the victory which meant facing The Shiek for the world title at the next show but when Smith got Steen in the sharpshooter, Steen was able to hold on until the time once again expired. When the announcer gave word that they could once again continue the match and go until someone wins, Steen grabbed a mic and said that Billy Corgan said he won’t work his wrestlers to death when they are hurt and that he already fulfilled his commitment for the evening and he was tired and going home. This upset both Smith and the crowd and it was decided that the world title match at the next show will be a three-way dance between Smith, Steen, and The Sheik . The Sheik  and Piven didn’t like this and came to the ring demanding the title be given to them immediately as Sheik was the only one who actually won his match and this led to the three men brawling for a few minutes in the ring until Smith got the upper hand and the other two fled for higher ground.

This concluded the show and it was announced that in the adjoining room for the next hour all the talent would be doing a free meet and greet with the fans. All the wrestlers were over there singing autographs and taking photos with the fans and everyone seemed to be really enjoying it and a good amount of fans stuck around to participate. That’s something that doesn’t happen at your typical wrestling show and made this show that much better for the people who bought a ticket.

Resistance Pro put on a really solid effort for their debut show that had something to satisfy just about every type of wrestling fan and the good-sized crowd that packed in that small club seemed to be very satisfied. They have a lot of promising talent and it is going to be interesting to see how things develop from here. Their next show January 13th and if this is any indication of what to expect, it is going to be another good show worth checking out for wrestling fans.

Check out even more photos from this event here!