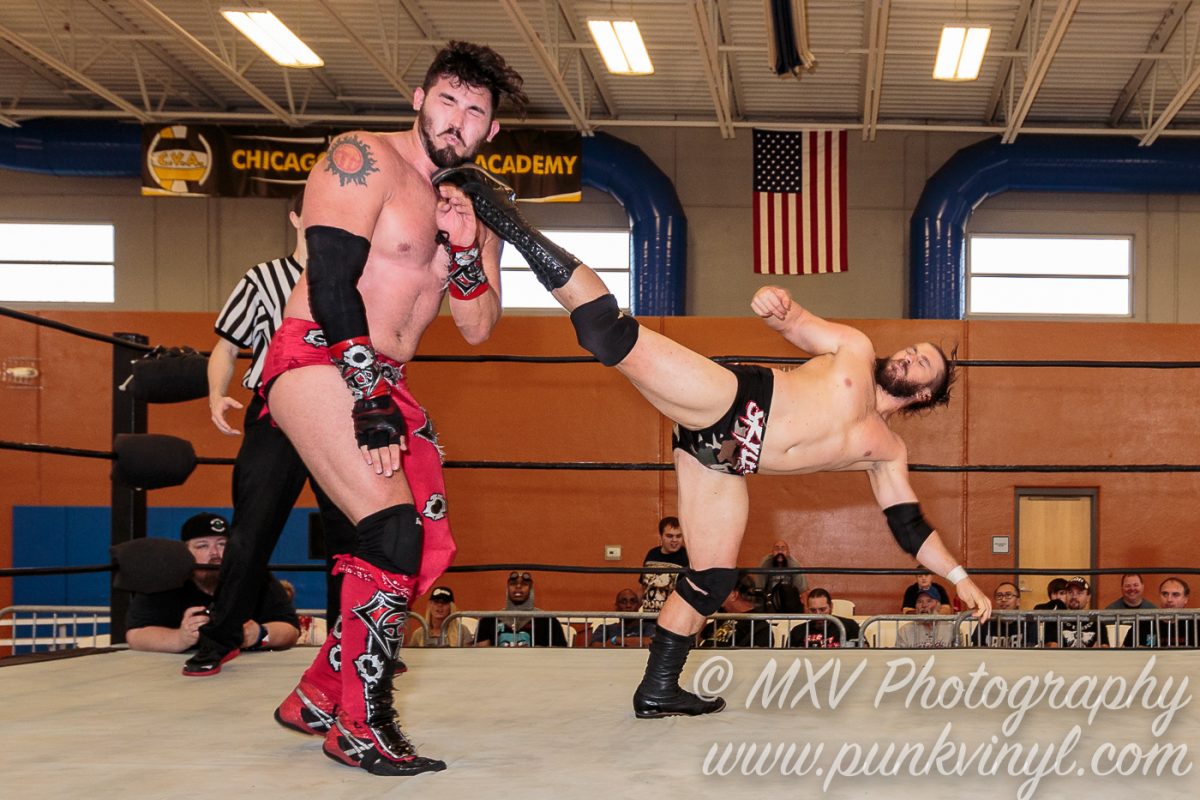 On Saturday the two best independent pro wrestling companies in the Chicago area teamed up to put on an afternoon show in Summit, IL. Resistance Pro Wrestling and Freelance Wrestling presented, Rumble In Summit. It was well into the 90’s outside so it was a perfect day to spend inside a nicely air-conditioned rec. center and see some great wrestling action.

First up was an RPro match that pitted The Southern Savior, John Skyler against The Iron Demon Shane Mercer. On paper this could be a main event anywhere, in practice it stole the show! This match had a stipulation that the winner will get an RPro title shot “any time anywhere” These two guys put on a wrestling clinic. Great mat work, great psychology, and great action. After about 15 mins of excitement and a lot of back and forth, John Skyler pulled off the win and was now able to pick his spot when he wants to challenge for the RPro title.

Next we had a Freelance match that was a triple threat match featuring Brubaker, Arik Cannon, and Shigehiro Irie. All three men are great talents and this was a fun match. After a variety of spots between the three men, Irie got himself a pin and left victorious.

The RPro women’s title was on the line in a fatal four-way match. The champion, Rachael Ellering, put her title on the line against Holidead, Kylie Rae, and Akane Fujita. Over the years, RPro has showcased a lot of great female talent and once again they had four great female wrestlers in one ring. These ladies brought everything they had in their quest for the gold and when the smoke cleared it was Holidead who scored a pin on the champ to become the new Resistance Pro women’s champion!

The final Freelance match of the show was a six-man tag match. Superiority Complex & Gringo Loco defeated Pat Monix, Elliott Paul & Alex Ohlson in a fairly lengthy affair full of big moves and a lot of double and triple teaming.

After getting screwed out of his chance to win the heavyweight title at the last show, Daniel Eads was granted another title shot against Cobra (with Justin King and Tommy Else in his corner). These two guys beat the holy hell out of each other and neither was showing any signs of giving up. Each time you thought one of them was down for the count they somehow managed to keep fighting. During one portion of the match, Eads was looking like he had finally worn Cobra down enough to get a win when Tommy and Justin attempted to interfere. John Skyler ran out and sent the two running for the back which left the remainder of the match to finally be a fair fight. By the time the match ended both men could barely stand but Daniel Eads accomplished his goal and became the new Resistance Pro heavyweight champion.

After the bell rang, John Skyler came to the ring and shook Eads’ hand to congratulate the new champion. After this nice display of respect, Skyler then superkicked Eads which damn near knocked him out. Skyler then called Jacques Baron (RPro owner) to the ring and handed Jacques his contract and said he’s cashing it in now. Jacques called for the bell as Eads was crawling back to his feet. Skyler superkicked his face off, nailed him with a DDT and covered him for the three count to become the new Resistance Pro heavyweight title. Skyler saw the perfect opportunity to get that title and he took it which was smart business but will likely get him an instant enemy in Daniel Eads.

Rumble In Summit was a fun way to escape the outdoor heat with some hot wrestling action (inside a nice, cool building). Hopefully these two companies will continue to do the occasional split show as it is a nice way to showcase the two different products all in one room.