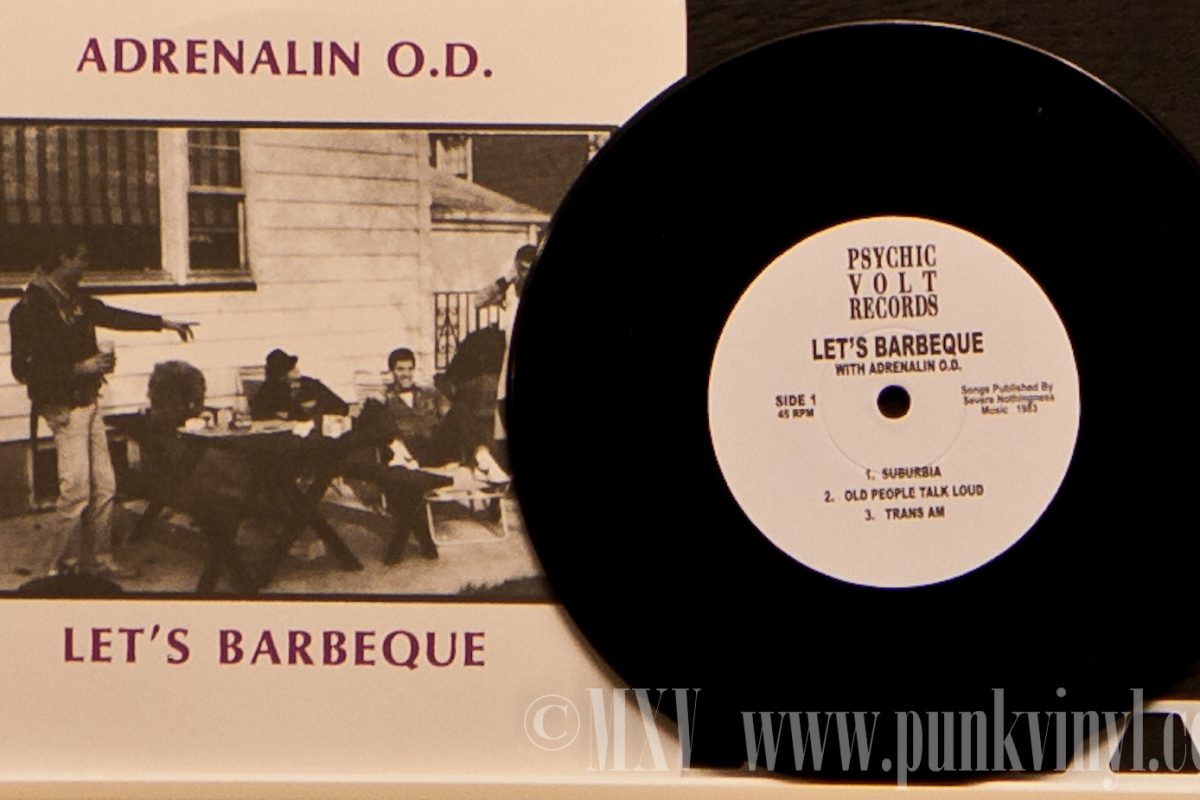 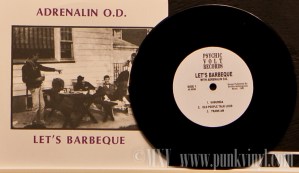 In the 1980’s, New Jersey was a hotbed of quality hardcore bands. The kingpin of the NJ hardcore scene that revolved around the Buy Our Records label was Adrenalin O.D. who also happened to be one of the best bands that state ever produced. These guy played some great hardcore and had a wonderful sense of humor to top it all off. The band put out a couple of 7″s and two amazing LP’s before they slowed things down (and even slow A.O.D. was excellent on one of those two albums they did once they changed their sound). Their first 7″ EP, Let’s Barbeque was originally released way back in 1983 and for the past 25 years it has been a rare collectors item that never saw a vinyl reissue (except for some inferior bootleg in the early 90’s) until now.

Let’s Barbeque celebrates its 29th birthday with a proper vinyl reissue courtesy of the fine folks at Psychic Volt Records. These are the same people who about a year or so ago did a beautiful reissue of Adrenalin O.D.’s first LP that was better than the original pressing. They kept up the quality this time with an impressive sounding and nice looking package. The six songs on this EP sound as good as ever, in fact the sound quality on this reissue actually is improved over the original pressing. It’s a bit louder and cleaner sounding. I played it back to back with my original pressing to compare them.

The record comes in a matte-finish pocket sleeve that preserves nearly all the original artwork. While the lettering on the front and part of the back was either red (first pressing) or blue (second pressing) on the original, it is purple this time out. The original came in a folded sleeve. The label information was changed on the back but aside from that the artwork and photos are identical. The record labels look identical to the originals except the Buy Our Records name was replaced with Psychic Volt Records (in the same font!). The record comes in three varieties: black vinyl (pictured, 500 made), purple vinyl (400 made), and purple haze vinyl (100 made). Sadly I don’t have the colored ones to include photos of.  The only thing missing from this reissue is an insert as the original pressing came with a two-sided lyric/photo sheet that was not reproduced in this reissue. That omission aside it is an excellent looking and sounding record and it is great to have it available again for a standard retail price so those without an original one don’t have to shell out a hundred bucks just to have these songs on vinyl, plus this version sounds better!

If you want’ a copy for your own punk vault you can order whatever variation you like directly from Psychic Volt Records. Hopefully they’ll continue on their A.O.D. reissuing campaign and do the second LP, Humungousfungusamongus, next.