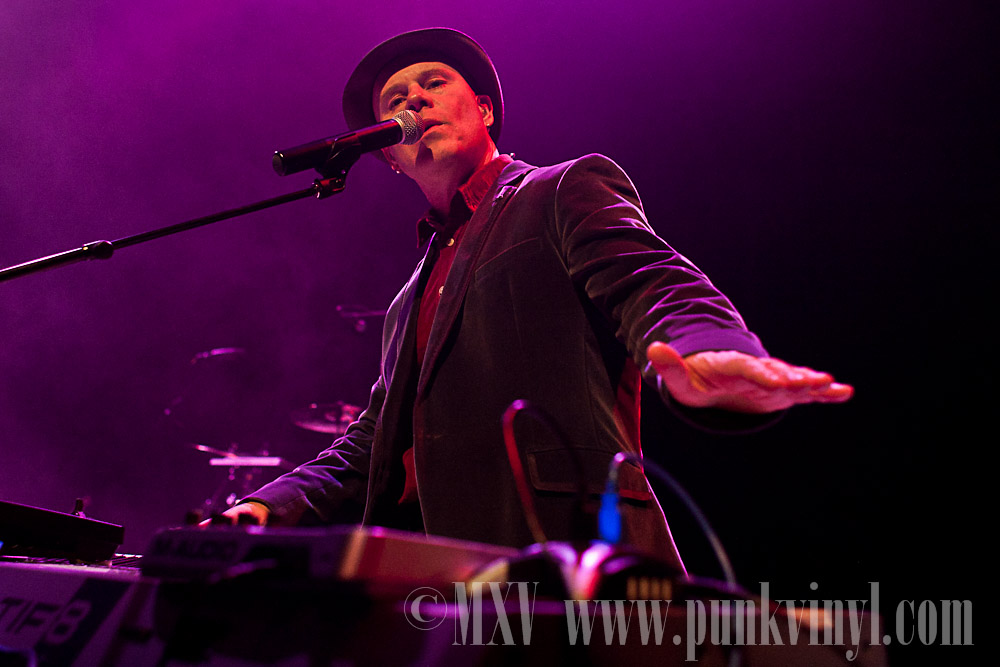 Thursday night, Thomas Dolby returned to Chicago to play the incredibly nice Park West in an evening that saw him showcasing a lot of new material as well as favorites that spanned his whole career on his Time Capsule Tour. Many eager, hardcore Dolby fans filled the tables on the main floor near the stage, many of them sporting patches from a game that was made by Dolby to promote one of his previous records, a game that brought many of his fans together to form friendships that spanned the globe.

First up was a musical duo known as Aaron Jonah Lewis and Ben Belcher. They were a bluegrass/roots type of band which incorporated banjo, violin, and acoustic guitar. They were really good musicians playing a rather overlooked and nearly forgotten style of music and aside from their skillful playing, they were really humble and entertaining speakers. It was very neat to see people keeping this style of music alive and their set was upbeat, diverse, and fun. They received a very warm reception from the audience throughout their entire set.

After a quick shifting around of some microphones, Thomas Dolby and his band took the stage to a very large round of applause. Thomas greeted the crowd and they immediately started playing. He took his place behind his keyboard and synthesizer rig, where he stayed for the remainder of the evening and sang while he was playing his parts and samples. After every song he would stop and tell a little story about the next song he was playing. He was an excellent communicator and a great story-teller and his stories really gave a great insight into how he wrote the songs and give a glimpse of his  mindset at the time. The stories gave added meaning to every song and it was a wonderful touch that gave a special feeling to the performance outside of a musician just up on stage rattling off a random selection of his catalog.

Thomas played a few songs from his latest opus, A Map of the Floating City, including “Evil Twin Brother” (which is amazingly catchy), “The Toad Lickers” (which had a very humorous story preceding it), “Road to Reno”, and “Love is a Loaded Pistol”. The new songs were fantastic and had a nice mix of musical styles such as incorporating synth elements with interesting samples layered on traditional melodic instrumentation. Thomas’ voice sounded great as did the band, and the sound in the venue that evening was nothing short of perfect.

Closer to the end of his set he mixed things up by playing various songs from earlier in his career including “Hyperactive”, “Airhead”, and of course, “She Blinded Me With Science” which he said has been incredibly good to him and that he’s happy to still play it. He followed that up with  a two song encore that was broken up in the middle by a fan from the audience presenting Thomas with an unusual musical instrument he built. The fan got a chance to tell an incredibly long-winded and disjointed story before giving the instrument to Thomas. Once that was completed, Thomas and his band ended the night with a bonus song, “Silk Pajamas” which was a very good note to end the show on. When the dust settled, Thomas Dolby performed will over 90 minutes and gave an incredibly entertaining performance that made for a very happy audience of die-hard fans.