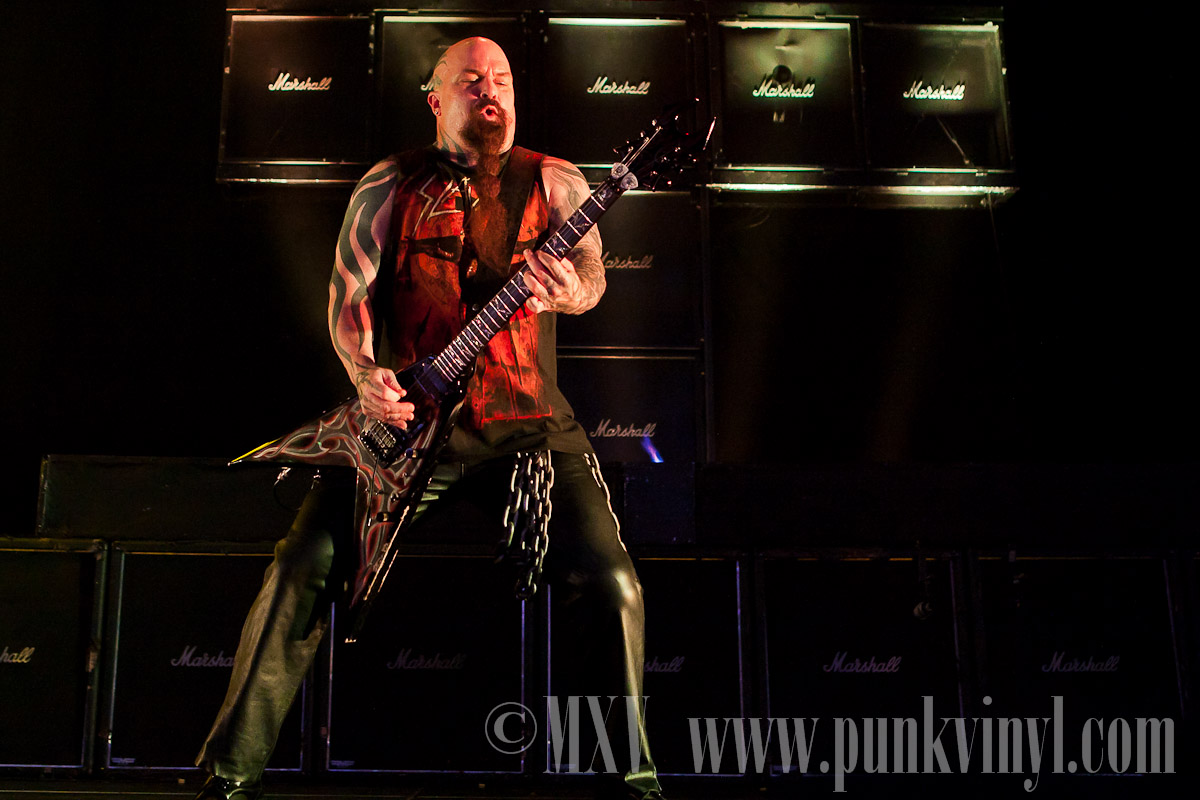 Summer brings two annual festivals on opposite ends of the music spectrum: Warped Tour which caters mostly to pop-punk and emo bands these days, and the Rockstar Mayhem Fest which caters to heavy metal bands and fans of heavy music. The former happened a couple of weeks ago and the latter just happened on Saturday. It was a hot but beautiful day and it was near perfect weather for an all-day outdoor festival that featured some real heavyweights. This year’s Mayhem Fest had a triple whammy of Slayer, Motorhead, and Anthrax! The festival was split up between two stages; one stage outdoors during the day and the other one in the pavilion for the evening.

A band that toured on the other summer festival a couple of years ago and stuck out like a sore thumb because they were so heavy and an actual metal band, Whitechapel, found themselves fitting in better here at Mayhem Fest. These guys played a few songs from their new album and a couple of older tracks and all of it was relentless and punishing. They were about as thick and as heavy as it gets and their singer can growl with the best of them. They seemed to win over the huge crowd which got to the festival early this year.

Asking Alexandria was next. They played mostly fast metalcore with some tempo changes and the occasional melodic part. They kept the tempo speedy for the duration of their set and the various band members were flailing about the stage, especially the singer who never held still. They were one of the more accessible bands of the Jaeger stage due to the melodic breakdowns. They also had a lot of fans in the audience, many of whom were sporting the band’s t-shirts.

Another band who made the jump from Warped Tour to Mayhem Fest this year was next and that was The Devil Wears Prada. It makes sense that they are playing this festival now as they seem to have gotten heavier the past couple of years and scaled down the melodic stuff a bit. These guys must have been drinking the free Rockstar Energy Drinks all day long because the amount of energy these guys had was record-breaking. The crowd went completely nuts too and there was a non-stop sea of bodies flying everywhere.

Heavy metal veterans, Anthrax were the last band to play the outdoor Jaeger stage. The crowd was very excited for them and when they opened with “Caught in a Mosh” the place went berserk. They played some newer material before busting out some more old favorites like “Indians” and “Antisocial”. They easily had the biggest crowd of any of the bands thus far and there were people going back as far as the eye could see. These guys really should have been playing on the main stage in the pavilion instead of out on the smaller outdoor stage but they gave a main-stage caliber performance whose only flaw was it was too short. People wanted more.

Over on the main stage As I Lay Dying took the stage to an already full pavilion full of excited metal fans. Their singer looked like he could be a pro wrestler and he stalked the stage and screamed and growled into the microphone as the band played some really high-caliber metalcore. They were pretty intense and very tight and polished. Their set was very enjoyable and seemed to fly by in no-time. They are definitely a band worth checking out if you are a fan of heavy music.

Motorhead soon followed and the crowd swelled to an even bigger size. These guys have been around in one form or another for more than three decades now and they are considered absolute legends. They came out and made such a huge sound for having only three members that you’d think they had twice as many. They seemed a little light on the older tracks this time out but they did throw in some classics like “Bomber”, “Eat the Rich”, “Overkill” and of course “Ace of Spades” which got the biggest pop of the night. Lemmy didn’t move around the stage very much and just camped out behind his microphone most of the time, probably due to the fact he had his own air conditioner piping cool air to that spot on the stage. They were as powerful and tight as always and Lemmy’s voice was in top form. The crowd of course loved every minute of them.

The highlight of the evening followed and that was Slayer. This was Slayer’s second outing for a Mayhem Fest and they put on a heavy metal clinic. This time they were missing guitarist Jeff Hanneman and had a substitute in his place. If you didn’t know any better you wouldn’t have known that Slayer was missing one of their key members as they sounded as good as always. They opened with “God Hates Us All” and then it was mostly a greatest hits set with some newer songs sprinkled in. The many highlights included “Angel of Death”, “Hell Awaits” “Alter of Sacrifice/Jesus Saves”, “South of Heaven” and they closed with “Reigning Blood”. There was a lot of fire on stage too blasting up behind the band members and lighting up a big Slayer logo in the air behind them. Simply put it was awesome and Slayer is still as good as they ever were, capping off a really enjoyable day filled with some of the best heavy metal music around.

Check out more photos from this show right here!