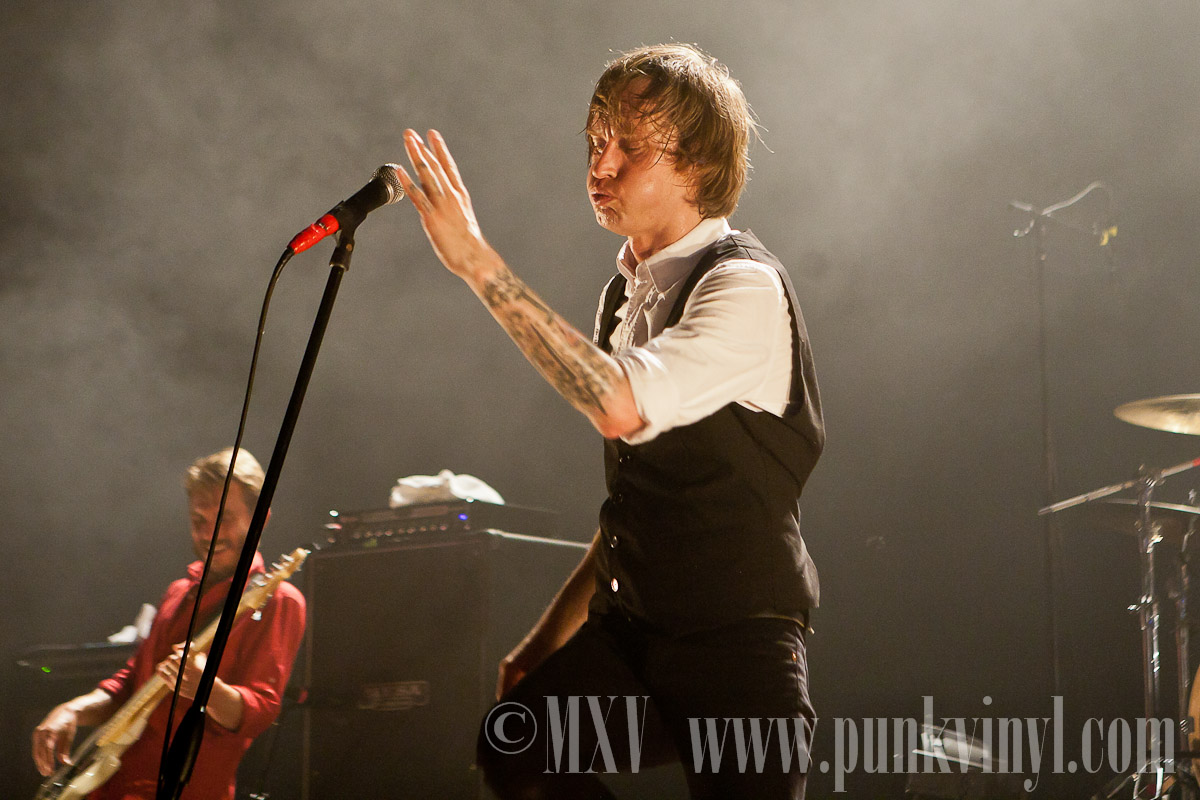 Thursday night nearly 4000 excited people packed themselves into the 100 degree Congress Theater to see an amazing duo of punk bands whose members collectively span three generations of punk rock. The bands in question were OFF! (featuring members of Circle Jerks, Black Flag, Red Kross, and Rocket From the Crypt among others) and Refused who was a 1990s punk band from Sweden who made such a lasting impression that their The Shape of Punk to Come album is often cited by people as one of the best punk rock albums of all time (something that is usually reserved for bands that put out albums 15 or more years before Refused even formed). There was a real excitement in the air of the Congress and the people showed up early to fill the place.

OFF! got the night started on the right foot. They have captured the magic of early Black Flag and Circle Jerks without sounding dated or generic. Their hardcore songs are short and fast and pack an amazing punch. Their songs rarely are longer than a minute; they are just short bursts of energy and it works perfectly. Keith Morris is one of the best punk rock vocalists of any generation and he can still go like he did when he was a youngster. Guitarist Dimitri Coats gets more power out of his single guitar than many bands do with dual guitars and the rhythm section of Steven McDonald and Mario Rubalcaba keep it all together and in quick time. They played nearly every song they’ve written considering they are all so short in length and the crowd loved them.  They are a must-see if they ever come through your town (and they should as they are constantly touring).

A black curtain was lowered to conceal the stage and on it was a Refused logo that was backlit by some white stage lights. A long droning intro signaled that Refused was about to start their show. The intro lasted a good five-minute before the curtain dropped and the band started playing “Worms of the Senses”. The entire place exploded. The entirety of the main floor audience was jumping up and down, singing along and pumping their fists. What was shocking (and a nice surprise) was the lack of crowd surfing which is as about an idiotic practice as it gets. It was as if the audience was a lot more respectful of each other at this show compared to just about any other show of this size anywhere.

The level of crowd excitement never diminished despite the fact that the temperature in the Congress kept rising. The band followed up with “Party Program” and “Liberation Frequency” and the amount of energy on the stage and in the crowd was awe-inspiring. The band played like time had frozen and they had never stopped playing together. This performance was quickly proving why so many people think this band was the bees knees. The band belted out song after song and the fans ate it up like candy. They played a good chunk of songs from The Shape of Punk to Come and sprinkled some older songs in there as well.

At one point in the middle of their set, they stopped playing and the singer gave a long monologue about how he got into punk rock and the bands that changed his life and that led to Keith Morris coming out on stage to join the band as they played two Black Flag covers (“Police Story” and the way too-often covered “Nervous Breakdown”. While normally the act of covering old hardcore songs is considered blasphemy, you get a free pass when you actually have the singer of the band you are covering singing the songs with you. The crowd of course went nuts for it. After that is was back to Refused business as they continued to entertain the crowd with one good song after another and they never once let the heat slow them down.

When it was all said and done, Refused played about an hour and 15 minutes and everyone in the entire building was drenched with sweat and smiling. This show was something really special and things like this don’t come along very often. It was a show so good that no amount of discomfort could taint it.