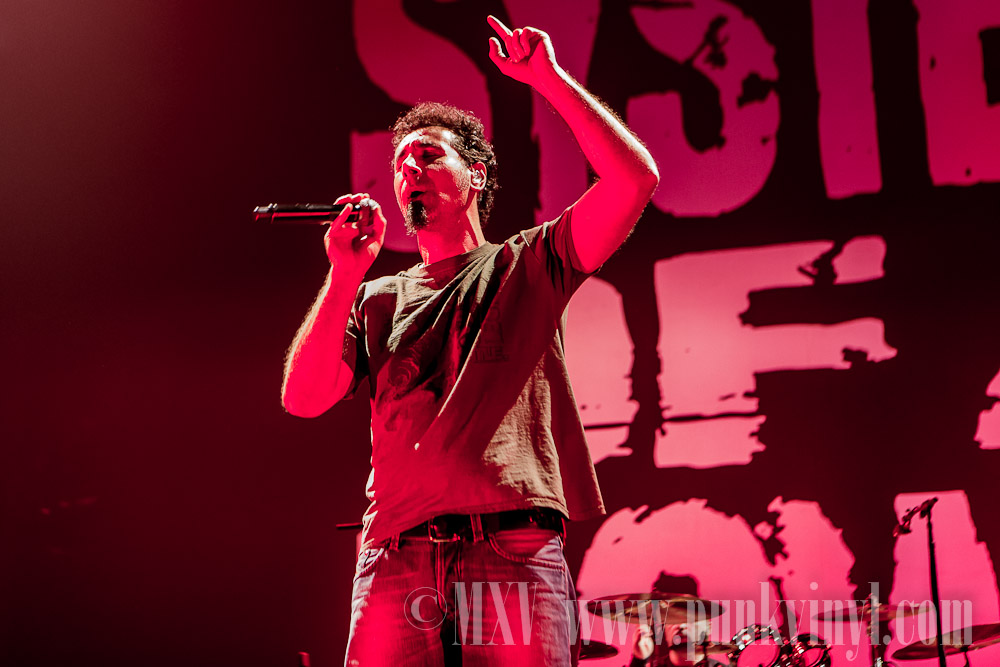 System of a Down and Deftones both enjoyed quite a bit of success from the mid 1990’s through the early 2000’s and both of them are still at it, having outlasted a lot of bands from that era. The two bands joined forces for a summer tour that concluded here in Chicago Wednesday night at the Allstate Arena. The house was packed nearly to capacity which no surprise considering the loyal fan base of both bands.

The venue was already near capacity and the main floor packed from front to back when Deftones took the stage. They got a huge round of applause when they walked out on stage and they were easily responsible for a good section of the audience being there that evening. They had a riser in the center of the stage that singer Chino Moreno often ran up and down on. The band opened with “Rocket Skates” from the Diamond Eyes album. The band sounded very tight and Chino’s energetic yet melodic voice seemed to be in top form. The audience was way into it too and many fans were singing along and there was a lot of dancing going on down on the main floor.

Deftones stuck to that same album for the second song and played the title track from the album which got an even bigger response. From there they touched a bit on some of their other records and played songs such as “Digital Bath”, “You’ve Seen the Butcher”, “Engine Number 9”, and “Root”. Their 45 minute set came to a close with “7 Words” which got a huge response from the crowd. The band put on a very solid performance and proved they still have a lot to offer which is why they are still an active band.

After an equipment change and a sound check, a curtain was lowered over the stage as System of  a Down prepared to take the stage. The crowd was super excited because this was the first time the band has been back in years as they just ended a five-plus year hiatus this summer. With the curtain still up, the lights started flashing in time with the opening riffs of “Prison Song”. As the into progressed the lights flashed faster and eventually the curtain dropped to reveal the band and the audience went nuts. The entire place was on its feet, even the people upstairs in the cheap seats who could see fine without the need to stand were all on their feet for the entire show. The crowd sang along to the chorus, danced, and there was some occasional crowd surfers down on the main floor.

The band didn’t waste any time between songs and quickly followed up with “B.Y.O.B” and “Needles”. From there it was on to a massive 25 songs set list that gave nearly equal attention to all their recorded output. The crowd never stopped singing along and dancing during songs like “Chop Suey”, “Hypnotize”, “Deer Dance” , “Lost in Hollywood” and tons more. The band had curtains behind them that they’d drop to reveal different artwork at different times. Towards the end of their 90 minute set they gave some love to their first album and played “Suite Pee” which Chino from Deftones joined in on vocals for and “War?” before quickly going into their big crowd-pleaser, “Toxicity” which had the entire audience singing along to the chorus of. The band played flawlessly and it was as if no time had passed since they took their hiatus. They ended their set with “Sugar” also from the first album and then called it a night.

Deftones and System of a Down both gave the fans their money’s worth and then some. Two two paired-up made for a great rock show and they left over 10,000 fans very happy and very sweaty at the end of the night, ending their tour on a very high note.

Check out additional photos of System of a Down and Deftones from this show right here!