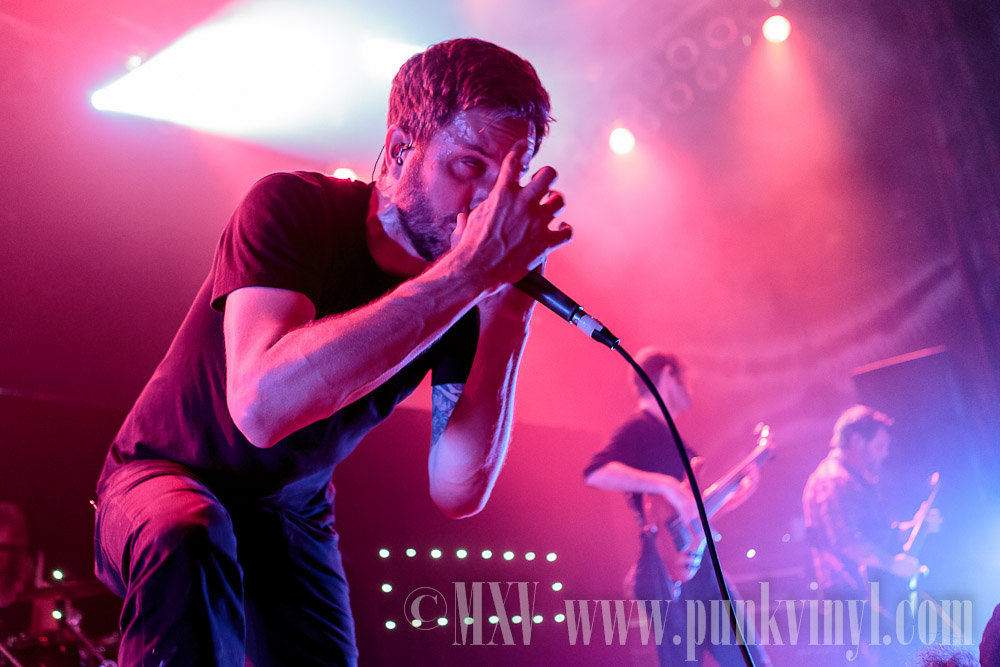 The Summer Slaughter Tour 8/16/12 at House of Blues

The heaviest day-long tour of the year is The Summer Slaughter Tour. This tour features around a dozen extreme metal bands sharing a stage for a full day of brutal music. The annual tour (which features a different lineup every year) made a stop here in Chicago Thursday night at the House of Blues. The place was packed full early on full of people either still on summer break or blowing off work in order to soak up every power chord and every brutal riff that the various bands delivered from the stage.

Long-time death metal veterans Exhumed delivered a punishing set of heavy riffs played at lightning speeds. They were a wall of sound played at top volume and top speed. The fans loved their intense bursts of energy that only drove in high gear. Their only flaw was the fact they only got to play four songs. Granted the songs were pretty long but people were like “that’s it, only four songs?” when they were done. Clearly the fans hoped for a longer set but it made sense given time restrictions and having so many bands on the bill.

After one of the fastest set changes ever seen, Goatwhore took the stage just a few minutes later. They turned up the intensity and the fans turned up the chaos as there was a never-ending sea of bodies flying in every direction. There was so much movement and people jumping up and down that the entire floor was shaking like an earthquake. They played a short set that was so intense it was intimidating. These guys were about as extreme as it gets.

Not one to be upstaged, Job for a Cowboy turned it up another notch as the crowd got even crazier. It was amazing the floor didn’t cave in while they were playing as it was shaking so much. The band delivered a set of their style of extreme metal with surgical precision and these guys were way over with the crowd and got a gigantic response in both applause and crowd movement.

A nice change of pace and speed came in the form of Periphery. These guys were more experimental and progressive in their delivery with lots of long songs with tempo changes, melodic parts and complex songs. They were very interesting and diverse and it really helped keep the day from feeling monotonous. For those who like their music a little more complex while still maintaining some heavy, these guys are well worth checking out.

Veil of Maya were hometown heroes of sorts as they hail from Chicago. They played a pretty solid set of pretty traditional metalcore and their hometown crowd seemed to really enjoy it. They were very heavy and they came off pretty well but they seemed to borrow more than a little from the band Meshuggah in their sound and delivery with the churning, repeating riffs.

The Faceless played a more technical style death metal with rapid fire drumming and a lot of complex guitar noodling and tempo changes. This was coupled with guttural wails and growls from their vocalist. They were pretty interesting in their more complex approach to their extreme metal.

Between the Buried and Me despite only being the co-pilot as far as headlining this show goes easily stole the show. They sounded nothing like any of the other bands on the bill and they had very long, complex songs that ran the gamut from melodic and intricate to heavy and hard-hitting. The use of keyboards added a great extra dimension to their songs and they played with the precision of master craftsmen and put on an arena-caliber performance. When they were in heavy/thrash mode they easily rivaled anyone on stage that day and when they got in progressive mode they were unmatched. Not to take anything away from the veterans the followed them but these guys should have been the headliner based on this performance alone.

Extreme metal veterans and innovators, Cannibal Corpse had the headliner slot of this tour and it is one they earned by years of constant touring and trailblazing. These guys were among the first bands to play this style of brutal death metal and they are still one of the best in the business. It was non-stop heavy, speeding riffs played over rapid-fire beats too fast to count. The singer whipped his head and hair around like a ninja wields his sword and when he wasn’t growling out lyrics his head was in constant motion. The guitarists and bass player also had non-stop flying hair too which is quite a spectacle to accompany the aural punishment they are foisting upon the audience (to be taken as complimentary). The crowd responded with a lot of head banging, moshing, and crowd surfing and the place went nuts until the last chord was struck on stage and it was time to go.

The Summer Slaughter Tour gave extreme metal fans a lot of bang for their buck and it was a show well worth blowing off work or school for in order to catch the whole thing. Much like the season of summer itself seems to fly by in no time, the hours on the clock seemed to move quickly as band after band one-upped each other to deliver a fine day of the extreme.