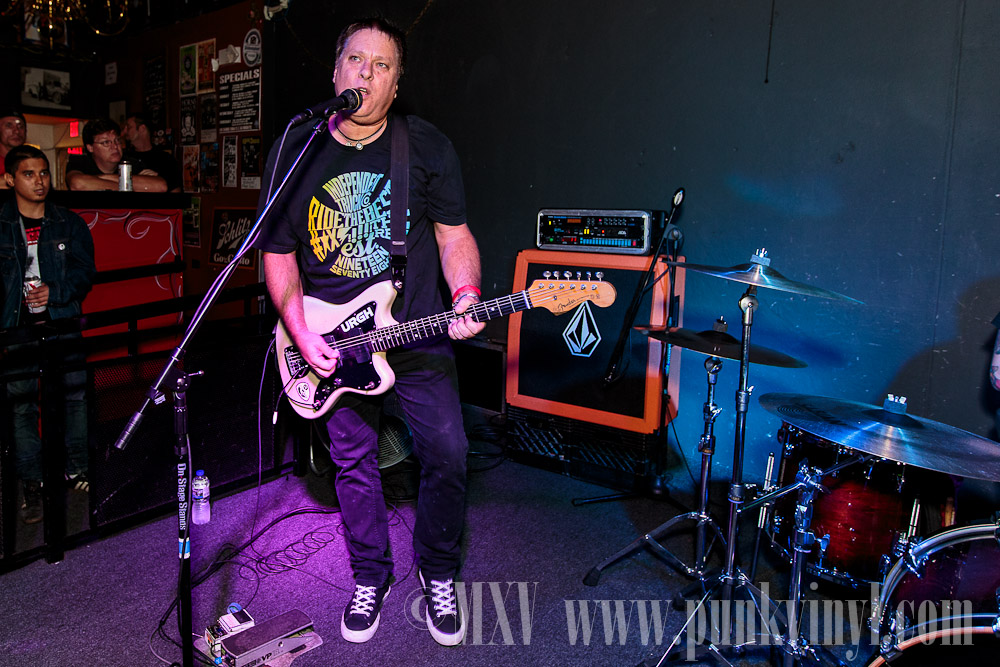 Monday night the western suburbs got a real treat as punk rock veterans Agent Orange not only played a show at the Brauerhouse in Lombard, but it was a FREE show! Not only were fans treated to a free show by punk rock legends, but they had bingo! On Monday nights the Brauerhouse has metal vs. punk bingo where patrons get to play bingo free and win prizes while the club plays a mix of punk rock and metal. This is a lot of fun and everyone in the club played while enjoying some tasty looking food and drinking their beverages of choice. Prizes this evening ranged from t-shirts to posters signed by Agent Orange.

After four rounds of bingo, Agent Orange took the stage to a good-sized and excited crowd.  They opened with “Everything Turns Grey” from their classic first album and the crowd was very pleased. It didn’t take long for some of the younger folks in the audience to start bouncing around and knocking into the older crowd members. The band was very tight and sounded great. They were also in good spirits and it appeared that they were really enjoying themselves while playing and weren’t just going through the motions.

“Tearing Me Apart” followed and the crowd’s excitement never waned, not even during some of the newer songs. On the subject of new songs, Mike Palm informed the crowd that for those that were asking when they were going to release new material that they did, last year! They released a digital single (thumbs down for no vinyl or physical formats) and they played both songs that evening which were “This House is Haunted” and “Whistling Past the Graveyard”. Their newer songs have a great mix of surf/punk/rock that made the band a household name in punk rock in the early days and still sounds great today. Along with plenty of newer stuff was most of their “hits” like “Secret Agent Man”, “Too Young to Die”, “The Last Goodbye” and of course “Bloodstains” which got an extended middle section full of guitar noodling.

When the band decided to call it a night they played well over an hour and really put on a great show. Everyone in the crowd was happy and went home late with smiles on their faces. There was probably a lot of very tired folks at their various jobs on Tuesday morning but it was an evening well worth losing sleep for with fun games of bingo and a great punk band.