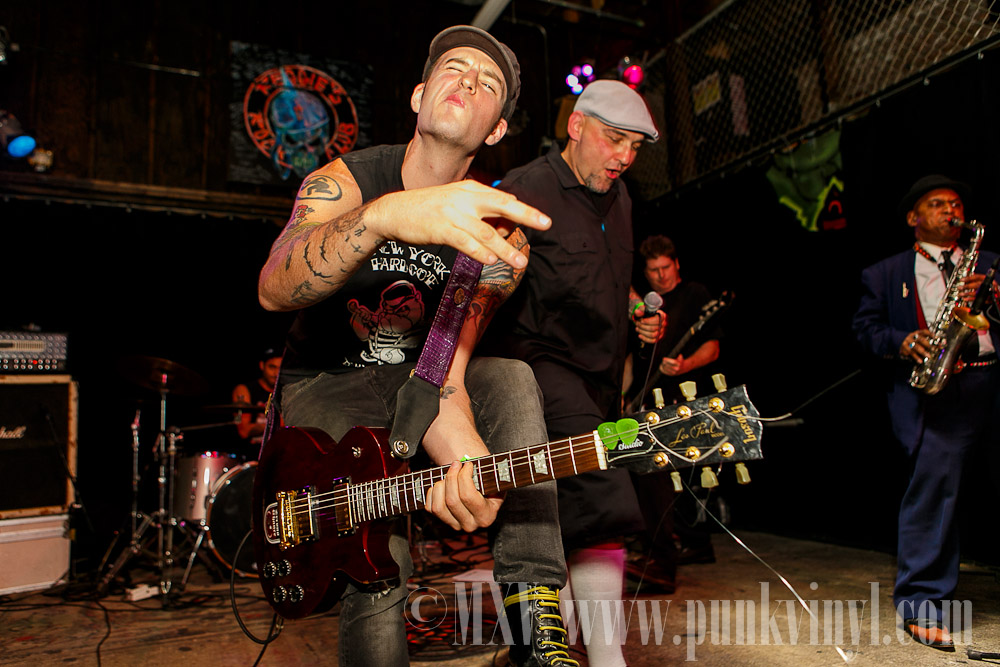 With school having started this week for some, Thursday night meant it was a school night but that didn’t stop some die-hard fans from staying out late and going to see New York punk mainstays Murphy’s Law. They headlined an all-ages show at Reggies on Thursday night.

New Clear Threat was the first band of the evening. Right before they started playing their singer took off his shoes and performed in his goofy red socks which couldn’t have been very comfortable on that concrete stage. That didn’t stop him from moving about and he paced back and forth a lot while delivering some very solid hardcore vocals. The band was pretty straight forward hardcore by the numbers with a very slight hint of metal in some of the guitar work. They were tight and fast and while not overly original (at this point how can you really do hardcore much different that what’s been done?), they were pretty solid and entertaining.

Malt Liquor was second on the bill. They were more of a gritty rock band. This trio played some loud and fast rock that was a bit reminiscent of some 90’s underground rock bands. In fact when the guitarist was setting up or messing around between songs he played the riff to “Seasick” by The Jesus Lizard on more than one occasion. They had a big sound for being only three people. A soundtrack for drinking if there ever was one.

Next up was Anger. This is a new band featuring one of the guitarists from Deals Gone Bad. This band however sounds nothing like that band. Anger has a sound fitting of their name. They were a hardcore band with a huge wall of guitar sound that was pretty impressive in its volume and only coming from one guitar and one bass. Their songs were fast, their vocals raspy and they packed quite a wallop. The only negative was their unoriginal decision to cover a Black Flag song (“My War”) which is about as cliché as it gets but at least they didn’t do “Nervous Breakdown” like every other band does.

While Murphy’s Law always brings a good time when they come to town, what they didn’t bring this time was a bass player! Rather than have to cancel their midwest shows they enlisted the emergency aid of Chicago’s own Herb Rosen (of Rights of the Accused, Beer Nuts, and Liar’s Club fame). The band also brought a saxophone and a banjo player with them as well to add another dimension to their sound. The band opened appropriately with “Quest for Herb” and they sounded very good and you’d never have known that they only rehearsed with Herb only one time the night before the show.

From there it was a set of some of Murphy’s Law greatest hits with an emphasis (rightly so) on the first album. The saxophone was an interesting addition to the older songs which worked well in some songs but not so much in others. The songs otherwise were as good and as fun as ever. Jimmy Gestapo talked a lot between songs and the set highlights included “Cavity Creeps”, “Care Bear”, “Sit Home and Rot” and of course “Beer”. For their final number the band brought Joe Kelly (formerly of Chicago’s Lost Cause and of Beer Nuts) out to do a number (a Beer Nuts song?) which was a nice way to end the evening. The band played about 45 minutes and it was fun from start to finish and the crowd had a good time drinking and singing along.