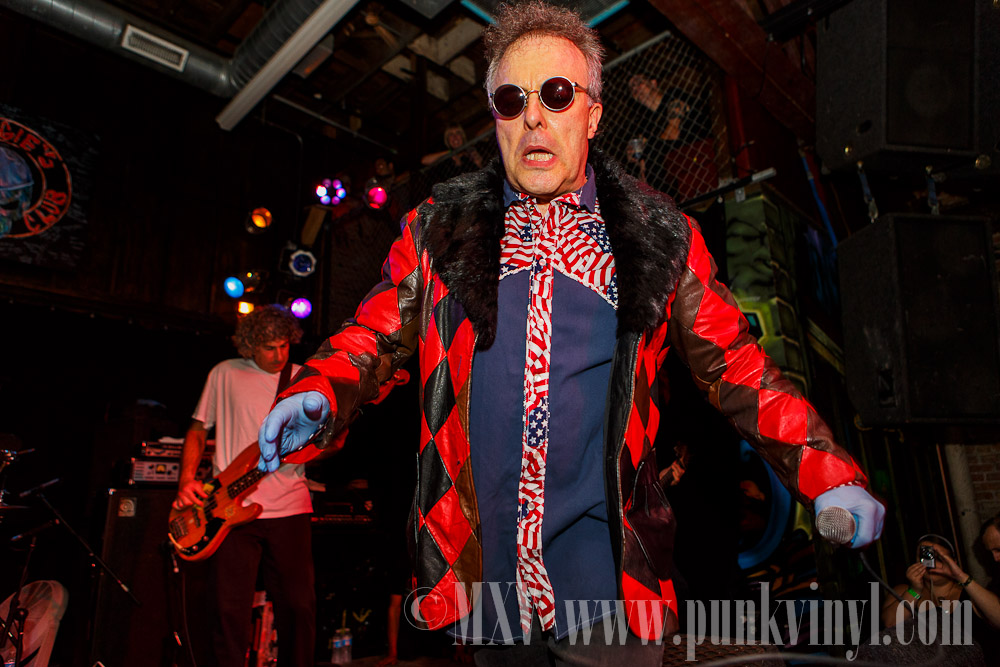 Just 24 hours later after having one punk rock mainstay headline the stage, Reggies had an even bigger legend headline on Friday night. Jello Biafra, a man who needs to introduction, and his Guantanamo School of Medicine (aka: his current band) headlined a show to a packed house that saw fans spanning a couple of generations of punk rock.

First up hailing from Chicago was Last False Hope. These guys had a lot of band members and not one electric guitar among them. They had two acoustic guitarists, a drummer, a stand-up bass, a banjo, and a fiddle. They were kind of like a punk rock Pogues. They had really interesting and varied song structures that incorporated Irish drinking style folk songs with some punk rock riffs (played acoustically) and they were incredibly entertaining. These guys were a total surprise and they won over the crowd big time.

Vortis was next. These guys were more of a traditional hardcore band with an early Husker Du influence. In fact the influence went so far as they had dual vocalists and they played their entire set non-stop. They had a ton of energy and their tuneful hardcore punk was extremely well-played. These guys must rehearse constantly because they were a super tight well-oiled machine.

Detroit, MI delivered Against the Grain as the third act of the evening. These guys played energetic southern-tinged rock and roll. They had a slight similarity to Valient Thorr (and it was no surprise as the drummer was sporting a Valient Thorr t-shirt). Their energetic and fast-temp rock was a nice change of pace from the usual opening fare at punk shows and this band really helped round out the mix of musical styles for this show.

Any audience members who may have been hiding outside or in the back all packed themselves up as close as they could squeeze in hopes of getting closer to punk rock legend Jello Biafra. His band (which features Andrew Weiss formerly of Rollins Band and Pigface among others) took the stage first and played an extended intro which lead to the punk icon coming out sporting a goofy looking coat, sunglasses and rubber gloves. Jello pranced around the stage and flailed around like he was still in his twenties as they played “Brown Lipstick Parade”. Jello ever the showman acted out lyrical passages like some sort of weird mime as he gave a solid vocal delivery with his trademark one of a kind voice. The band was very powerful and spot-on in their playing and he really has amassed a talent group of musicians to be his Guantanamo School of Medicine.

Some quick between song banter segued to a Chicago-inspired song, “John Dillinger”, then “New Feudalism” and “Road Rage”. The crowd went nuts (especially the younger folks in the audience) and they were jumping all around and on top of each other. Jello played to the crowd often and he would walk right up to the very edge of the stage to get closer to the audience and sing right into their faces.  When the band busted out an old Dead Kennedy’s favorite, “California über Alles”, the place went nuts. Kids were jumping everywhere and everyone was singing along to the chorus and climbing over each other trying to sing into the mic when Jello would stick it i out in the crowd for them to sing along.

They went even crazier when after a lengthy introduction the played “Nazi Punks Fuck Off” and “Chemical Warfare”. Mixed in there was some of the Guantanamo School of Medicine’s newest songs that will be on a forthcoming album. After a breather the band came back for a two song encore that featured “Kill the Poor” which once again worked the crowd into a frenzy. When the dust settled Jello Biafra proved that he is still the man and he is still every bit the punk rock vocalist and great showman he was over 30 years ago when the Dead Kennedy’s helped pave the road of punk rock. This was as good of a punk show as it gets and Reggies was the best place to have spent Friday night in Chicago if you are a fan of punk rock of any age.

Click here` to see additional photos from this show!