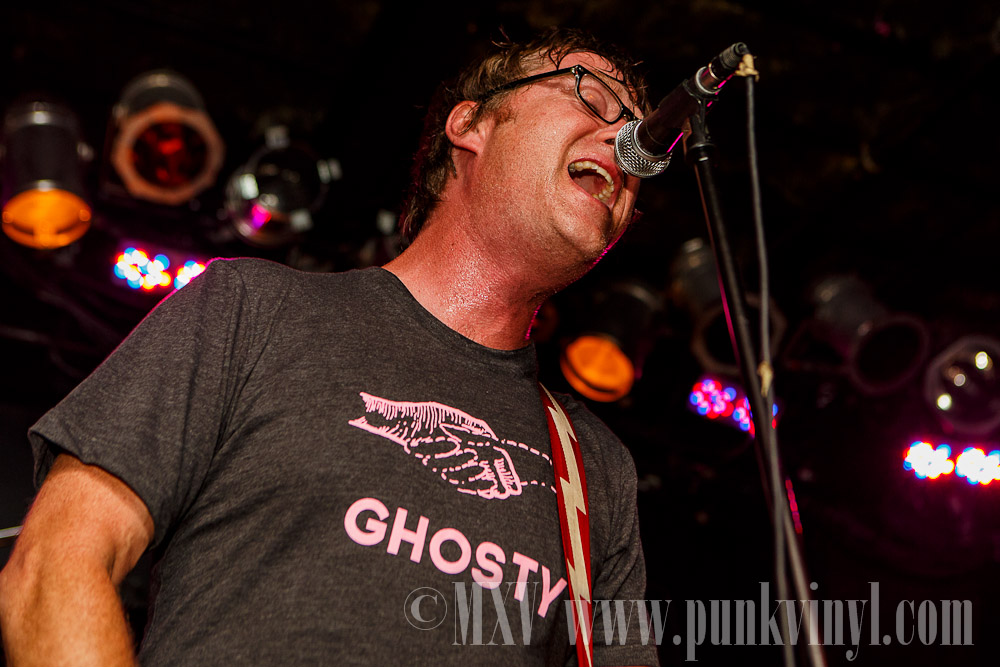 Saturday night was a special evening at the Bottom Lounge as that was the venue that housed two nights in a row of Shiner reunion shows. Shiner was one of the best bands of the 1990s that should have been a lot more popular than they were. They had a very good following but they were infinitely better than a lot of other bands of that era that became a lot more popular. Sadly Shiner called it quits about ten years ago but they left four great albums and a few singles in their wake. When the band decided to reissue their final album, The Egg, on vinyl recently, they decided to get the band back together for a four city reunion tour to celebrate its release. Chicago was the final stop of this mini-tour and they did a two night stint.

First up was Chicago natives Electric Hawk. This instrumental trio blew the roof of the place with some complex and heavy songs. Their guitarist was some sort of electronics wizard and you would need a major degree in electronics engineering to make sense of the elaborate array of effects pedals and gimmicks attached to his guitar rig. For a single person he made a giant sound that was impressive. Their bassist was equally impressive and the guitar and bass players in tandem wove some really great riffs that packed a punch and had an added layer of complexity happening at times that was very interesting. Electric Hawk’s drummer was amazing and he hammered the crap out of those drums and had great fills and complex drumming and was awe-inspiring to watch. These guys should be a household name in instrumental rock music and they are a lot crunchier than a lot of the post-rock bands around these days and are a must-see.

Sweet Cobra was second on the bill. They also hail from Chicago and have been around for quite a few years now and have an impressive collection of songs in their arsenal. They opened with “Leviathan” from their first album and they were about as loud and powerful as it gets. Imagine a faster Neurosis/Isis with shorter songs and a lot more anger and intensity and you can get an idea of what they sound like. They are heavy on the low-end and heavy on the thick riffs and their singer, Remus has a great bellowing vocal delivery. They played a couple of newer songs at the end of their set which sounded great and hopefully a new record is in the works.

The sold-out crowd was extremely excited when Shiner took the stage, they got a huge ovation when the lights came on. The band looked into the crowd and seemed in awe of what a big crowd they had watching them. The band opened the show with what is perhaps their greatest song, “The Truth About Cows”. You couldn’t ask for a better way to get their show started. The band sounded like they never quit and were tight and spot-on. The crowd was all smiles and bopping heads and there was a feeling of electricity in the air as everyone knew something special was happening. They quickly followed it with “Surgery”. In the live setting these songs had even more “oomph” to them than on their excellent studio albums and hopefully someone had the sense to record these for documentation or live album purposes.

They jumped back one album for “Kevin is Gone” which sounded way better than it does on the record. In fact all the songs they played from Starless had the punch that seemed to be lacking in the production on that album and they easily held up well next to the band’s superior material from their other albums. The magic was turned up a notch when they played “Lula” and “Third Gear Scratch” back to back. This was turning out to be Shiner’s finest moment as they were belting out one great song after the next and likely satisfying everyone’s wishes for songs. They were focuses heavily on the last three albums and songs like “The Situationist”, “Pills”, “The Egg” and “Christ Sized Shoes” never sounded better.

After an impressive 17 songs, the band left the stage for a few minutes and then came back for an impressive two song encore of “Semper Fi” and “Giants Char”, both which sounded infinitely better than they did on the Starless album. The crowd was super happy and still wanted more but sadly the band thanked everyone for coming and seemed genuinely humbled by the amazing reception and turnout. People flew and drove in from other cities and states to see this reunion and it was obvious that the band was moved by the warm reception. When the night was through the band played for close to 90 minutes and it was as close to perfection as you could ask for. It was a great show from start to finish from all three bands and it was a very special experience to have Shiner play one more time.