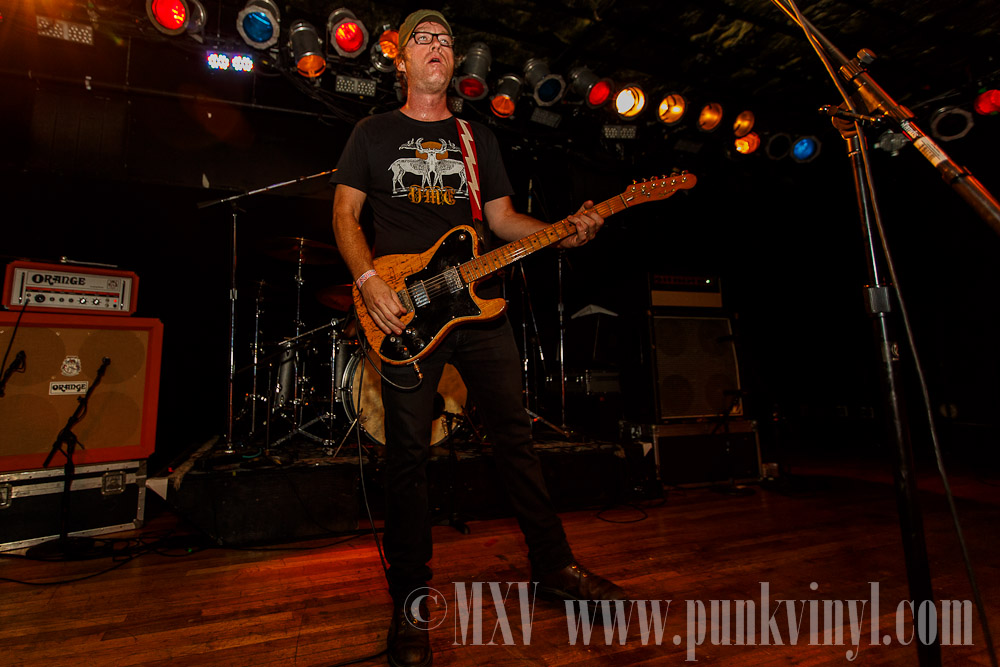 Sunday night was Shiner’s last stand not only in Chicago but anywhere as their four-city reunion tour concluded at the Bottom Lounge. This time the band was joined by two different opening acts than the night before. Despite the fact that there was at least one other big indie rock show (Shellac and Tar were playing together a couple of miles north), they managed to pack in a big crowd on a school/work night as hundreds of fans, many whom were in attendance the night before as well, braved the big rain storm to see Shiner one last time.

First up was Ring Cicada who was doing a reunion of their own this evening. They were mostly an instrumental band that played 90’s sounding math rock. When they did have vocals they were soft and melodic and they had some really interesting and complex songs. They got a very warm reaction by the crowd and hopefully they stick around because they were quite good.

Hailing from Minneapolis, MN, Story of the Sea was the second band of the evening. They played mid-tempo but punchy indie rock with really great drumming. Their drummer was so abusive to his drums that he broke two snares and had to switch them out mid-set. The guitars were kind of hypnotic and repetitive which made for a good groove and they had a singer that had a slight later Meat Puppets sound to his vocals without the southern sounding accent. They played a lot of songs from a new album they just released that night and the crowd was quite taken with them and it’s likely they sold plenty of copies after their set.

The Door’s “The End” started playing over the PA which signaled that it was time for Shiner’s final appearance. It was exciting that they were playing one more time but also bittersweet knowing this was indeed the end. They started their set with the same 4 minutes of perfection that they did the night before and that was with “The Truth About Cows”. It sounded every bit as good and spine-tingling as it did the previous evening. Their set stayed identical for the next six songs as they pleased the crowd with such great songs as “Lula”, “Third Gear Scratch” and “Unglued”.

They threw in a song they didn’t play the night before and it was an oldie and a goody! They busted out “Brooks” from their first album, Splay! It sounded amazing  and it was nice to see that first album getting a little attention this time. From there it was very similar if not the same as the previous night’s set. The many highlights included “Pills”, “The Situationist” (which somehow sounded even better than it did Saturday!), and “The Egg”. When the band came back out they played an extra song in their encore which was “My Life as a Housewife” which they said was their drummer’s first time playing that song. They also played “Semper Fi” and “Giant’s Chair”.

When the final chapter of Shiner’s reunion was completed, they played two songs longer than the night before. If you do the math on that it equaled about 90 minutes of perfection. The band ended their reunion on a very high note and once again they were genuinely moved by the amazing crowd reception and appreciation they received. It was long overdue for these guys to headline to such a big audience compared to the places they played here while still and active band and the world will once again go back to being a little emptier with them gone.