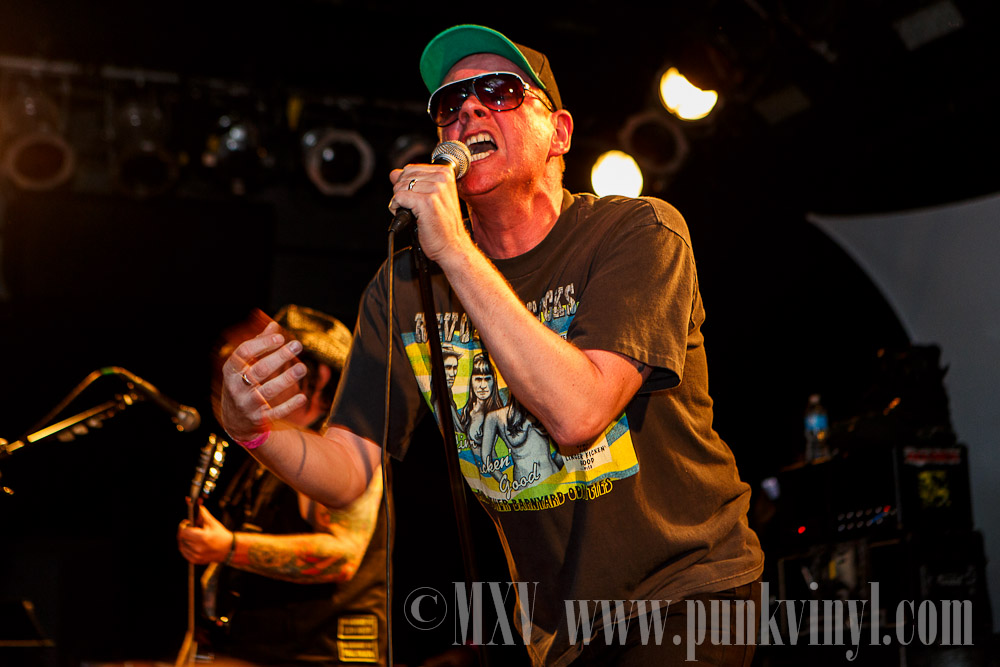 Friday night the Bottom Lounge hosted a very special event billed as Cold Waves: The Jamie Duffy Memorial Concert. Jamie Duffy was a staple in the Chicago industrial music scene for a long time. Jamie was in Acumen Nation and he also did live sound for a number of notable venues around the city, worked in studios helping bands record, and he was a staple of places like Neo where industrial music fans would hang out regularly. Jamie passed away a couple of months ago at far too young an age and left a lot of friends and some family who loved him.  Jamie’s former band mates put together this memorial in part to raise funds for his funeral costs but also to remember him in a special way. The show was a marathon event and featured a ton of industrial bands sharing the stage. Donning the stage on top of an amplifier was a pair of Jamie’s boots, standing over the equipment as if they were keeping watch like he would have done had he been there.

Hate Department played an energetic set that sort of mixed industrial with punk rock. They were on the faster side of the scale and had a very hard edge to them. They also had a lot of people in the audience who seemed to really appreciate them. They played a 20 minute set that was a real crowd pleaser.

The Clay People reformed for this event after a long hiatus. They played hard-edged industrial rock with gruff vocals and a lot of intensity. The people up front were dancing quite a bit during their set and the crowd appreciated that they were back together for this show.

Go Fight is the latest project from Jim Marcus of Die Warzau. They sounded similar in a way to Die Warzau but perhaps a little more accessible. It’s hard not to make the comparison when Jim did the vocals in that band too. They were definitely had more of a dance beat to them than the previous two acts and at the end of their set they played a couple of old Die Warzau songs much to the delight of the crowd.

Martin Atkins and Chris Connelly reunited on stage to play a short set as stripped down duo of The Damage Manual. Martin had a small stand-up drum set and Chris had a guitar that malfunctioned and ended up making some of the weirdest sounds, none of which were intended. After no one could figure out how to fix the guitar, they decided to just play with it and do the best they could. They played a couple of Damage Manual songs as well as “Mania” which was a Murder Inc. song (both Marin and Chris were members of that great but short-lived band as well). Despite the equipment problems it was a nice little set and it was nice to see those two playing music together on a stage again as it had been a long time.

16 Volt was next and it hadn’t been that long since they came through town with Chem Lab. This time out they topped that last performance big time. In fact they probably had the strongest performance of the night. Their industrial rock which was heavy on the guitars sounded really full and hard-edged and the crowd absolutely loved them. Eric made mention that Jamie’s boots were on top of one of the amps and said some nice words about him. A quick scan of the crowd at this moment revealed quite a few people in tears, crying because they miss their friend and loved one. 16 Volt delivered 30 mins of some top-notch music.

Czar was a band that really stood out as being different as they weren’t an industrial band. What they are is a heavy metal band that plays a sort of noisy and heavy post-metal with interesting song structures that really pack a punch. They were likely lost on a good deal of the industrial diehards who probably don’t listen to such things but they were really good and a nice change of pace. The reason they were playing was because the Novak brothers are in that band and they were in Jamie’s band, Acumen Nation who played right after a few Czar songs. Acumen Nation were heavy on the electronics and heavy dance beats and really sounded almost like they were ahead of the curve when it came to dubstep in how some of their songs came across. They played a pretty lengthy set that was very fast-paced and they did their former band member proud with their set of Acumen songs.

Chemlab was next and they opened up with “Codeine, Glue and You” in which they had Curse Mackey from Evil Mothers on stage singing along with front man Jared Louche. This got the crowd pretty excited and when the song was done, Curse left the stage and the band continued with “Suicide Jag” which is one of their finest songs. They completely ignored their first EP unfortunately but played a few other songs from their first two albums. After a few songs Jared dropped the bomb on the audience that this would be the final Chemlab show and after tonight the band is finished and he was going to be starting a new project. This did not go over well with the audience which had a lot of long-time fans in it and it kind of killed the good vibe in the room when they received this bad news. The band did their best to entertain the hell out of them and go out on a pretty good note though and gave a pretty energetic performance.

A version of Revolting Cocks similar to the one that played the Wax Trax Retrospectacle last year but sadly missing Jamie (who did all the heavy lifting putting together the music and samples, etc for that set as well as playing guitar) was the last band of the evening. In Jamie’s place was Eric from 16 Volt and the band did a short set of Revco hits that started with “Beers Steers and Queers” and included “Something Wonderful”, “Physical”, “Stainless Steel Providers” and “Attack Ships on Fire” (in which Chris Connelly stepped down to let Eric from 16 Volt and someone else from one of the other bands handle the vocal duties. It was a fun set that was good but not quite as good as their Retrospectacle performances (and obviously shorter). It was still a good way to cap off the evening.

In what was the final farewell to Jamie and the crowd, everyone from all the bands who played this evening got on stage and they performed  a cover of “Jukebox Hero” which sounded good and was a lot of fun. It was a really nice display of camaraderie and a fitting sendoff to close the Cold Waves Memorial show, a show that clocked in at nearly seven hours in length.

While good as a concert Cold Waves was more than that, it was an event. It was a rare night where what’s left of the industrial scene in Chicago could all get together to share some memories, play some music that meant a lot to many people, and say farewell to a brother that left this world far too young. For more information about Jamie Duffy and the memorial fund, please visit this site.

To see additional photos from this show click here!