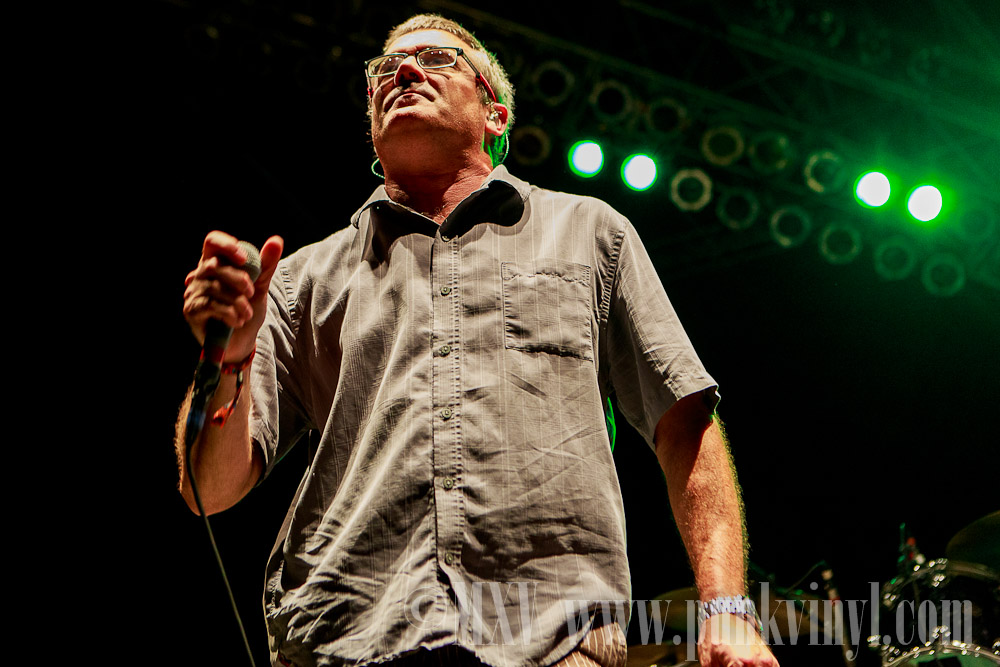 It’s amazing how much Riot Fest evolved from its first event eight years ago. When Riot Fest started it was simply a two-day punk rock festival at the Congress Theater that had some old bands reuniting, some in various or inferior forms (Dead Kennedy’s and “the Misfits”) and mixed it with a variety of newer bands too. It was a pretty cool concept that got bigger every year and evolved into multiple shows at multiple venues (often simultaneously which was both good and bad depending on who was playing where when) and would last nearly a week. This year Riot Fest evolved yet again into something far bigger than anyone could have predicted. For the most part they ditched the five-day multiple venue concept in favor of three big shows over the course of a weekend with two of them being huge outdoor festivals. The lineup was also way more diverse than any previous Riot Fest and this year there truly was something for just about everyone.

Saturday started the first of the outdoor, all-day shows and it was held at Humboldt Park in Chicago. The concept was somewhat similar to a warped tour or Lollapallooza where there was multiple stages (in this case, four) and a ton of bands to see. What they did better than Warped Tour was the way they staggered the start times so there wasn’t a lot of overlap depending on who you wanted to see and it was truly possible to see at least a few songs of most bands. The way they assigned set times to the various bands was also very smart and there was probably very little conflict for fans having to choose between watching two specific bands and being forced to make a “Sophie’s Choice” as to who to miss. On top of the four stages there was a ton of food vendors, beverage tents, merchandise booths and even a bunch of carnival rides and games! It truly had something for everyone including families.

The Adicts, one of the UK’s longest running punk bands containing pretty much all their original members had an early slot in the day at the Rock Stage. A keyboard and instrumental intro summoned out lead singer, Monkey and they opened with a couple of older songs, one of which was “Let’s Go” and that got the crowd (which was quite sizable for being just after lunch time) moving about. They played a nice mix of fan favorites and included a couple of new songs from their new album that was just released. They weren’t allowed to shoot any confetti at this show due to some city ordinance but they did toss out some Adicts branded inflatable beach balls which the audience bounced around (and then fought to keep when the set was over). The band sounded great and the lack of gimmicks didn’t hurt them at all. Having these guys on the bill kept some of the traditional old school punk rock included in the new format and it was a great band to include.

Over at the smaller Rebel Stage Off With Their Heads made their Riot Fest return for the third time. These guys have been quite popular in recent years and rightfully so as they play fast but somewhat melodic punk rock that packs a big punch and appeals to both new school and old school punk fans. They put on a very strong 30 minute set that flew by in the blink of an eye and pleased the large audience that gathered to see them. You’d be hard pressed to find anyone complaining if they came back for a fourth Riot Fest.

The recently reunited Hot Water Music played on one of the two main stages (the aptly named Riot Stage) to what likely was the largest crowd of their career. Thousands of energetic fans sung along, danced and crowd surfed to their melodic punk songs. They played a lot of old favorites and even busted out some brand new material that sounded really strong. It’s really hard not to like this band no matter what you may be into and they are especially enjoyable in a live setting.

Since Riot Fest is something of a giant outdoor party it only made sense to have the party king, Andrew W.K. play the festival and that’s just what he and his energetic band did on the other main stage (the Roots Stage). The band came out first and got the crowd pumped up for Andrew and his female tag-team partner to come out and get the party going. They played his fast-paced party anthems to perfection and Andrew and the lady danced around, pumped fists, jumped up and down and got the crowd to chant along with them. Andrew W.K. live is like a big tornado of fun that blows in, knocks everyone on their asses and leaves them smiling and that’s exactly what happened to the thousands of people who crowded as close as they could to the stage to be near the action.

Teenage Bottlerocket played over at the Rebel Stage. They put on a pretty good performance of melodic and fast punk rock songs. They had a bit of a Screeching Weasel influence to them but were perhaps a bit faster. They played for a half hour and there wasn’t a bad minute in that time span.

The Gaslight Anthem were one of the more straight up rock bands of the day. They were very melodic and had somewhat interesting song structures. They were also hugely popular with the crowd.

Heavy metal superstars Coheed and Cambria played the Rock stage shortly before sunset. For some reason they felt the need to have a smoke machine on stage and it just made everything really hazy looking from the audience perspective. They played their melodic heavy metal (which at times almost breaches emo territory) with surgical precision and they too had a ton of people watching them and either banging their heads or crowd surfing.

Dropkick Murphys took the Riot Stage next and attracted a major chunk of the attendees. It was a sea of people and a nonstop wave of flying bodies that nearly crippled the security up front as they scrambled to try to keep up with the chaos. The band played their Irish fueled drinking punk and thousands upon thousands of wasted people went crazy. It was easily the most violent and chaotic crowd of the entire weekend and they probably had thousands of sore fans when they finished their hour-long set.

One of the greatest punk rock bands of all time and a band almost single-handedly responsible for pop-punk made a return to Riot Fest again this year. That bad was the Descendents and any time these guys get together to play a show it should be a national holiday. They are one of the tightest punk rock bands ever and they played an hour-long set that was heavy on their early hits from the first four albums along with a few from Everything Sucks which is perhaps the best reunion album of all time. Thankfully they pretty much ignored their final album, Cool to be You which was their weakest and every song they played was spot-on excellent. If you showed up to the stage right before the started you would have been stuck about a half mile back as the crowd stretched back farther than the eye could see (especially at night). The band put on a headline caliber performance and should have been given another half an hour as they had tons of material they could have added to their set that they simply didn’t have enough time to squeeze in. They were easily one of the top bands of the entire Riot Fest weekend and hopefully this isn’t the last time they come through town.

Chicago’s own Rise Against headlined the evening and with them being the only band playing in their time slot, they had the lions share of the tens of thousands of people crowded around the stage to see them. They played very melodic pop-punk that is very mainstream friendly and people were dancing and singing along. It was pretty awe-inspiring to see how huge of a reaction this band received from the crowd and people of all ages were dancing and singing along. They played for an hour and near the end of their set they brought out Bill Stevenson and Milo from the Descendents to do a Black Flag cover (which Milo sang and Bill played guitar on). It came off really well and Milo did a better job singing that song that at least one of the four Black Flag vocalists.

As Rise Against left the stage that ended the evening for the festivities at Humboldt Park but there was still a pretty big after-show over at the Congress Theater for those with enough stamina to keep going. Stay tuned to find out what that was…