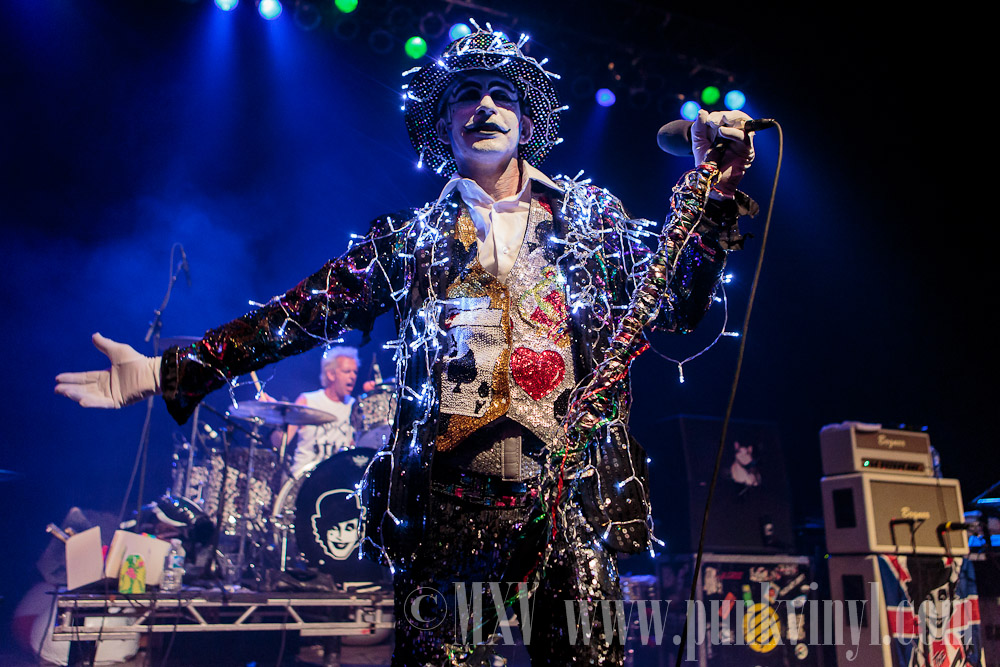 Those with any energy left after a wonderful day-long event at Humboldt Park had the option (if they were a three-day pass holder) of staying out late and catching a great four band bill at the Congress Theater headlined by NOFX. This bill put three bands who have been around since at least the 1980s with one newer band with an old school sound.

Legendary 1970’s punk band The Dickies was the first band to play this evening. They played the very first Riot Fest and it had been way too long since they’ve been a part of the fest so it was great to have them back. The Dickies is one of those bands that is incapable of putting on a bad show and they proved it this evening with a set that was about 40 minutes long that contained all their popular songs. The set included “If Stuart Could Talk”, “Give It Back”, “Nights in White Satin” and of course “Gigantor”. Leonard had his usual stage props/puppets and the band played fast and tight. It is always a treat when The Dickies came to town and their performance alone was worth staying up late for.

The Casualties is also a band that has Riot Fest history. When they came out the lead singer held a beer high up over his head and poured the entire thing into his mouth. The band then started in high gear and played some very fast, high energy hardcore. The singer has a classic raspy vocal style and the guitar and bass players traded places often and jumped around a lot. These guys have been at it for a lot of years now and play like a well oiled machine at high-speed.

The Adicts played third and this was their second performance of the day. Monkey came out in a suit covered with lights and the band more than made up for not being able to shoot confetti during the day by doubling up on it this evening. Monkey had an umbrella that shot confetti and upon firing it, the handle broke off from the blast. They played a longer set this time that included everything they played during the day and then some. The crowd loved them and they once again tossed out a bunch of giant inflated beach balls with their logo on it that got bounced around the crowd for the remainder of their performance. They put on an even better performance this evening than they did during the day and they are always fun.

NOFX was the last band of the evening. When they took the stage Fat Mike announced to the crowd that he was still suffering from the flu and they had to cancel their show the night before but his fever broke so he should be able to perform this evening. After a lot of talking and some insulting of the audience they started playing. The band sounded good but Mike’s voice was still pretty shot from being sick and his vocals suffered for it. He actually sounded more like he did on their Mystic releases (their earliest material) so that was kind of cool. They did the best they could and were pretty entertaining. They spent a of time talking between songs, even more so than they usually do. They played about an hour and they were also a lot of fun and a strong way to end a great day of music that lasted over 14 hours! And this wasn’t the end as the next day brought another full day of music!