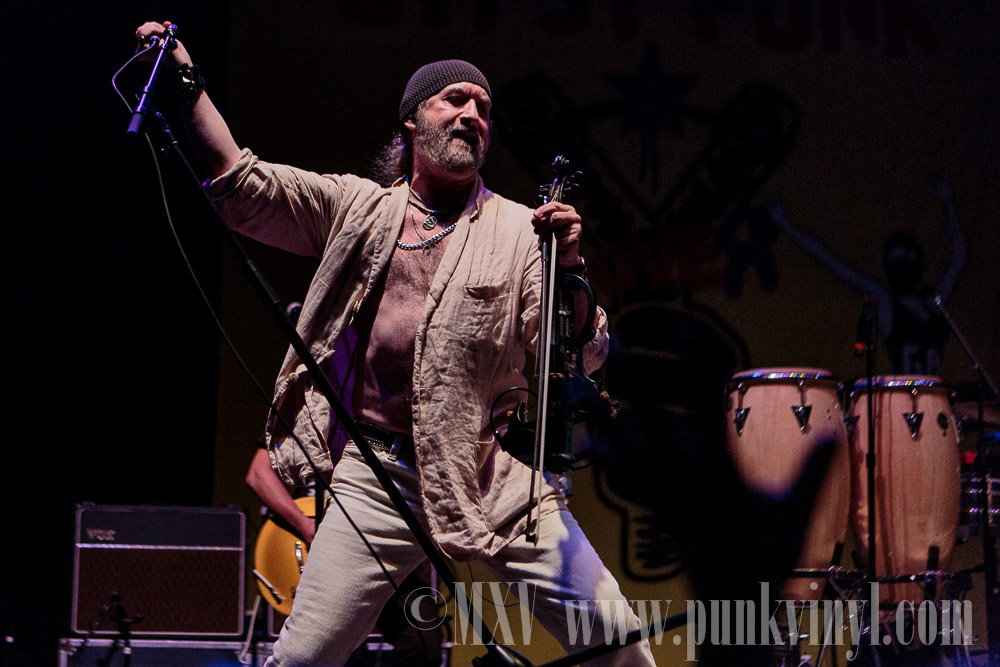 Sunday was the final day of Riot Fest and once again Mother Nature provided absolutely perfect weather for an outdoor festival. You couldn’t have asked for a more perfect weekend to have this festival take place. The final day’s festival had a stellar and diverse lineup of bands as well and once again there was a little something for everyone.

Fishbone played pretty early in the day over at the Rock Stage. This band has been around in various forms for close to three decades now and they were hugely influential and very original. If it wasn’t for Fishbone bands like the Red Hot Chili Peppers wouldn’t have been as popular as they were and possibly they may not have existed or sounded like they did.  The band recently had a couple of original members return to the fold and they were in prime form on this day. They opened the show with their biggest hit and best song, “Sunless Saturday” and it sounded amazing. Everyone on stage was smiling and appeared to be having a good time. From there they played a variety of songs spanning much of their career. Fishbone’s music defies description due to how different it is from any other band. They take elements of rock, jazz, blues, funk, soul and punk and they mix it all up and put their own unique stamp on all of it. Instruments outside the standard guitar/bass/drums included trombones, horns and some weird electronic gimmick that made a bunch of squeals and squelches. They were fantastic and one of the highlights of the day.

A regular on the outdoor festival circuit, Less Than Jake, played next. They are another band that was no doubt influenced by Fishbone. They had a huge crowd at their stage and they played a fun blend of punk and ska. The entire band seems to never stop smiling when they play and it seems to rub off on their audience who also seemed quite happy. The band talked and joked around a lot between songs and announced that they were celebrating their 20 year anniversary as a band. That’s a great run and they show no sign of stopping, let along getting sick of what they do.

The Promise Ring recently reunited after a being broken up for many years. They played their poppy indie rock/punk like they never left. The singer’s voice sounded good but not quite as good as on the records. The band didn’t move around very much and mostly had their heads down concentrating on what they were doing. What they lacked in charisma they made up for with a nice selection of songs from their various albums including a few from their best one, Nothing Feels Good. They played a solid 40 minute set that had something to please any era of their fan base.

Built to Spill played right after The Promise Ring on the nearby Riot Stage. They are a very popular indie rock band with quirky guitars and longer, slightly more complex songs. They were very melodic and the sound for their set was crystal clear.  They come off a lot better live than on many of their records and it was a sensible follow-up to have them play right after The Promise Ring as they share a lot of fans.

NOFX played for the second day in a row at a Riot Fest show. Fat Mike was still sick but looked a bit better than he did the night before but sounded like Peter Brady going through puberty when he was talking a lot. He powered through once again and despite the band joking that their show the previous night was a lot better than this one they hadn’t played yet, they actually outdid themselves. They played almost the same set from the night before but this time to about five times as many people. The kids went crazy for them and they once again put on a very entertaining show.

Awolnation played the rock stage and really sounded different than anyone else who played that stage. They played dance-friendly electronic rock with melodic vocals. They were very upbeat and the audience was actually dancing instead of climbing all over each other which made for a very nice change of pace. They were an interesting diversion from what was the meat and potatoes of the festival.

The Jesus and Mary Chain were next. Musically they sounded excellent and they played a variety of songs spanning most of their career but they lacked any kind of stage presence. They almost looked bored up there on stage and appeared to be going through the motions. They lacked any kind of real energy or passion in their playing which made them come off better as background music while having conversations with other audience members or when going to get food at one of the many food tents.

Elvis Costello and the Imposters played next and pretty much stole the show. They concentrated on Elvis’ early material which was smart considering that Riot Fest was largely a punk festival and still attracts that type of crowd. The sound was amazing and he and his band’s playing was spot-on. His voice sounded great and those songs sounded incredible live. There was a gigantic crowd gathered for him and he was easily one of the biggest draws of the day and the start to the “main event” streak of bands.

Alkaline Trio made a return to a Riot Fest stage an played a tight set of their poppy punk songs. Their style is heavy on the pop and very accessible which has gained them a huge fan base. The thousands of their fans watching them and singing along while dancing and climbing on top of each other was a clear indication that this was one of their better performances.

Gogol Bordello was another very unique act to play this day. They call their music “gypsy punk” and it is a pretty accurate description. Part pirate, part gypsy, part punk, part rock, and part of anything else that tickles their fancy is used to create a lot of high-energy songs with weird tempo changes and a broad palette. The crowd went completely crazy for them and if they played any longer the earth may have caved in underneath the audience from all the jumping around and dancing.

As Riot Fest came to a close, Iggy Pop and what’s left of his Stooges played the final set of the night to the Lions Share of the audience, capping off and amazing weekend of music and fun. The first outdoor Riot Fest easily set the bar higher than the other outdoor music festivals and if they do it like this again next year then festivals like Lollapallooza and that Pitchfork fest are going to have to come up with some way of retooling their festivals to equal just what a great experience and value this event was. This was a festival that was truly fun for the whole family and an incredible value for those who bought the multi-day passes.