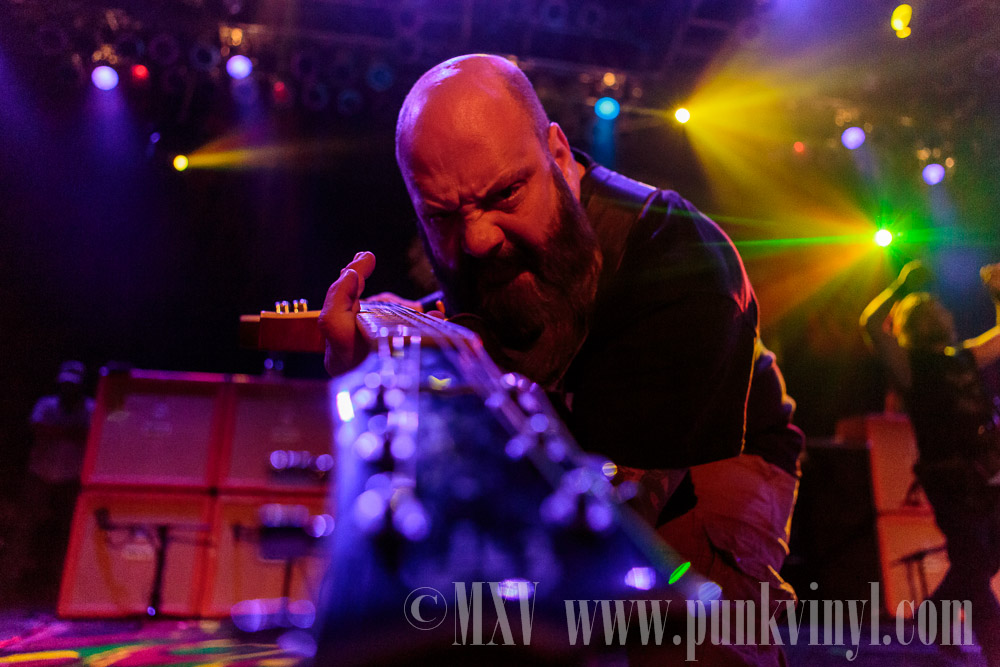 In recent years the return of fall mean New Orleans based metal/rock band Down hits the road for their annual tour. For those of you unfamiliar with the band, it consists of Phil Anselmo of Pantera, Pepper Keenan of Corrosion of Conformity (the 90’s alt-rock version of the band), Kirk from Crowbar/Kingdom of Sorrow and Jimmy Bower of Eyehategod. This band of superstars has been around since 1991 though they only have three studio albums and now an EP released. Every time the band comes to town they pack the house with a lot of rowdy fans who love to drink and party and knock each other around and this time was no different. The place was packed early and it was difficult to move around the House of Blues because it was so packed full of fans.

New Orleans natives, Haarp was the first band to take the stage. They had down-tuned guitars and bass that rumbled so low and was so heavy that it was bowel rumbling and shook the foundations of the  House of Blues. Their songs were about 15 minutes long and they were slow, plodding, thick, and ultra-heavy. The singer shrieked and growled and in the middle of their set decided he would rather sing out in the crowd than on stage and spent a good ten minutes out there with them before finishing the song inside the front barricade. They put the “heavy” in heavy metal and knocked a lot of people on their asses with their powerful aural barrage.

Warbeast was the second band of the evening. The singer of this band was also the original singer (and the only one that matters) of legendary thrash metal band, Rigor Mortis! Warbeast played some really tight and fast thrash metal that hearkened back to the heyday of thrash without sounding too retro or derivative. Their guitar player did have a classic heavy metal look with spiked arm gauntlets and was very flashy in his guitar playing. The signer had a cool looking chain link half mic stand that fit with that look. They really worked up the crowd to a frenzy with their top-notch thrash and there was a pretty sizable mosh pit going the entire time. And one point Phil Anselmo of Down came out on stage and put them over saying it was their time now and they were the future. He may in fact be correct.

The packed to capacity crowd surged forward as everyone tried to get as close as they could to the stage to see Down. They opened this show with “Eyes of the South” from their first album,NOLA, and the crowd wasted no time getting crazy. There was a huge “mosh pit” (more accurately a giant game of human bumper cars) and tons of pumping fists and banging heads. The entire main floor of the club was a big sea of moving bodies. The band sounded very powerful and Phil Anselmo stomped around the stage, posed, threw up the horns, pumped his fist and flailed around in his usual trademark style. His raspy, powerful and sometimes melodic delivery was strong.  They played a new song, Witchtripper from their brand new EP next. It had trademark heavy riffs and a classic Down feel to it. The crowd seemed to like it as they didn’t let up on their rowdy antics at all. It was nice that they had some new material to play as it had been five years since their last record so now they had some fresh songs to throw in with the usual favorites.

They played another older song before once again debuting another new song, “Open Coffins”. They were batting 1000 with these new songs as they sounded easily as good as the band’s long-time staples and the crowd never stood still during them. In between songs, Phil Anselmo spent a considerable amount of time talking to the audience, sharing stories, anecdotes, and announcing what the next song would be. The song announcement was usually complimented with Phil instructing the crowd to go wild but these instructions were unnecessary as historically the audience at a Down show is chock full of extremely rowdy and intoxicated fans and this was no exception. In fact the crowds get crazier with every subsequent tour the band goes on.

The band played a few songs from their first two albums and some from the new EP but they strangely played nothing from the third album. Songs from that album were featured on their last few tours so maybe the just scrapped them in favor of the new songs while keeping most of the fan-favorites of their repertoire. Truthfully the crowd probably didn’t really mind what songs the band was playing so long as they kept playing. The floor was shaking during some favorite like “Stone the Crow” and the extended “Bury Me in Smoke” which featured members of the opening bands taking over the instruments for the finale gave Down fans a soundtrack for going crazy and left them covered in beer, sweat, and even blood. The band was on stage for close to 90 minutes (a good 15 of which was taken up with Phil talking) and tore the roof off the House of Blues as the audience did their best to destroy the insides of the place at was an amazingly good metal show.