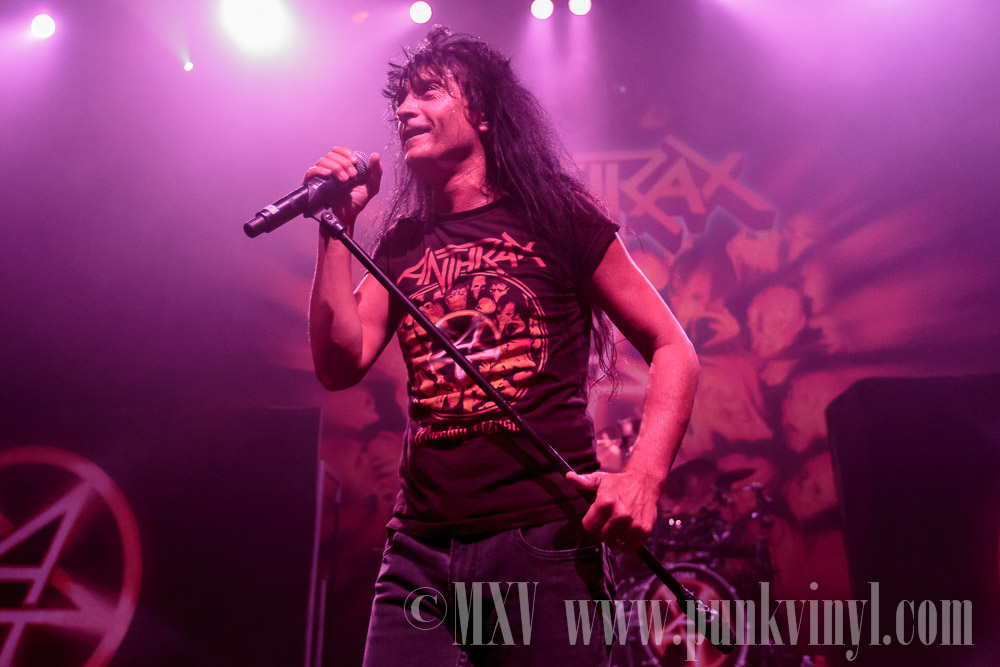 Anthrax 9/27 at The Vic Theatre

Thrash metal stalwarts Anthrax returned to Chicago for the third time in a year to headline a show at The Vic. The band has been touring almost constantly since late last year when they released a new album with all but one member (Dan Spitz) of their “classic lineup” titled Worship Music. Their last outing here was at the Rockstar Mayhem Festival where they were one of the best bands of the day but played way too short of a set. This time out they had a lot more time to play.

The venue was pretty crowded, especially on the main floor where metal fans of all ages packed in as close as they could to the action when the band took the stage. The band opened their set with “Fight ’em til You Can’t”  from the new album and they started off with a ton of energy that quickly rubbed off on the excited crowd. The new song sounded a lot like the classic Anthrax that gained millions of fans worldwide and it showed that the band can still write compelling anthemic thrash metal songs. They quickly followed that up with one of their top classics, “Caught in a Mosh” from their most popular album, Among the Living (which was as close to a perfect thrash metal album as it got back in the day).  The crowd went crazy during this and the band members were constantly moving around the stage and Joey Belladonna got a lot of the audience to sing along during the chorus.

The band has been around for 30 years now but you’d be hard pressed to tell that these guys were getting older by the amount of energy and passion that they were playing with this evening. They were constantly in motion and it showed that they like what they are doing and aren’t just up there for a paycheck. They played a couple of new songs which sounded good and the crowd seemed to really enjoy and then sprinkled in some of the big hits like “Antisocial” and “Indians”, the latter which they stopped in the middle of the war dance breakdown because Scott Ian said that the crowd wasn’t nearly active enough and accused them of trying to embarrass drummer Charlie Benante in his new home town of Chicago. This gave the crowd the kick in the ass they needed to pick up the pace when the band tried again and then completed the song.

They got a huge pop for “The End” from Persistence of Time and followed it up with a pair of new songs, “In the End” and “The Devil You Know”. In what came as a big surprise and a real treat, they played a song from Fistful of Metal, their first album they did before Joey Belladonna joined as vocalist. The song was “Deathrider” and it was a real great blast from the past and worked well with Joey singing.

After close to an hour of playing the band left the stage and returned a few minutes later for a three song encore. An extended intro started off “Among the Living” which sounded so good it was spine-tingling. They followed it up with “Got the Time” and then for their final song of the evening they went out on a huge high note with “I Am the Law” which had most of the crowd singing along. When they finished they played close to 75 minutes and showed everyone in the audience that not only do they still have it, but that the past year of near constant touring has put them back in prime fighting shape and they are more than capable of putting on a compelling thrash metal show that is well worth seeing.