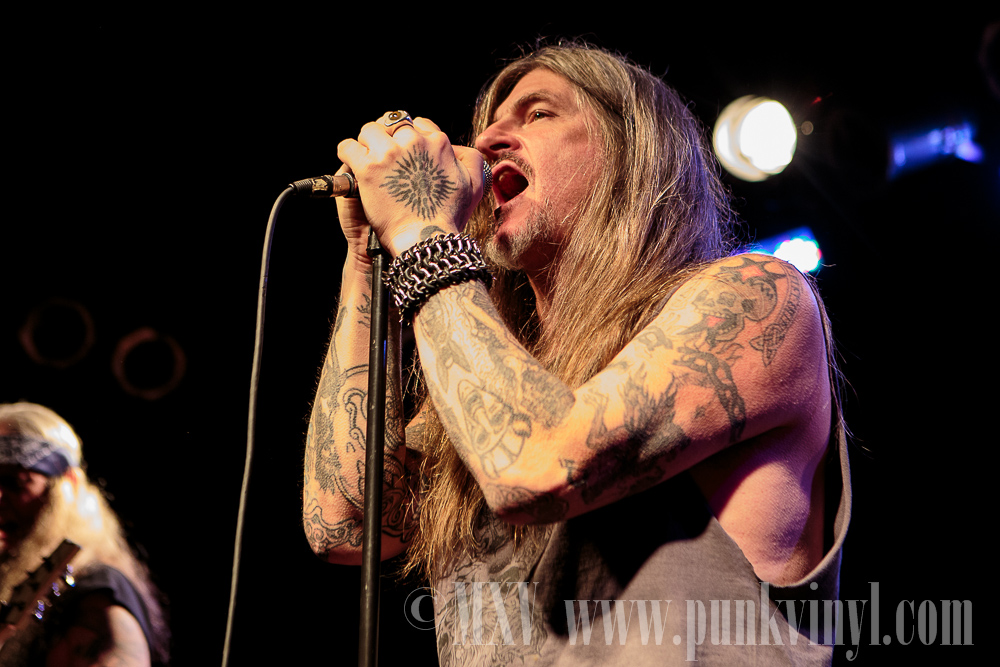 Last night could have been considered a heavy metal holiday as Saint Vitus returned to Chicago for the first time in nearly a decade. They not only returned but they brought Weedeater with them! The Bottom Lounge saw a good turnout of metal fans willing to stay out late on a Sunday night and those that did were treated to a four band bill.

First up was Kabuki Mono. This band is actually Yakuza doing an improv set. They had video images playing behind them and played pretty much in the dark. They didn’t really have songs in a traditional sense, instead they just had a half hour jam session. Jam session isn’t really an accurate description as they didn’t jam, they rumbled with a lot of droning low-end and gloom and doom. The singer had a ton of effects gimmicks that he occasionally sang through and when he wasn’t doing that he had a variety of horned instruments to play. They were interesting for about the first half of the set but it just went on too long without enough variation in what they were doing to be compelling for a full half hour.

Sourvein played some thick and heavy rock that had a sludgy sound sort of like Weedeater but their songs were faster paced. They had a real thick sound and incorporated doom metal elements into their sound as well. They were solid and for their last song, Randy from Lamb of God came on stage to sing along to a song called “Dirty South” that got a huge pop from the crowd.

The masters of sludge, Weedeater took the stage next. After walking out to the Sanford and Son theme Dixie took a swig of the bottle he was spinning around and they got down to the business of laying sludge. “Mancoon” was the opening track from their latest album, Jason the Dragon and it was thicker and heavier than ever. The drummer, who was located front and center stage hits his drums with such force that it sounds like thunder and you can actually feel the drum hits in your bones.  The guitars were loud and fuzzy and the bass was tuned so low that they really need an extra letter of the alphabet to describe it. As is typical for a Weedeater set, Dixie bounced and contorted all over the place while banging the thickest low-end rumbling known to man out of his bass. They focused on material from the two most recent albums which just so happen to be their best. The crowd loved them and heads were banging and fists were pumping the entire time. Anyone who may not have been a fan of the band before last night certainly left one as they put on a headline caliber performance that would have been worthy of an encore.

Seasoned doom metal legends Saint Vitus took the stage to a very excited crowd. They opened up with a new song, “Blessed Night” which is on their first new album since 1995 titled Lillie: F-65. The crowd was an entire sea of banging heads and people seemed to be familiar with the new song already. They quickly followed up with “I Bleed Black” from the V album. The crowd really turned up the head banging and cheering when they went back farther in time and played “War is Our Destiny” which was from an album that singer Scott “Wino” didn’t even originally sing on!

The band’s trademark doom guitar sound that Dave Chandler was a pioneer of sounded great and powerful. His gray hair flew around as he walked around his section of the stage delivering great riffs and solos that looked as easy to him as a hot knife slicing through butter. The band’s new drummer was an amazing powerhouse and had a lot of flash in his playing without resorting to any parlor tricks like twirling or tossing drumsticks. The bass player (and other founding member of the band) was pretty subdued and mostly stood in place looking down and focusing on his bass. The sound was crystal clear and very loud and Wino’s voice and vocal delivery were spot on. They played a few new songs and mixed in a couple more old favorites until they ended their set with “Born Too Late” which got the biggest reaction of the night from a very appreciative crowd. The band played a little over an hour and it was a performance worth nearly a decade of waiting for them to return to Chicago. Hopefully they won’t let another decade pass before touring again as the world could definitely use a little more Saint Vitus in it. It was nice to see the band finally getting the recognition they deserve as they were 25 years ahead of their time when they started releasing records and it seems that only in the past ten years has the world finally caught on to the magic that is Saint Vitus.