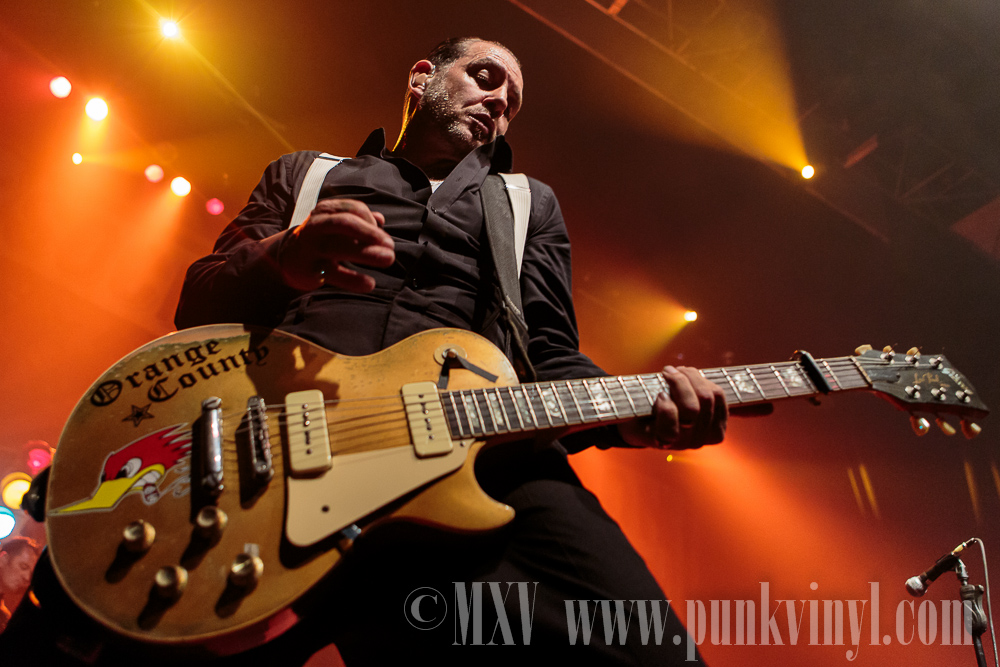 For the third fall in a row, Social Distortion hit the road for a U.S. tour and made a stop here in Chicago. This time out they did a two-night run at The Vic and Friday was the second of those two nights. The place filled up fairly quickly with fans of all ages (as long as that age was over 18) and the crowd was eager for a good rock show.

First up was The Biters. This four-piece played a mix of rock, glam, and power-pop, all with a punk attitude. They looked sort of like a classic glam rock band with smaller hair and had all kinds of attitude. They bore a similarity in sound to the New York Dolls. They played about a half an hour and were decent but didn’t blow the roof off the place as the crowd seemed mostly apathetic during their performance.

Hailing from Canada, Lindi Ortega played second. She had an acoustic guitar and a band that consisted of a drummer and an electric guitar player. Her physical beauty was matched by her vocal beauty as she had an amazing singing voice that was a bit bluesy and soulful. Her catchy songs and amazing vocal delivery quickly won over the audience who were showering her with praise between songs and those that may not have been so easily swayed by her music were won over by her charming personality as she talked to the audience a lot between songs. If one could muster up any complaint about her 45 minute set it would be that a number of her songs had a very similar sound but overall she was an act well worth seeing and this tour is likely going to really put her on the map and expose her to tons of new fans in every city of this tour.

When Social Distortion took the stage it looked very similar to their last two visits with various trinkets decorating the amps and stage but when they started playing things were very different. The band opened with “All I Can Do is Cry” which was a song from one of Mike Ness’ solo albums. This was as different as it could get since the last two times they were opening with a couple of songs from Mommy’s Little Monster. The crowd didn’t mind and people were smiling and many die-hard fans seemed to be familiar with the song. They quickly followed this up with the song, “Far Behind” which was only available on the Greatest Hits compilation. Mike Ness was once again dressed like a distinguished old gangster and his voice and playing was flawless.  For the first song, bassist Brent Harding was playing a stand-up bass which totally fit in with the bands old-time gangster era image and the band had a look and sound you’d expect to see playing in a swank nightclub back in the prohibition times as made-men are sipping their booze.

The band went to some familiar (and popular) territory with “Bad Luck”, a song that got a huge pop from the packed audience. Mike’s singing was excellent and the crowd both upstairs and on the main floor was full of people singing and dancing. There was no real “mosh pit” and no crowd surfing, it was just a crowd enjoying a great rock and roll band without beating each other up. “Machine Gun Blues” from the band’s latest album preceded the only punk-rock era song of the night, “Telling Them”. This time out the band really changed things up compared to the last two tours and omitted “Mommy’s Little Monster” and “Another State of Mind” which were staples of recent tours and usually the only old punk numbers they’d play. This time out they not only omitted that but some other staples of their set in favor of some songs that they haven’t played much recently. This was a great move by the band as it was like a reward for those that have been attending recent shows by giving them something different in lieu of new material and it was a very welcome change. Some of the choices were very unexpected, such as playing two Mike Ness solo songs and if the band was only going to pick one Mommy’s Little Monster era song, “Telling Them” was a wonderful choice and sounded great this night.

As far as the “hits” go, Ball and Chain”, and “Cold Feelings” were both represented. A blues number that Mike said he wrote years ago but the band never recorded, “Black Magic” was one surprise of the evening and the harder-edged “Dear Lover” was another highlight of the set. The band played every song perfectly and Mike entertained the crowd between songs with some stories and small-talk.  As the night was nearing the end, the band ended the show with “Ring of Fire” which the crowd was singing along with and then they left the stage as the theme to Sanford and Son played over the PA. The band played for about 80 minutes and it was as good of a rock and roll show as anyone could have wanted and a really nice change of material from their last two visits.

To see additional photos from this show click here!