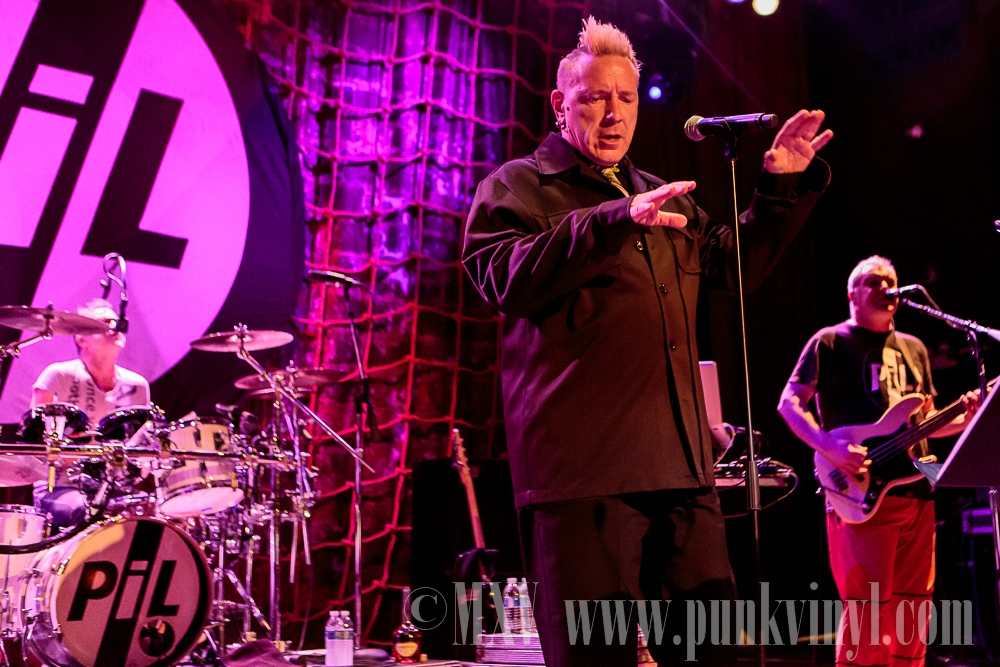 A little less than two years ago, John Lydon (the former Johnny Rotten) ended a very long hiatus and reactivated Public Image Ltd. (PiL for short). Since doing so they’ve kept busy first with a tour and then by recording a new album and now with another tour. They stopped in Chicago Sunday night for “an evening with PiL” at the House of Blues.

There was no opening band so once the room filled up (which didn’t take very long once the doors opened) PiL took the stage. The band filed out first and started playing “This is Not a Love Song” and were quickly joined by Mr. Lydon who took his spot front and center and started singing the opening verse. His voice sounded in fine form and the song was a strong way to start their set as it was one of their more popular early songs. They also reworked it to be a bit more dancey and extended its length to close to ten minutes. After greeting the crowd the band wasted little time starting the second track, “Deeper Water” which is on their new album, This is PiL. The new song sounded excellent and it too was quite lengthy.

John Lydon once said that with PiL he wanted to challenge music and change people’s expectations and with the way they reworked their songs for the live setting, they re-worked their own back catalog. Every song they played was reworked, remixed, and extended. A song like “Flowers of Romance” which was no more than four minutes in length on the album was nearly ten in length this evening. This retooling of the songs worked well in most cases but was a little excessive and repetitive in others. The set list favored Metal Box and This is PiL the most with three songs from each being performed. They played a couple of their more popular “hits” when they played “Disappointed” and “Warrior”, but in a somewhat extended form that came across well and really got the crowd dancing. The contrast of those songs and something like “Albatross” really showed off the diversity that PiL had over their career.

After 11 songs and close to two hours, PiL ended the main part of their set with a very long rendition of “Religion” which was as drawn out and repetitive as it could get. About ten minutes into it, Lydon introduced the various members of his band and turned what they did into a chorus  (for example “we love the drums, we love the bass”). He fixated most on the bass, repeatedly singing ” and we love the bass” while insisting that the sound man turn up the bass. He got his wish as the bass was so incredibly loud that the entire building was humming and rattling and it felt like a massive earthquake. Anyone not wearing earplugs likely experienced some damage after that, especially those up close. When the song came to a close, John took a bow and the band left the stage.

They came back a couple of minutes later for a three song finale that started with, “Out of the Woods” and then immediately went into “Rise” which got a huge round of applause from the audience as people danced and sang along to the line, “Anger is an Energy” which Lydon played up big for the audience participation. The final song of the evening was, “Open Up” which was a cover song and quite a catchy one at that. When the band left the stage for good after saying goodnight and thanking the audience, the band had put in about two hours and ten minutes on stage which was quite a marathon. The show saw some unexpected turns and some questionable omissions but the band stayed true to their vision of being challenging and it paid off more often than not Sunday night.