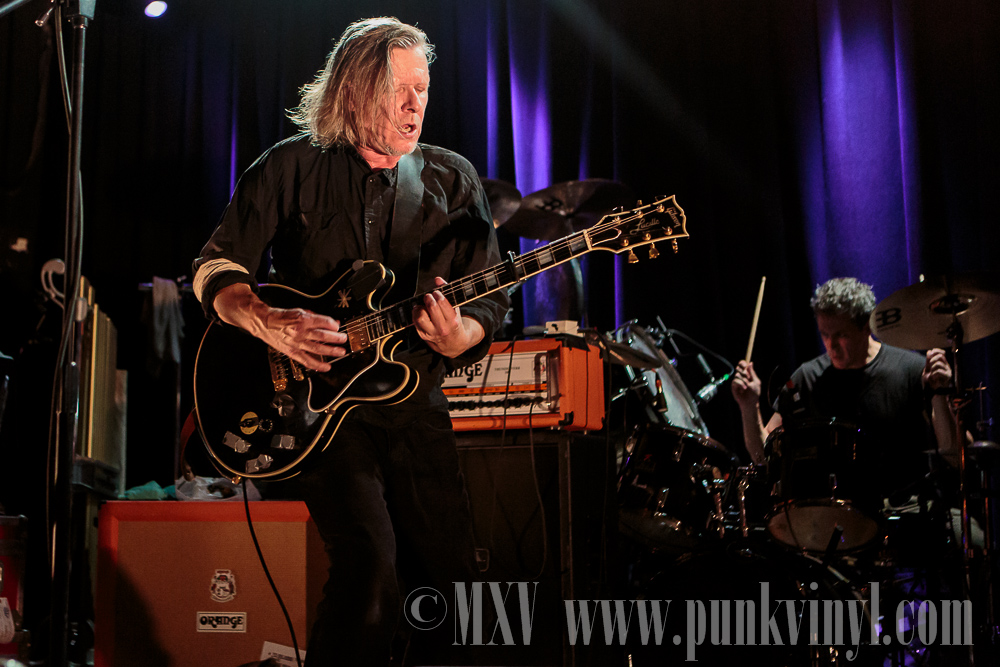 For the third year in a row, the Swans have gone on a fall tour. This is a welcome tradition as until three years ago the band was inactive and seemingly retired. This year they not only brought us another tour but they just released a monumental and incredibly lengthy album called The Seer which clocks in at nearly two hours. This year the band moved venues and had their show at the Metro instead of the Bottom Lounge which gave them a little more stage real estate to fill up with the numerous band members and instruments.

First up was A Hawk & a Hacksaw. This duo played mostly string instruments and an accordion. They were very mellow and mostly instrumental but the female band member did sing on a few songs and she had a really soothing voice. They were rather unorthodox and unexpected and the audience seemed to really appreciate them and gave them a warm round of applause between songs and when they left the stage.

The Swans took the stage next and they opened their show with a new unreleased song called “”To Be Kind”. They were incredibly loud. In fact they were so loud that the entire building was rumbling and even with earplugs in the music was physically painful. We’re talking bone-crushing volume. The song was heavy on the drone and very long and the song would lure you in with its long droning passages that slowly built to a very intense and crushing climax. Much like the new album, The Seer, this song was an amalgam of the Swans evolution of sound and incorporated elements from all eras of the band into the composition. The audience mostly stood in awe and banged their heads during the heavy part and when the song came to completion nearly 15 minutes later, they gave a huge round of applause.

Early Swans records were punishing and they channeled that into the sheer volume of their performance. The show could likely be heard clearly outside the club and down the entire block that the Metro resides on. Those in the audience not wearing ear plugs could be seen holding their ears but few wanted to move from their chosen spots or miss the performance, opting in favor of hearing loss to witness what was a very intense performance.

The band played “Avatar” from the new album and another unrecorded song, “She Loves Us” and that too was heavy on the drone, heavy on intensity, and dangerously loud. The band actually seemed to get louder as their set progressed. They went into their back catalog for only one song, “Coward” which got a huge pop from the crowd when they recognized it. From there it was back to songs from the new album and one more unreleased song. In fact the number of tracks they played from The Seer was equal to the number of unreleased songs they played. Getting to hear even newer (or at least unheard) material was a real treat.

When the band decided they had destroyed enough hearing  of willing victims, they played for well over two hours and put on the most intense show of their last three tours that encompassed everything about the Swans from both the earlier years and recent times and was a spectacle that was exhilarating as well as exhausting. The Swans need to be seen to be believed and this tour took the volume and intensity to the extreme and is well worth witnessing. Just make sure to bring some really good earplugs!