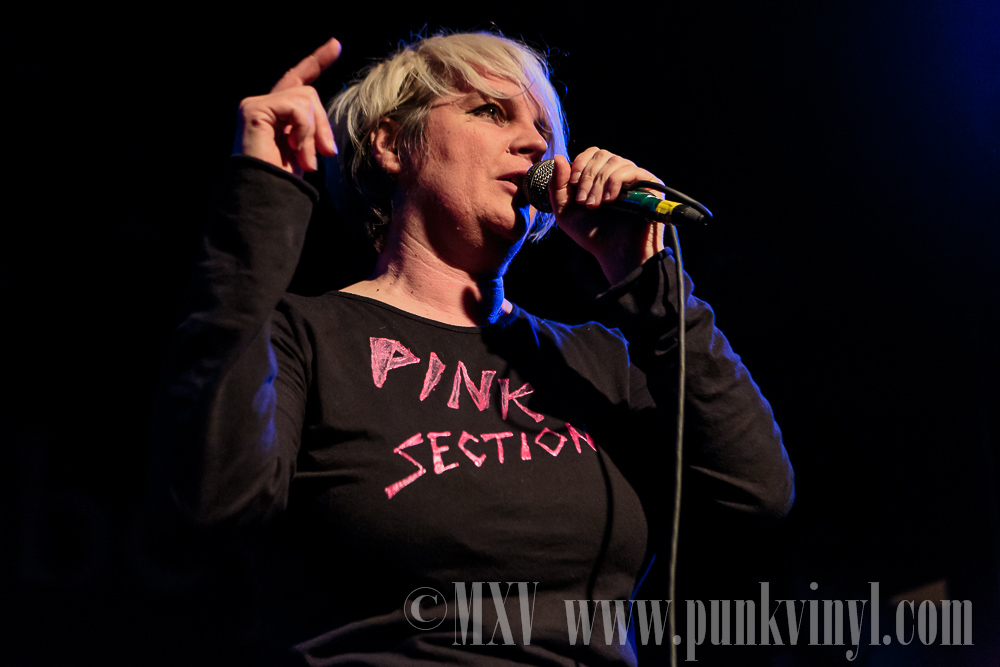 San Francisco punk legends the Avengers played a show here on Sunday night at the Abbey Pub. This was the last stop of only a three city tour and Chicago was lucky enough to be included. It had been a few years since the band toured and Avengers tours in general are a rarity so those who ventured out on a school night were treated to a great show.

First up was The Hecks. This two-piece (guitar and drums) had a late 70’s UK post-punk sound. Their droning guitar was reminiscent of Joy Division and the vocals were presented in a low monotone. For being such young-looking people they sure had a classic influence before their time and their set was pretty enjoyable though the singer/guitarist lacked any sort of stage presence whatsoever and stood there mostly frozen like a mannequin.

R Ring played next. This was also a two-piece featuring Kelley Deal of The Breeders on guitar/vocals and a guy on guitar/vocals. The first half of their set was moody acoustic numbers that were a little on the dull side and they sounded too similar to each other. They got a lot more interesting near the end of their set with some punchy numbers that were more energetic. The most interesting song featured a sewing machine as an additional instrument and they also gave these giant plastic tubes to members of the audience to spin around to add ambient sound to a song. Thankfully the audience consisted of mature adults who not only didn’t take to hitting other crowd members with the plastic tubes but they also returned them to the band when the song finished.

When the member of the Avengers took the stage the crowd had all gathered around the stage and seemed pretty excited. They had a good reason to be as the band doesn’t come around very often and they are one of the best band from their era of punk rock. The lineup featured founding members Greg (guitar) and Penelope (vocals) joined by a younger bassist and drummer who have been playing with them in recent years.

They opened with “We Are the One” from their first single and it sounded as great in 2012 as it did in the 1970s when the record was released. Penelope’s voice sounded as good as ever and she sang with a lot of energy just like she did when the band was around in the old days. Greg’s guitar packed a lot of punch and the band was very tight and played with a lot of enthusiasm. “Thin White Line” quickly followed and people were singing along and bouncing up even a few started to pogo. The bass player was all smiles as he was playing and sharing backup vocal duties with Greg.

From there it was excellent renditions of pretty much the entire LP which includes such classics as “Corpus Christi,” “Desperation,”, “Second to None”, “White Nigger” and more. In what was a real treat and one of the highlights of the set, they played “Cheap Tragedies” which was their song from the Rat Music for Rat People compilation. Penelope’s voice sounded amazing on this song which is probably the most melodic song in the Avengers’ repertoire. That song alone would have justified the ticket price but really the set was as flawless of an Avengers set as you could ask for.

After they played nearly every song they had including their better than the original cover of “Paint it Black”, the band ended their set with “The American in Me” which really pleased the crowd. The band thanked everyone for coming and left the stage but the crowd wanted more so they came back and played “I Believe in Me” to end the evening on an even higher note. When the band left the stage many people went over to the merch table to load up on Avengers items and get an autograph or two and the crowd went home quite happy for having been blown away by this legendary punk rock band who still deliver the goods every time they take the stage.