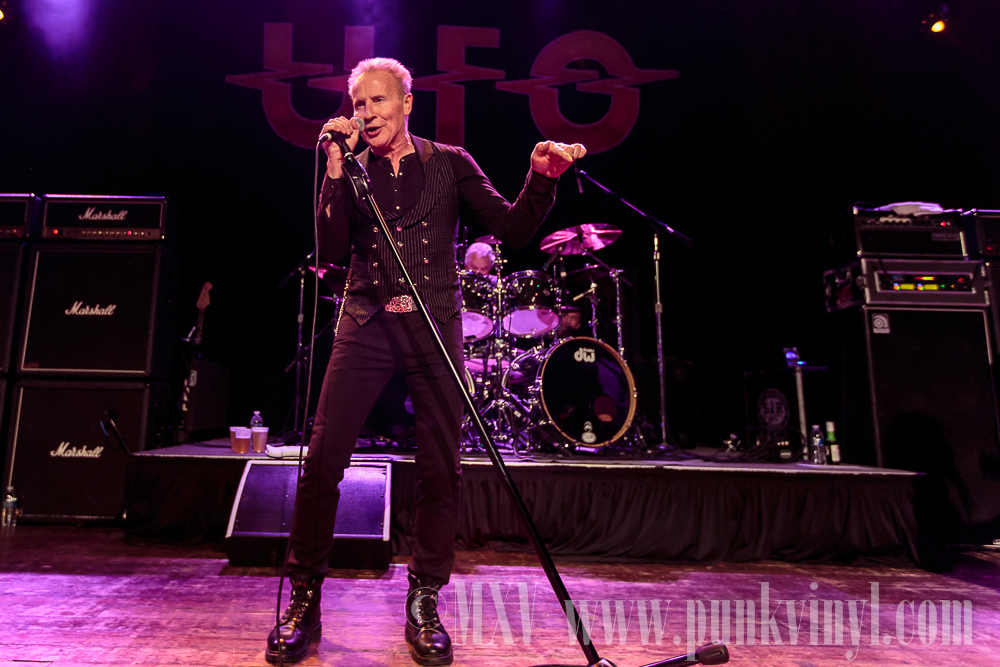 Almost a year and a half exactly to the day of their last visit to Chicago, UFO returned to the House of Blues to kick off another tour. Since their last visit they released a new album and this time out they had a different bass player. The crowd was filled with mostly middle-aged rock and roll fans, many who shared stories with each other about how many times they’ve seen the band over the years and how they saw them back in the old days. The band has a lot of die-hard fans who packed the House of Blues to near capacity Thursday night.

First up was Hessler who are from Chicago but you’d never guess that from the lead singer’s thick accent when she talks between songs. These guys seemed to come through a time machine from the mid to late 1980’s and had a very retro metal sound. In fact they’d probably have been a big hair metal band back in those days if they were born earlier. The female lead singer had a great voice for the style of music and she was also quite easy on the eyes. The band was very flashy in their playing and they had some nice catchy rock tunes that were fun in a nostalgic way.

Just like last time, long-time Chicago rock DJ Byrd (now no longer at WLUP) came out and introduced UFO. When the curtains parted the band was all on stage and they opened with one of their classic hits, “Lights Out” and the crowd was full of bobbing heads and cheers. The band sounded flawless and Phil’s voice sounded as good as ever. The two guitar delivery of Vinnie Moore and Paul Raymond made for a really full sound and both of them are very skilled players with Paul also handling all keyboard duties. They quickly followed with “Mother Mary” which was another old favorite and it sounded every bit as good as the previous song.

The band stopped playing for a minute so Phil could talk to the crowd and he informed them that they’d now be playing some new songs. They started with “Fight Night” and “Wonderland” from their new album, Seven Deadly. They sounded even better live than they did on the album. From there they kept going with some new songs mixed in some old ones. No matter what they played the crowd was into it and heads never stopped bobbing around and many fans sang along to the choruses of their old favorites. After close to 90 minutes of playing the band kicked into an even higher gear by delivering some of their best older hits like “Too Hot to Handle”, “Rock Bottom”, “Doctor Doctor”, and “Shoot Shoot”. At the one hour and 45 minute mark they left the stage and the crowd immediately started chanting “UFO, UFO” to get them back. They obliged and came back to play a 15 minute jam. When they were done playing the members walked to the center of the stage and took a bow as Phil thanked everyone for coming. Two hours had elapsed and UFO once again proved that rock and roll is ageless and that the band can still deliver four decades later.

Click here to see additional photos from this show!