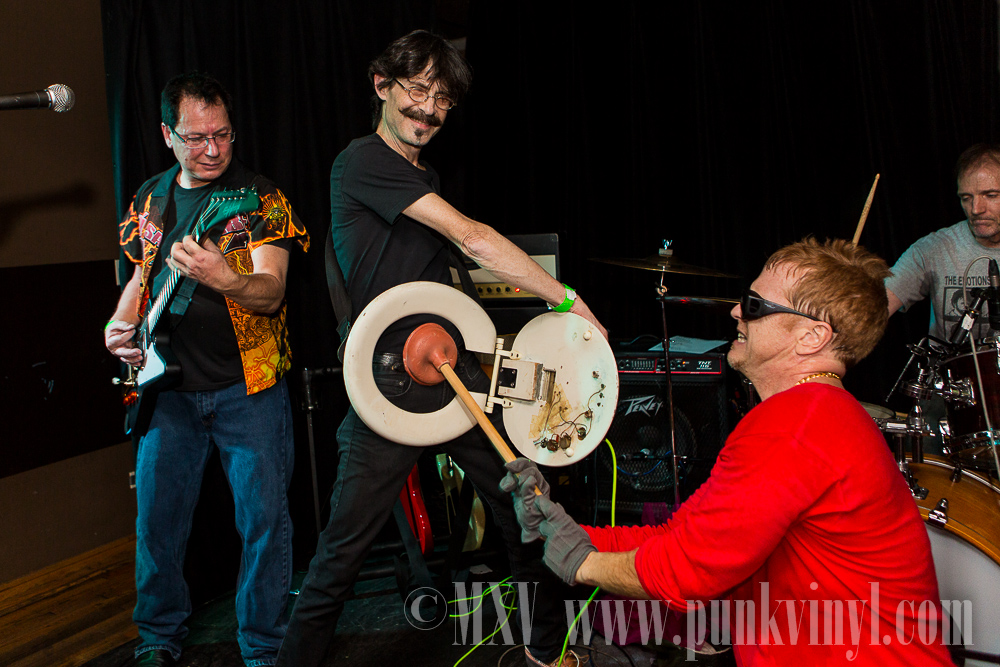 Tutu and the Pirates/Hotlips Messiah 12/21/12 at Township

The world did not end on Friday night despite what some gullible folks would have led you to believe leading up until that day. Those not naive enough to think it was all over Friday night had something fun to ring in the holidays over at Township where Tutu and the Pirates and Hotlips Messiah did a record release show to celebrate the split 7″ they just did together.

First up was Flesh Panthers who played a Stooges/MC5 style low-fi punk rock. They were loud, mid to fast tempo and abrasive. They also did a really bad Nirvana cover that was completely unnecessary . They should have stuck with their own songs but thankfully they kept it short.

Dead Steelmill was second. This was a hardcore band from the 1980’s in Chicago that time forgot. It was a surreal experience seeing these old guys playing hardcore they wrote a quarter century ago. It was hardcore by the numbers back when the numbers were good. The singer now looks like someone’s grandpa who gets drunk and channels his younger hardcore self. It was pretty fun.

Hotlips Messiah took the stage and proceeded to once again prove themselves as Chicago’s best kept secret. Their 70’s punk influenced songs are super catchy with cool keyboards and punchy rhythms. They played a bunch of their usual hits along with the new songs from the split 7″. They were full of energy and despite being sick, Traci Trouble gave a great vocal performance and was bouncing around all over the place. These guys are incapable of being anything but great every time they take a stage and they have a great repertoire of songs. If you haven’t seen them play before make sure to fix that in the near future.

Chicago’s first punk rock band, Tutu and the Pirates, was the last on the bill. Singer, Little Richie Speck, came out in a mask with a tutu on his head and was wearing long johns. They played their infectious and hilarious 70’s style punk rock and roll and it was every bit as fun catchy, and entertaining as ever. It is impossible not to have a good time when these guys are on stage playing and the crowd loved every minute of their set. They played a lot of the classic material plus a couple of new songs (ie: the ones from the single and one other one). People bounced up and down and long-time fans in the audience sang along to the choruses. It’s great that they finally are getting music released and recording new songs after over 30 years and better late than never as these veterans are still one of the best bands around! They ended the evening on an extremely fun note by having Traci Trouble join them for their final song and it was a fun way to end the evening and ring in the Christmas holiday.